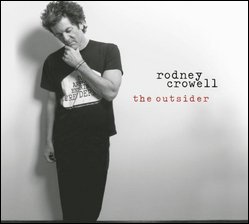 Rodney Crowell (born August 7, 1950) is an American musician, known primarily for his work as a singer and songwriter in country music. Crowell has had five number one singles on Hot Country Songs, all from his 1988 album Diamonds & Dirt. He has also written songs and produced for other artists.

He has won two Grammy Awards in his career, one in 1990 for Best Country Song for the song "After All This Time" and one in 2014 Best Americana Album for his album "Old Yellow Moon".

Crowell was born on August 7, 1950 in Crosby, Texas, to James Walter Crowell and Addie Cauzette Willoughby [1]

He came from a musical family, with one grandfather being a church choir leader and the other a bluegrass banjo player. His grandmother played guitar and his father sang semi-professionally at bars and honky tonks.[2] At age 11, he started playing drums in his father's band. In his teen years, he played in various garage rock bands in Houston, performing hits of the day mixed with a few country numbers.[2]

In August 1972 he moved to Nashville, Tennessee, in search of a musical career and got a job as a songwriter after being discovered by Jerry Reed.[2] He later met and befriended fellow songwriter Guy Clark, who became a major influence on his songwriting and vice versa.[3][4] While there, he said, "I got a real cold splash in the face of what real songwriting is about. I started filling my mind with as many symbols and images as I could. I started reading. I got real hungry to have something to contribute".[3] Emmylou Harris had recorded one of Crowell's songs, "Bluebird Wine", on her Pieces of the Sky album and made a request to meet him. After he sat in with Emmylou at her gig at the Armadillo World Headquarters in early January 1975, she asked him to play rhythm guitar in her backing band, The Hot Band. He accepted and left the following day to join Emmylou in Los Angeles.[3][5]

In 1977 as a side project, he formed a musical group, The Cherry Bombs, together with Vince Gill, Tony Brown and others.[6] One year later, he signed a solo deal with Warner Bros. Records and in late 1978, released his debut album, Ain't Living Long Like This.

His debut album, as well his following two albums, But What Will the Neighbors Think and Rodney Crowell, were not commercially successful despite garnering a huge cult following. Crowell himself criticized his debut album for not translating onto vinyl the same clarity and energy he felt in the studio. His single "Ashes by Now" from "But What Will the Neighbors Think" reached No. 37 on the Billboard Hot 100 in 1981.

Though he had already several country hits by artists covering his songs (including "Ain't Living Long Like This" by Waylon Jennings, "Leaving Louisiana..." by the Oak Ridge Boys, and several covers by Johnny Cash, Rosanne Cash, Emmylou Harris, Jerry Reed and others), Crowell got his first big taste of pop songwriting success with "Shame on the Moon". "Shame on the Moon" was recorded on the 1982 album "The Distance" by Bob Seger & the Silver Bullet Band. Glenn Frey joined Seger on background harmony on the song. Appealing to a broad cross-section of listeners, the song spent four weeks at number two on the Billboard Hot 100 pop singles chart, topped the adult contemporary chart, and placed in the Top 15 of the country chart in early 1983. The song's dark, poetic and hypnotic style helped boost Crowell's cult status.

The album Rodney Crowell was released in 1981 (see 1981 in country music) by Warner Bros. Records and was his last album on that label before switching to Columbia. The first album Crowell produced by himself, it reached No. 47 on the Top Country Albums chart and No. 105 on the Billboard 200 albums chart. The songs "Stars on the Water" and "Victim or a Fool" were released as singles. "Stars on the Water" reached No. 30 on the Hot Country Songs chart, Crowell's highest charting song up to that point. It peaked at No. 21 on the Canadian country charts. "Victim or a Fool" reached No. 34 in the U.S.

In 1981, Rodney left Warner Bros.' roster, putting his career on hold to produce several of his wife Rosanne Cash's albums.[3]

In 1983 Crystal Gayle had a number one Country single with his song "'Til I Gain Control Again" from her first Elektra album, "True Love". The song was first recorded in 1975 by Emmylou Harris.

After producing Rosanne Cash's Rhythm & Romance, Crowell signed to Columbia Records in 1986. His first album for that label, Street Language, was co-produced with Booker T. Jones and featured a blend of Soul and country music.[7] The album did not chart.

Although best known as a songwriter and alternative country artist, Crowell enjoyed mainstream popularity during the late 1980s and early 1990s. His critically acclaimed album 1988's Diamonds & Dirt produced five consecutive No. 1 singles during a 17-month span in 1988 and 1989: "It's Such a Small World" (a duet with Cash), "I Couldn't Leave You If I Tried," "She's Crazy For Leavin'," "After All This Time" and "Above and Beyond" (a cover of Buck Owens' 1962 hit). Crowell's "After All This Time" won the 1990 Grammy Award for Best Country Song. His follow-up album, 1989's Keys to the Highway, produced two top 5 hits in 1990, which were "Many a Long and Lonesome Highway" and "If Looks Could Kill."

After 1992's Life Is Messy, he left Columbia Records and signed to MCA Records where he released two more albums — Let the Picture Paint Itself and Jewel of the South.

Crowell continued to enjoy success as a songwriter in the 1990s and 2000s. Crowell's songs that reached to Top Ten in the country charts in the decade included "Song for the Life" by Alan Jackson, "Making Memories of Us" by Keith Urban, "Ashes By Now" by Lee Ann Womack, and "Please Remember Me" by Tim McGraw.

In 2001, after a brief hiatus from recording, Crowell released The Houston Kid on Sugar Hill Records, his first studio album since 1995's Jewel of the South. Many songs on the album were semi-autobiographical, and the album included a duet Crowell had recorded and released as a single in 1998 with his ex father-in-law Johnny Cash, "I Walk the Line (Revisited)". Crowell followed up this effort with Fate's Right Hand in 2003 and The Outsider in 2005, both of which appeared on Columbia Nashville, a division of Sony Music. Leading critics and Crowell consider these three albums his finest work as a solo artist.

Rodney Crowell was inducted into the Nashville Songwriters Hall of Fame in 2003 with fellow inductees Hal Blair, Paul Overstreet and John Prine.

2004 saw the release of The Notorious Cherry Bombs, a reunion of Crowell's 1970s road band, including Vince Gill and Tony Brown. The future Keith Urban hit "Making Memories of Us" was included on this disc. In 2005, Crowell served as producer for established Irish singer/songwriter Kieran Goss on the album "Blue Sky Sunrise".

In 2007, Rodney Crowell was inducted into the Music City Walk of Fame.

Crowell released his next album, Sex and Gasoline, on Yep Roc Records in 2008, ending his relationship with Sony Music. The album received a Grammy nomination for Best Contemporary Folk/Americana Album.[8] Crowell figures prominently in musician-neuroscientist Daniel Levitin's book The World in Six Songs for which he was interviewed, and three Crowell songs, "Shame On The Moon," "I Know Love Is All I Need" and "I Walk the Line (Revisited)" are featured in the book.

In 2009, Crowell wrote Wynonna Judd's title track to her album Sing: Chapter 1, which also was released in 2009. The song was given several electronic dance music remixes, and sent to dance radio as Judd's second release from the album. In August 2009, the single reached No. 4 on the U.S. Billboard Hot Dance Club Songs chart.

Crowell produced Chely Wright's 2009 album, Lifted Off the Ground. Wright also made a cameo appearance in Crowell's 2008 music video for his single "Sex and Gasoline".

In 2012, Vanguard Records released KIN: Songs by Rodney Crowell and Mary Karr. Karr wrote the lyrics and Crowell set them to music. KIN was Karr's first foray into songwriting. Crowell performed four tracks on the album; one as a duet with Kris Kristofferson. A variety of other artists recorded the other songs on the album, including Norah Jones, Vince Gill, Lucinda Williams, Lee Ann Womack, Rosanne Cash, Kris Kristofferson and Emmylou Harris.

On February 26, 2013, Crowell and Emmylou Harris released Old Yellow Moon on Harris' longtime label Nonesuch Records. The album reached Number 4 on Billboard's Country albums chart and Number 29 on the Billboard Hot 200 charts. In 2013, the album won the Americana Music Awards' Album of the Year award and Crowell and Harris were named group/duo of the year. On January 26, 2014, Crowell won his second Grammy Award when Old Yellow Moon won the Grammy for Best Americana Album.[10] On 11 May 2015, Crowell and Emmylou Harris released The Traveling Kind on Nonesuch Records.

Crowell released his first album on New West Records, Tarpaper Sky, on April 15, 2014. Crowell co-produced the record with his long-time collaborator, Steuart Smith. In the fall of 2014, Crowell was hired as music director for the Hank Williams biopic I Saw the Light.[11]

In 2015, Crowell provided background vocals on "It Doesn't Hurt Right Now", a song he co-wrote with Jewel for her album Picking Up the Pieces as well as on "Holy War", a track which appears on I Am the Rain, a 2016 album by Chely Wright. On December 20, 2016, Crowell released a music video for the song "It Ain't Over Yet", which features guest vocals from Rosanne Cash and John Paul White as well as harmonia from Mickey Raphael. The song appears on his forthcoming album Close Ties, which was released in 2017. It has been confirmed that the album also features a duet with Sheryl Crow titled "I'm Tied To Ya".[12]

In 1975 Crowell married his Nashville girlfriend Martha, and their daughter Hannah was born in May 1976. The brief marriage ended in divorce, with Crowell retaining custody of Hannah.[13] Crowell was subsequently married to Rosanne Cash (daughter of Johnny Cash) from 1979 to 1992 and they had an influence on each other's careers, with Crowell producing most of her albums during that period and her success influencing his songwriting. They collaborated on a number of duets, including 1988's "It's Such a Small World." Although Crowell and Cash are now divorced, they remain on friendly terms, performing together occasionally. Crowell and Cash have three daughters, Caitlin (b. 1980), Chelsea (b. 1982), and Carrie (b. 1988). Crowell married Claudia Church in 1998 and they share a home south of Nashville with their dog, Mono.

This article uses material from the article Rodney Crowell from the free encyclopedia Wikipedia and it is licensed under the GNU Free Documentation License.