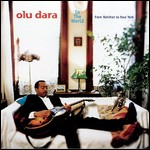 Olu Dara Jones (born Charles Jones III, January 12, 1941) is an American cornetist, guitarist, and singer. He is the father of rapper Nas.

In 1963, he moved to New York City and changed his name to Olu Dara,[3][4] which means "God is good" in the Yoruba language.[4] In the 1970s and '80s he played alongside David Murray, Henry Threadgill, Hamiet Bluiett, Don Pullen, Charles Brackeen, James Blood Ulmer, and Cassandra Wilson. He formed two bands, the Okra Orchestra and the Natchezsippi Dance Band.[1][3]

His first album, In the World: From Natchez to New York (1998), revealed another aspect of his musical personality: the leader and singer of a band immersed in African-American tradition, playing an eclectic mix of blues, jazz, and storytelling, with tinges of funk, African popular music, and reggae. His second album Neighborhoods, with guest appearances by Dr. John and Cassandra Wilson, followed in a similar vein.

This article uses material from the article Olu Dara from the free encyclopedia Wikipedia and it is licensed under the GNU Free Documentation License.