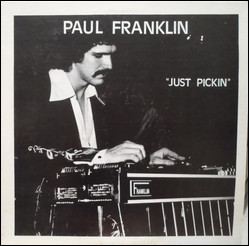 Paul V. Franklin (born May 31, 1954[1] in Detroit, Michigan[2]) is an American multi-instrumentalist, known mainly for his work as a steel guitarist. He began his career in the 1970s as a member of Barbara Mandrell's road band; in addition he toured with Mel Tillis and Jerry Reed. He has since become a prolific session musician in Nashville, Tennessee, playing on more than 500 albums.[3][4] He has been named by the Academy of Country Music as Best Steel Guitarist on several occasions.[3] In addition to the pedal steel guitar and lap steel guitar, Franklin plays Dobro, fiddle, and drums,[3] as well as three custom-built instruments called the Pedabro, The Box, and the baritone steel guitar.

He is noted for bringing multiple musical innovations to the country music scene.[4] One of these, the Pedabro, is a type of Dobro fitted with a pedal and played like a pedal steel guitar. This was invented by Franklin's father. The first of many hit records featuring the Pedabro was Forever and Ever, Amen by Randy Travis.[5]

Franklin has also created two new variations of steel guitars, the first of which is a type of lap steel guitar nicknamed "The Box", whose sound has been described as a "swampy acoustic guitar".[4] The other type of guitar that he invented is the baritone steel guitar, the strings of which are tuned an octave lower than a traditional pedal steel guitar.[4]

Franklin is a member of The Time Jumpers, a country and bluegrass band. In July 2013, he and Vince Gill released a collaborative album called Bakersfield.[6]

This article uses material from the article Paul Franklin (musician) from the free encyclopedia Wikipedia and it is licensed under the GNU Free Documentation License.

Joseph Haydn 1. Satz aus dem Klaviertrio As-Dur
Update Required To play the media you will need to either update your browser to a recent version or update your Flash plugin.