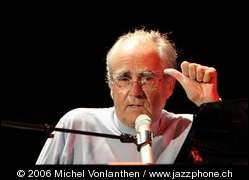 Michel Legrand (born 24 February 1932) is a French musical composer, arranger, conductor, and jazz pianist. Legrand is a prolific composer, having written over 200 film and television scores, in addition to many memorable songs.[1] He is best known for his often haunting, jazz-tinged film music. His celebrated scores for the films of French New Wave director Jacques Demy, The Umbrellas of Cherbourg (1964) and The Young Girls of Rochefort (1967), earned Legrand his first Academy Award nominations. Legrand won his first Oscar for the song "The Windmills of Your Mind" from The Thomas Crown Affair (1968).[2]

Legrand was born in the Bécon les Bruyères district of Courbevoie, a suburb of Paris. His father Raymond Legrand was a conductor and composer renowned for hits such as Irma la douce, and his mother was Marcelle Ter-Mikaëlian (sister of conductor Jacques Hélian), who married Raymond Legrand in 1929. His maternal grandfather was of Armenian descent and was considered a member of the bourgeoisie.[3]

Legrand has composed more than two hundred film and television scores and several musicals and has recorded over a hundred albums. He has won three Oscars (out of 13 nominations) and five Grammys and has been nominated for an Emmy. He was 22 when his first album, I Love Paris, became one of the best-selling instrumental albums ever released. He is a virtuoso jazz and classical pianist and an accomplished arranger and conductor who performs with orchestras all over the world.

He studied music at the Paris Conservatoire from 1943 to 1950 (ages 11–18), working with, among others, Nadia Boulanger, who also taught many other composers, including Aaron Copland, Philip Glass, and Ástor Piazzolla. Legrand graduated with top honors as both a composer and a pianist.[3]

Legrand has also contributed significant work in jazz.[4] While on a visit to the U.S. in 1958, Legrand collaborated with such musicians as Miles Davis, John Coltrane, Bill Evans, Phil Woods, Ben Webster, Hank Jones, and Art Farmer in an album of inventive orchestrations of jazz standards titled Legrand Jazz. The following year, back in Paris with bassist Guy Pedersen and percussionist Gus Wallez, he recorded an album of Paris-themed songs arranged for jazz piano trio, titled Paris Jazz Piano. Nearly a decade later he recorded At Shelly's Manne-Hole (1968), a live trio session with bassist Ray Brown and drummer Shelly Manne, in which four of the compositions were improvised on the spot. Legrand also provided an odd scat vocal on "My Funny Valentine". Legrand returned to his role as jazz arranger for the Stan Getz album Communications '72 (recorded in December 1971) and resumed his collaboration with Phil Woods on Le Jazz Grand (1978) and After the Rain (1982); then, he collaborated with violinist Stephane Grappelli on an album in 1992. Not as well received as his earlier work in the field of jazz was a 1994 album for LaserLight entitled Michel Plays Legrand. Later, in 2002, he recorded a solo jazz piano album reworking 14 of his classic songs, Michel Legrand by Michel Legrand. His jazz piano style is virtuosic and eclectic, drawing upon such influences as Art Tatum, Erroll Garner, Oscar Peterson, and Bill Evans.

In 1966, he made the arrangements of the international song "C'est si bon" by Henri Betti and André Hornez for the Barbra Streisand album Color Me Barbra. In 1948, his father Raymond Legrand had conducted the orchestra for the recording of this song by Les Soeurs Étienne.

A number of his songs, including "What Are You Doing the Rest of Your Life?", "Watch What Happens", "The Summer Knows", and "You Must Believe in Spring", have become jazz standards covered frequently by other artists.

Legrand has also recorded classical piano pieces by Erik Satie and American composers such as Amy Beach, George Gershwin, Aaron Copland, John Cage, and Conlon Nancarrow. He is a prolific recorder of jazz, popular and classical music albums, having released over one hundred.[5]

Legrand is known principally as a composer of innovative music for films, composing film scores (about two hundred to date) for directors Jean-Luc Godard, Richard Brooks, Claude Lelouch, Clint Eastwood, Barbra Streisand, Robert Altman, Joseph Losey, and many others. Legrand himself appears and performs in Agnès Varda's Cleo from 5 to 7 (1961). After his songs appeared in Jacques Demy's films The Umbrellas of Cherbourg (1964) and The Young Girls of Rochefort (1966), Legrand became known internationally. The Umbrellas of Cherbourg was a sung-through musical in which all the dialogue was set to music, an unusual concept at the time.

Hollywood soon became interested in Legrand after The Umbrellas of Cherbourg, bombarding him with requests to compose music for films. Having begun to collaborate with Hollywood, Legrand continued to work there for many years. Among his best-known scores are those for The Thomas Crown Affair (1968), which features the hit song "The Windmills of Your Mind", The Lady in the Car with Glasses and a Gun (1970), The Go-Between and Summer of '42 (1971), the last of which features another hit song, "The Summer Knows". Legrand also wrote the score for Orson Welles's last-completed film, F for Fake (1974) and would later compose the score for Welles’s posthumously-released movie The Other Side of the Wind (2018). He also composed the score for Yentl (1983), as well as the film score for Louis Malle's 1980 Drama/Crime film called Atlantic City starring Burt Lancaster and Susan Sarandon which is entirely filmed in and around Atlantic City two years after gambling was legalized with the city's first Hotel/Casino called Resorts which opened on May 16th 1978.

Legrand's instrumental version of the theme from Brian's Song charted for eight weeks in 1972, peaking at #56.[7]

Currently, Legrand divides his time between America and France.

Legrand composed the score for the musical Amour, which premiered in 2002 on Broadway and was translated into English by Jeremy Sams and was directed by James Lapine.[9] This musical was his Broadway debut, and while it ran for only 17 performances and 31 previews, it garnered a loyal fan base due to its much-praised cast album on Ghostlight Records, and subsequent multiple Tony Award nominations (2003), including Best Score for Michel Legrand and Best Actress for its leading actress Melissa Errico.[10]

Legrand continued his collaboration with Errico to the present day, appearing at such jazz venues as Dizzy's at Lincoln Center. Though he has rarely done this for any solo artist, Michel Legrand arranged, conducted and accompanied Errico with a 100-piece symphony on her CD "Legrand Affair" (released in October 2011 on Ghostlight Records) featuring his songs, hidden French gems, as well as one new song with lyrics by Alan and Marilyn Bergman.[11] The CD was produced by Phil Ramone[12] and is featured in Ramone's 2007 book Making Records: The Scenes Behind the Music.

The world premiere of the new musical Marguerite from Alain Boublil and Claude-Michel Schönberg, the creators of Les Misérables and Miss Saigon, included music by Michel Legrand and lyrics by Herbert Kretzmer. Marguerite is set during World War II in occupied Paris, and was inspired by the romantic novel La Dame aux camélias by Alexandre Dumas, fils. It premiered in May 2008 at the Haymarket Theatre, London and was directed by Jonathan Kent.[13][14]

Legrand has won three Oscars (out of 13 nominations), five Grammys, and has been nominated for an Emmy. The following are some of the awards and nominations with which Legrand's works have been honored:

This article uses material from the article Michel Legrand from the free encyclopedia Wikipedia and it is licensed under the GNU Free Documentation License.