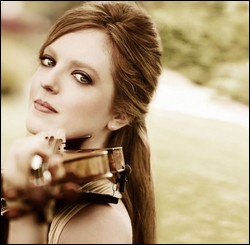 Rachel Barton Pine (born Rachel Elizabeth Barton, October 11, 1974) is an American violinist. She debuted with the Chicago Symphony at age 10, and was the first American and youngest ever gold medal winner of the International Johann Sebastian Bach Competition.[2] The Washington Post wrote that she "displays a power and confidence that puts her in the top echelon."[3]

Pine tours worldwide as a soloist with prestigious orchestras, has an active recording career, and has run The Rachel Barton Pine Foundation since 2001 which provides services and funding to promote classical music education and performances.[4]

Pine was born in Chicago, and began playing the violin at age 3 after being inspired by the example of older girls playing at her church. She debuted with the Chicago String Ensemble at age 7, and with the Chicago Symphony under the baton of Erich Leinsdorf at age 10. Her passion for violin compelled her to practice 4 or 5 hours a day as a second grader, prompting her elementary school principal to encourage her parents to begin home schooling,[5] which allowed her to focus on her music, practicing 8 hours a day. Her principal teachers were Roland and Almita Vamos of the Music Institute of Chicago. At age 14, she began taking paid gigs playing at weddings and in orchestras, which allowed her to contribute significantly to her family’s income as they experienced financial difficulties. Explaining how she managed, she says, "I put on a lot of makeup and pretended I was older than I was."[6]

Her festival appearances include Marlboro, Ravinia, Montreal, Wolf Trap, Vail, Davos, and Salzburg's Mozartwoche at the invitation of Franz Welser-Möst.

In addition to her mixed recital programs, Pine has regularly given single evening performances of the six Bach Sonatas and Partitas,[10] the 24 Paganini Caprices,[11] and the complete Brahms Sonatas.

Her 2013 recording with pianist Matthew Hagle, Violin Lullabies, debuted at number one on the Billboard classical chart.[17] Pine’s recording of Violin Concertos by Black Composers of the 18th and 19th Centuries was nominated for a National Public Radio Heritage Award.[18]

Carl Fischer Music recently published a sheet music book of cadenzas and virtuosic encore pieces composed by Pine, as well as her arrangements of other works for violin and piano, as part of its Masters Collection. Pine became the first living composer and first woman to be so honored.[19] Pine has also edited a 4-volume collection of compositions associated with America's pioneering female solo violinist Maud Powell,[20][21] many of which she has also recorded.[22] In 2014. Pine helped to accept a posthumous Lifetime Achievement Grammy Award on behalf of Maud Powell, after successfully campaigning the Recording Academy for honor.[23]

Her musical interests extend well beyond classical to baroque, folk, Celtic, rock, and jazz. She regularly instructs at Mark O'Connor's annual summer fiddle camp, and in 2004 she released a CD in collaboration with Scottish fiddler Alasdair Fraser.

Pine performs chamber music as part of Trio Settecento with David Schrader and John Mark Rozendaal, and with the Jupiter Chamber Players. In 2015, Trio Settecento released Veracini’s Complete Sonate Accademiche for Violin and Continuo.[24] The Trio’s Grand Tour collection of four CDs on Cedille Records takes listeners on a country-by-country of the European Baroque.

Her current principal instrument is the 1742 'ex-Bazzini, Soldat' violin of Guarneri del Gesu. For seventeenth- and eighteenth-century pieces, she prefers to use an unaltered 1770 instrument of Nicolò Gagliano I.[25]

Her taste in rock runs to heavy metal, with AC/DC, Anthrax, Black Sabbath, Led Zeppelin, Megadeth, Metallica, Motörhead, Pantera, Slayer, and Van Halen being among her favorites.[7][26] She has met and played with a number of these. In 1997, she released a heavy-metal-inspired recordings. “In practicing and preparing those songs, I discovered that a lot of the heavy metal I’d been listening to was some of the most sophisticated compositionally of all rock music, and very inspired by classical music,” Pine has said, “Then all these people in ripped jeans started coming to my concerts.” [27]

In February 2009, she joined the thrash/doom metal band Earthen Grave, where she performs on a 6-string Viper electric violin. The band has shared the stage with metal bands such as Pentagram, Black Label Society, Mayhem, and Nachtmystium. The group released an EP, Dismal Times.[28] Doommantia.com proclaimed that Earthen Grave has "all the songwriting capabilities to make one of the best albums ever."[29] and HellrideMusic.com said "If the doom gods are with us, this band will stay around and continue to produce the kind of unique, powerful and thoughtful music contained on Dismal Times."[30] Pine credits her experience playing in a rock band with improving her emotional rapport with her audiences.[31]

Pine often brings a new twist to her coaching sessions with chamber music and youth orchestras, by incorporating orchestral versions of rock pieces into her sessions. For example, Pine offered the world premiere of her own arrangement of Metallica's "Master of Puppets" with the McHenry County Youth Symphony (Crystal Lake, IL) in November 2009. In May 2015 she premiered her “Shredding with the Symphony” program with the Lafayette Symphony, which features music from Shostakovich, Bruch, Beethoven, Vivaldi, Sibelius, and Paganini as well as Van Halen, AC/DC, Black Sabbath, Rush, Nirvana, Metallica and Led Zeppelin.[32]

Bill McGlaughlin called her a "musical Pac-Man" for her ability to take in and perform so many different kinds of music.[33] She has often performed at schools and on rock music radio stations in an effort to interest younger audiences in classical music.

Pine was inducted as an honorary member of Sigma Alpha Iota in 2003.[8] She performed at the music fraternity's 45th national convention during summer 2009 in Chicago.

On July 11, 2010, Pine gave a three-part performance at Chicago's Millennium Park as part of the Great Performers of Illinois celebration. After initially performing on baroque violin with Trio Settecento, she soloed in the Tchaikovsky Violin Concerto with the Illinois Symphony Orchestra and then switched gears again to perform in black leather on her electric violin with Earthen Grave. In conjunction with the event, she received the 2010 Great Performer of Illinois award.[34][35]

In 2010, Pine participated in a tribute album titled Mister Bolin's Late Night Revival, a compilation of 17 previously unreleased tracks written by guitar legend Tommy Bolin prior to his death in 1976. The CD includes other artists such as HiFi Superstar, Doogie White, Eric Martin, Troy Luccketta, Jeff Pilson, Randy Jackson, Rex Carroll, Derek St. Holmes, Kimberley Dahme, and The 77's. A percentage of the proceeds from this project will benefit the Jackson Recovery Centers.[36]

On April 22, 2017, Pine performed solo vioin with the Phoenix Symphony under the baton of Tito Munoz debuting the Violin Conceto, "Dependent Arising" by Earl Maneein (b. 1976) and dazzled the audience with an encore of Niccolo Paganini's 5th Caprice.

Pine started a foundation in 2001 to promote the study and appreciation of classical music, including string music by black composers. It prepares music curricula on black composers, loans high-quality instruments to deserving young musicians, and provides grants to cover incidental expenses (such as for supplemental lessons, accompanists, sheet music, travel, competition entrance fees, instrument repair, and audition recordings) of students and young professional musicians. Another program, Global HeartStrings, is dedicated to supporting aspiring classical musicians from developing countries.[37] In this effort, Barton Pine has been aided by a younger sister, Hannah Barton, also a violinist.[38]

In 2006, after being nominated by Chicago Mayor Richard M. Daley, Barton Pine received the Studs Terkel Humanities Service Award for her work through the foundation.[39] She has also been given the 2012 Karl Haas Prize for Music Education for this work and her other education-related efforts.[40]

A Stradivarius violin, the 'Arkwright Lady Rebecca Sylvan', was donated to the foundation by Joseph Sylvan in 2015.[41][42]

On January 16, 1995, Pine was severely injured in a train accident in the suburb of Winnetka, where she taught violin lessons.[2][43][44][45][46] As she was exiting a Metra commuter train with her violin over her shoulder, the doors closed on the strap to her case, pinning her left shoulder to the train. The doors, which were controlled remotely and had no safety sensors, failed to reopen, and she was dragged 366 feet (112 meters) by the train before being pulled underneath and run over, severing one leg and mangling the other. Pine was saved by the prompt application of tourniquets by several passengers who disembarked from the train after pulling its emergency brake handles.[43]

She sued Metra and the Chicago and North Western Transportation Company for compensation for her injuries and legal and medical expenses. Metra argued that she made the choice not to extricate her arm from the strap of the violin case due to the value of the instrument, a 400-year-old Amati valued at around $500,000, and thus she carried most of the blame for her injuries. The jury ruled in Pine's favor.[44] Metra changed its conductor safety procedures following the incident and made other changes to the trains themselves.

The esteem in which she was held by the classical music community was highlighted when Daniel Barenboim, the conductor of the Chicago Symphony Orchestra organized a benefit concert and raised over $75,000 after she was injured.[43] After a two-year hiatus to allow for recovery from her injuries, aided by numerous surgeries and physical therapy, Pine resumed her career.[2]

This article uses material from the article Rachel Barton Pine from the free encyclopedia Wikipedia and it is licensed under the GNU Free Documentation License.