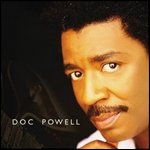 Doc Powell is an American jazz guitarist and composer. He was born and raised in Spring Valley, New York. He attended college at University of Charleston.[1]

Powell's debut album, Love Is Where It's At (1987), received a Grammy nomination for Best R&B Instrumental for his cover of Marvin Gaye's "What's Going On". His credits include work on the music for the feature films The Five Heartbeats and Down and Out in Beverly Hills.[2]

This article uses material from the article Doc Powell from the free encyclopedia Wikipedia and it is licensed under the GNU Free Documentation License.