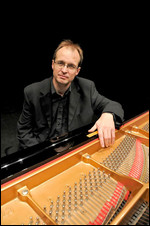 Benjamin Frith (born 1957 in South Yorkshire) is a British classical pianist. He was educated at the University of Leeds and graduated with a BA in Music in 1979. Subsequently, he studied under Fanny Waterman and won several awards early in his career, including the Gold Medal at the 1989 Arthur Rubinstein Piano Competition in Israel. He has performed regularly with several major international orchestras and conductors, including Zubin Mehta, and has performed at the Edinburgh International Festival.

This article uses material from the article Benjamin Frith from the free encyclopedia Wikipedia and it is licensed under the GNU Free Documentation License.

Antonio Vivaldi Oboenkonzert a-moll
Update Required To play the media you will need to either update your browser to a recent version or update your Flash plugin.