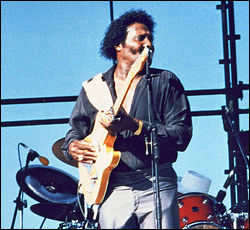 Albert Collins (October 1, 1932 November 24, 1993)[1] was an American electric blues guitarist and singer with a distinctive guitar style. Collins was noted for his powerful playing and his use of altered tunings and capo. His long association with the Fender Telecaster led to the title "The Master of the Telecaster".[2]

Albert Collins was born in Leona, Texas, on 1 October 1932.[3] He was introduced to the guitar at an early age through his cousin Lightnin' Hopkins, also a Leona resident, who frequently played at family associations (reunions). In 1938 his family relocated to Marquez, Texas, eventually settling in Houston, Texas, in 1941[4] where he later attended Jack Yates High School.[5] Collins initially took piano lessons when he was young but during periods when his piano tutor was unavailable his cousin Willow Young would loan him his guitar and taught Collins the altered tuning that he used throughout his career.[4] At the age of twelve, he made the decision to concentrate on learning the guitar after hearing "Boogie Chillen'" by John Lee Hooker. At eighteen Collins started his own group called the Rhythm Rockers in which he honed his craft while remaining in employment including four years working on a ranch in Normangee, Texas, followed by twelve years of driving a truck for various companies.[4][5] Collins initially played an Epiphone guitar during his first two years with the Rhythm Rockers but in 1952 after seeing Clarence "Gatemouth" Brown playing a Fender Esquire he decided to purchase a Fender. Collins had wanted to buy a Telecaster but due to their cost he opted instead to buy an Esquire which he then took to the Parker Music Company in Houston to have it fitted with a genuine Telecaster neck; this would remain his main guitar up until his move to California and the guitar that he used on his earliest recordings including his signature song "Frosty".[4] In 1954 Collins, then aged 22 and still without a record release, was joined in the Rhythm Rockers by the 17 year old Johnny Copeland who had just left the Dukes of Rhythm (a band he had started with Houston blues musician Joe "Guitar" Hughes).[6]

Collins started to play regularly in Houston most notably at Shady's Playhouse where James "Widemouth" Brown (brother of Clarence "Gatemouth" Brown) and other well-known Houston blues musicians would meet for the Blue Monday jams.[7][8] By the mid 1950s he had established his reputation as a local guitarist of note and had started to appear regularly at a Fifth Ward club called Walter's Lounge with the group Big Tiny and the Thunderbirds.[9][10] The saxophonist and music teacher Henry Hayes had heard about Collins from Joe "Guitar" Hughes. After seeing him perform live Hayes encouraged Collins to record a single for Kangaroo Records; a label he had started with his friend M. L. Young.[11] Collins recorded his debut single "The Freeze" b/w "Collins Shuffle" for Kangaroo Records at Gold Star Studios, Houston, in the spring of 1958 with Henry Hayes on saxophone.[12] Texas blues bands of this period incorporated a horn section and Collins later credited Henry Hayes with teaching him how to arrange for horns.[4] In 1964 he recorded "Frosty" at Gulf Coast Recording Studio, Beaumont, Texas, for Hall Records owned by Bill Hall, who had signed Collins on the recommendation of Cowboy Jack Clement; a songwriter and producer who had engineered sessions for Jerry Lee Lewis and Johnny Cash at Sun Records.[13] His debut album The Cool Sounds Of Albert Collins was released in 1965 on the TCF label and consisted of previously released instrumentals including "Thaw Out" and "Don't Lose Your Cool".[14]

On 19 June 1968 the group Canned Heat were playing at the Music Hall in Houston and a friend of theirs mentioned that Collins was playing at the Ponderosa Club which they duly attended.[15] After Collins had finished playing they introduced themselves and offered to help secure an agent for him as well as an introduction to Imperial Records in California.[16] With the offer of a record deal and regular live work Collins made the decision to move; relocating at first to Kansas City in July 1968, where he played in the organ trio of keyboardist Lawrence Wright, and then in November to Palo Alto, California.[4] Collins chose Love Can Be Found Anywhere (Even In A Guitar) from the lyrics of Canned Heat's "Fried Hockey Boogie" as the title for his 1968 Imperial album in honor of Canned Heat and their lead-singer Bob Hite who had also provided the liner notes for the album.[4] In the spring of 1969 he was hired by Bob Krasnow to play on the Ike and Tina Turner album The Hunter which was released on Krasnow's Blue Thumb label.[17][18] The move to California was proving to be the right decision with Collins establishing himself as a regular act on the West Coast circuit playing at the Fillmore West and Whisky a Go Go[4] as well as the "Newport 69" festival in Northridge, California, in June 1969 and the Gold Rush Festival at Lake Amador, California, in October.[19][20] In December 1970 his debut album The Cool Sounds Of Albert Collins was reissued as Truckin With Albert Collins by Blue Thumb Records.[21]

In November 1971 the Denver label Tumbleweed, which had been newly created by Larry Ray and Bill Szymczyk, released the Collins album There's Gotta Be A Change; it was the labels first official release.[22][23] The single "Get Your Business Straight" b/w "Frog Jumpin" was released by Tumbleweed in February 1972.[24][25] In 1973 Tumbleweed closed due to financial problems leaving Collins without a record label.[26] He was signed by Bruce Iglauer, owner of Alligator Records, in 1978 on the recommendation of Dick Shurman whom Collins had met in Seattle.[5] His first release for the label was Ice Pickin' (1978) which was recorded at Curtom Studios, Chicago, and produced by Iglauer, Shurman and Richard McLeese. On 2 February 1978 Collins appeared in concert with the Dutch band Barrelhouse which was his first live appearance outside of the United States. The concert was filmed for the Dutch TV show Tros Sesjun and was subsequently released on vinyl in 1979 by Munich Records as Albert Collins & Barrelhouse Live.[27] Collins won a W. C. Handy Award in the category Best Contemporary Blues Album in 1983 for his Alligator release Don't Lose Your Cool.[28]

On 13 July 1985 Collins performed with George Thorogood and the Destroyers at Live Aid appearing as guest soloist on "Madison Blues"; the US part of the charity concert was held at the JFK Stadium in Philadelphia and together with the simultaneously broadcast concerts from other countries was viewed by over 1.5 billion people.[29] In December 1986 Collins appeared in concert with Etta James and Joe Walsh at the Wiltern Theater, Los Angeles, which was subsequently released on video under the title Jazzvisions: Jump The Blues Away.[30][31] The backing musicians for the concert were Rick Rosas (bass), Michael Huey (drums), Ed Sanford (Hammond B3), Kip Noble (piano) and Josh Sklar (guitar). In 1986 Collins won a Grammy Award with Robert Cray and Johnny Copeland for their album Showdown!.[2] Collins had finished working on his seventh Alligator album Cold Snap by October 1986 which was released shortly afterwards to good reviews and received a Grammy nomination for Best Traditional Blues Recording of 1987.[32][33] Collins cited the album as personally important to him due to the involvement of organist Jimmy McGriff; an early musical idol whom Collins had played with in Kansas City, Missouri, in 1966.[4] On 12 February 1987 he appeared as a musical guest on the NBC talk show Late Night with David Letterman.[34] Collins made a cameo appearance in the 1987 comedy film Adventures in Babysitting.[35] In 1987 the American composer John Zorn and Albert Collins collaborated on a suite entitled "Two-Lane Highway" which was subsequently released on the Zorn album Spillane. On 22 April 1988 Collins appeared at the New Orleans Jazz & Heritage Festival in a group that consisted of B.B. King, Eric Clapton and Stevie Ray Vaughan; the group played on the Riverboat President as it journeyed along the Mississippi River in recognition of the musical heritage of New Orleans and artists such as Fate Marable, Louis Armstrong and Henry Red Allen who had entertained passengers on the fleet of riverboats owned by the Streckfus Brothers.[36][37][38]

Collins was signed to Pointblank Records, a subsidiary of Virgin Records, in 1991.[39] Bruce Iglauer of Alligator Records expressed his disappointment at the departure of Collins while acknowledging that he had signed Collins on a "record to record" basis.[40] On 15 November 1991 Collins performed with Robert Cray, Steve Cropper and Dave Edmunds at the Guitar Legends event in Seville; a series of five concerts to promote the upcoming Seville Expo '92.[41] On 28 October 1991 Collins was filmed in concert for the music show Austin City Limits which was broadcast on 21 February 1992; the concert was released on DVD in April 2008 as Albert Collins Live From Austin, TX.[42] In 1993 Collins played at the Pointblank Borderline Blues Festival in London which ran from the 17 March to the 27 March; this would be his last appearance in the UK.[35] Collins was performing at the Paléo Festival in Nyon, Switzerland, in July 1993 when he was taken ill.[43] He was diagnosed in mid August with lung cancer which had metastasized to his liver, with an expected survival time of four months. Tracks from his last album Live '92/'93 were recorded at shows that September. Albert Collins died on 24 November 1993 at the age of 61. He was interred at Davis Memorial Park, Las Vegas, Nevada.[44][45] There was a posthumous nomination for his final album Live '92/'93 at the 38th Grammy Awards of 1996 in the category of Best Blues Contemporary Album.[46]

After a three-month battle with cancer, Albert Collins died at his Las Vegas, Nevada home on November 24, 1993. He was 61. Surviving him were his wife, Gwendolyn, and his father, Andy Thomas.[47]

Albert Collins was an inspiration to a generation of Texas guitar players including Stevie Ray Vaughan and Jimmie Vaughan. He was amongst a small group of Texas blues players, along with Johnny "Guitar" Watson and Johnny Copeland, who together shaped the legacy of T-Bone Walker into a modern blues template that was to have a major influence on many later players. From an interview with Robert Cray in Guitar World magazine:

...it was seeing Albert Collins at a rock festival in 1969 that really turned his head around. Two years later, Collins played at Cray's high school graduation party in Tacoma, Washington, and the ice-pick sound really sunk in deep. "That was it, Cray recalls. "That changed my whole life around. From that moment I started seriously studying the blues."[48]

Collins is remembered for his informal and audience-engaging live performances. He would frequently leave the stage whilst still playing to mingle with the audience.[49] The use of an extended guitar lead allowed Collins to go outside of clubs to the sidewalk with one anecdote stating that he left a club with the audience in tow to visit the store next door to buy a candy bar without once stopping his act.[50]

He is also remembered for his humorous stage presence which is recounted in the documentary Antones: Austin's Home of the Blues: Collins was playing a lengthy solo one night at Antone's and left the building whilst still playing. Collins returned to the stage still playing the solo and resumed entertaining the audience in person. Shortly afterwards a man arrived at the club and gave Collins the pizza which he had just ordered.[51]

This article uses material from the article Albert Collins from the free encyclopedia Wikipedia and it is licensed under the GNU Free Documentation License.

Franz Schmidt Intermezzo aus der Oper "Notre Dame"
Update Required To play the media you will need to either update your browser to a recent version or update your Flash plugin.