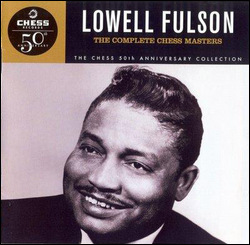 Lowell Fulson (March 31, 1921 – March 7, 1999)[1] was an American blues guitarist and songwriter, in the West Coast blues tradition. He also recorded for contractual reasons as Lowell Fullsom and Lowell Fulsom. After T-Bone Walker, he was the most important figure in West Coast blues in the 1940s and 1950s.[2]

Fulson was born on a Choctaw reservation in Atoka, Oklahoma, the son of Mamie and Martin Fulson. He stated that he was of Cherokee ancestry through his father, but he also claimed Choctaw ancestry. His father was killed when Lowell was a child, and a few years later he moved with his mother and brothers to live in Clarita and attended school at Coalgate.[3]

At the age of eighteen, he moved to Ada, Oklahoma, and joined Alger "Texas" Alexander for a few months in 1940,[1] but later moved to California, where he formed a band which soon included a young Ray Charles and the tenor saxophone player Stanley Turrentine. He recorded for Swing Time Records in the 1940s, Chess Records (on the Checker label) in the 1950s, Kent Records in the 1960s, and Rounder Records (Bullseye) in the 1970s.

His most memorable and influential recordings include "3 O'Clock Blues" (now a blues standard); "Every Day I Have the Blues", written by Memphis Slim; "Lonesome Christmas"; "Reconsider Baby", recorded by Elvis Presley in 1960, by Eric Clapton in 1994 for his album From the Cradle, and by Joe Bonamassa; and "Tramp", co-written with Jimmy McCracklin and later covered by Otis Redding with Carla Thomas, ZZ Top (for the 2003 album Mescalero), Alex Chilton, and Tav Falco.

"Reconsider Baby" came from a long-term contract agreed with Chess Records in 1954. It was recorded in Dallas under the supervision of Stan Lewis with a saxophone section that included David "Fathead" Newman on tenor and Leroy Cooper on baritone.[1]

Fulson stayed with the Checker label into 1962, when he moved to Kent Records, based in Los Angeles. His 1965 song "Black Nights" was his first hit in a decade, and "Tramp" did even better, restoring him to R&B stardom.[1]

A show entitled "California Blues: Swingtime Tribute" opened In 1993 at the Paramount Theatre in Oakland, California, with Fulson, Johnny Otis, Charles Brown, Jay McShann, Jimmy Witherspoon, Jimmy McCracklin and Earl Brown.[4] Fulson's last recording was a duet of "Every Day I Have the Blues" with Jimmy Rogers on the latter's 1999 Atlantic Records release, The Jimmy Rogers All-Stars: Blues, Blues, Blues.

A resident of Los Angeles, Fulson died in Long Beach, California, in March 1999, at the age of 77. His companion, Tina Mayfield, stated that the causes of death were complications from kidney disease, diabetes, and congestive heart failure. He was the father of four and grandfather of thirteen.[5]

In the 2004 film Ray, a biopic of Ray Charles, Fulson was portrayed by the blues musician Chris Thomas King.

ZZ Top included a version of "Tramp" on their 2003 album Mescalero, citing Fulson's guitar prowess as an inspiration to recreate the song.

Redman's 1993 single "Time 4 Sum Aksion" contains a sample from Fulson's song "Tramp", as does "How I Could Just Kill a Man" from Cypress Hill.

The Beatles song "Why Don't We Do It in the Road?" as performed by Fulson was used on the soundtrack of the 2007 crime film American Gangster; he had covered the song on his 1970 album, In a Heavy Bag.[6]

Salt-N-Pepa recorded a contemporary version of "Tramp" in 1987, on their album Hot, Cool & Vicious.

A cover of Fulson's song "Sinner's Prayer" appeared on Eric Clapton's album From the Cradle (1994) and on Ray Charles's first album, Ray Charles (1957), and (with B.B. King and Billy Preston) on his final album, Genius Loves Company (2004). Harry Belafonte also recorded "Sinner's Prayer on his Belafonte Sings the Blues album.

This article uses material from the article Lowell Fulson from the free encyclopedia Wikipedia and it is licensed under the GNU Free Documentation License.