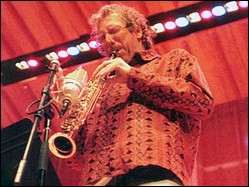 James Robert Belden (October 31, 1956 – May 20, 2015) was an American saxophonist, arranger, composer, bandleader, and producer.[1] As a composer he may be best known for his Grammy Award winning orchestral jazz recording, Black Dahlia (2001).[2] As producer he is mostly associated with the remastering of seminal recordings by trumpeter Miles Davis for Columbia Records.

Belden was born in Evanston, Illinois, but grew up in the Charleston, South Carolina suburb of Goose Creek. He briefly attended the University of South Carolina where he met composer Jay Knowles who introduced him to the music of Gil Evans. He then studied saxophone and composition at the University of North Texas before joining the Woody Herman band.

He recorded his first album Treasure Island in 1990. This was followed by a series of adventurous albums featuring jazz-tinged arrangements of contemporary pop songs culminating with Black Dahlia in 2001.

In 2008, he arranged and produced Miles from India, a world fusion music recording based on the compositions of Miles Davis for which he assembled a group made up of Davis alumni and musicians from India.[3] In addition to his work as arranger, composer, conductor and A & R director, Belden contributed numerous liner notes for noted recordings, such as "Lou's Blues" by Lou Marini and the Magic City Jazz Orchestra.

Some of his work as the author of numerous liner notes has received Grammy Awards.[4][5] In early 2015 Belden became the first American musician in 35 years to bring a band from the USA to perform in Iran.[6]

This article uses material from the article Bob Belden from the free encyclopedia Wikipedia and it is licensed under the GNU Free Documentation License.