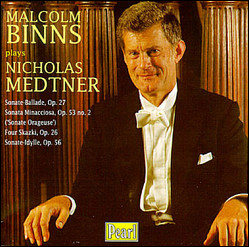 His recordings include the first complete recording of the Beethoven sonatas on original instruments, concertos by Balakirev and Rimsky-Korsakov, the Transcendental Studies of Lyapunov, works by Hummel and Medtner, as well as works from the standard repertoire by Bartók, Brahms, Chopin, Falla, Franck, Gershwin, Grieg, Liszt, Mozart, Poulenc, Rachmaninoff, Ravel and Schumann.[3][4]

He celebrated his 60th birthday with an all-Chopin recital which included the complete studies from Opp. 10 and 25.[5]

This article uses material from the article Malcolm Binns from the free encyclopedia Wikipedia and it is licensed under the GNU Free Documentation License.