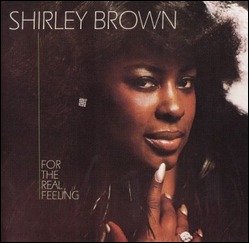 Shirley Brown (born January 6, 1947, West Memphis, Arkansas) is an American soul singer, best known for her million-selling single "Woman to Woman" which was nominated for a Grammy Award in 1975.

Brown was born in West Memphis, but was raised in Madison, Illinois, where she started singing in church when she was nine years old. Early experience singing gospel gave her a powerful but expressive voice likened to Aretha Franklin.[1] Albert King discovered her at age 14, singing in the Harlem Club in Brooklyn, Illinois. Young Shirley went on the road with King for nine years. While King made sure she had a tutor, Brown often cut her classes to work with the band.[1][2][3]

By 1972, Shirley was living in East St. Louis, Illinois, where she made her first record for the Abet label called, "I Ain't Gonna Tell" and "Love Built on a Strong Foundation".[3][4] Bandleader Oliver Sain produced the record; Sain worked with King on his first hit record ten years earlier.[1] By 1974, King recommended Brown to Stax Records in Memphis, Tennessee, where he had been one of the label's stars for some time.[1]

A successful debut album, Woman to Woman, was released by Stax on their Truth label,[7] but by 1975, the company was struggling financially and also facing litigation. A follow-up single, "It Ain't No Fun" was only a moderate success, and Stax closed soon afterwards.[5][8]

Her signing to Arista Records in 1977 resulted in the album Shirley Brown, produced by the former Stax owner Jim Stewart and writer-producer Bettye Crutcher, who provided most of the songs. These included "Blessed Is The Woman" which reached #14 R&B (#102 pop).[5][9][10]

Brown continued to record for several labels since then, including Fantasy, on the re-formed Stax label, and Sound Town.[10] She has been with the Mississippi based blues and soul label, Malaco Records since 1989.[11] She remains a popular live performer, mainly in southern states of the US, without having found the recording success of her earlier years.[5][12]

This article uses material from the article Shirley Brown from the free encyclopedia Wikipedia and it is licensed under the GNU Free Documentation License.