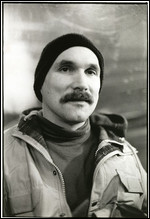 Raised in Colorado, Ostertag studied at the Oberlin Conservatory of Music. In 1976, he formed the improvisation ensemble Fall Mountain with Ned Rothenberg on reeds and Jim Katzin on violin, himself on electronic keyboard. The ensemble released Early Fall in 1979.

Later that same year, Ostertag relocated to New York City, where he befriended John Zorn, Fred Frith, Zeena Parkins, and several other musicians interested in collaborative improvisation. In 1980, Ostertag released Getting a Head with guitarist Fred Frith and drummer Charles Noyes. Ostertag's use of sampling, tape manipulation, and electronic custom-made instruments created a unique sound and approach to improvised music. Following the release of Getting a Head, Ostertag became the first of his generation of musicians to have his work presented at The Kitchen, at the time New York City's premiere venue for new music.

With his sudden success came a greater involvement in politics, specifically in the turbulent revolutions and counter-revolutions of South America in the 1980s. In response to the political climate, Ostertag released Voice of America. As Ostertag became increasingly involved in such political issues, and increasingly dissatisfied with the music industry, he moved to El Salvador in 1982 and, for the nearly seven years, abandoned music altogether. His experiences in El Salvador were later synthesized into his piece Sooner or Later.

Ostertag became an expert on the political crisis in Central America and published widely for a diverse range of publications, including Piensamiento Propio (Nicaragua) Piensamiento Critico (Puerto Rico), The Guardian (London), the Weekly Mail (South Africa), Mother Jones and the NACLA Report on the Americas (US), AMPO (Japan), and even the clandestine theoretical journal of the New People's Army in the Philippines. He alternates his time in Central America with organizing and public speaking in the US, giving lectures at Harvard, Yale, Princeton, Rutgers, and many other schools and institutions.

Ostertag returned to music in 1989 and toured with Fred Frith's Keep the Dog. He also appeared in Nicolas Humbert and Werner Penzel's 1990 documentary film on Frith, Step Across the Border. Ostertag released Attention Span in 1990, featuring Frith on guitars and John Zorn on saxophone. Ostertag followed Attention Span with the release of Sooner or Later, his musical response to his years in El Salvador and the first part of a trilogy to treat the themes of grief, anger, and joy. In 1992, The Kronos Quartet commissioned a new work from Ostertag. This commission produced the landmark work All the Rage. Ostertag composed the piece using a recording of a riot for gay rights in San Francisco. Ostertag originally conceived All the Rage as a collaboration with writer/painter/photographer/film maker David Wojnarowicz, but David was ill with AIDS. When David died before the collaboration could take place, Ostertag made a second, solo piece from the riot recordings, Burns Like Fire, and dedicated it to Wojnarowicz. In 1993, Ostertag formed Say No More, a virtual quartet, with vocalist Phil Minton, drummer Joey Baron, bassist Mark Dresser, percussionist Gerry Hemingway. The group's music was actually composed by a computer and sampler from separate individual performances and then released as Say No More in 1993, the live - In Person in 1994, Verbatim in 1996 and Verbatim Flesh & Blood in 2000.

In 1999, after 10 years working with the same Ensoniq ASR-10 sampler, Ostertag switched to a laptop computer and began writing his own audio performance software through Max/MSP. This allows him use various controllers, including joysticks, game pads, and drawing tablets in his performances. This same year, Ostertag released Like A Melody, No Bitterness his first CD of solo improvisation. This CD is a tribute to his sampler that he spent the last decade mastering as an instrument. Ostertag has also scored multimedia pieces such as Spiral in 1996. In 2000, Ostertag began work with Pierre Hébert and Baltazar López on a full-scale multi-media and theater work, Between Science and Garbage, commissioned by Meet the Composer and the Yerba Buena Center for the Arts in San Francisco.

On March 25, 2006, Ostertag made all of his recordings to which he owns the rights available as digital downloads under a Creative Commons Attribution-NonCommercial 2.5 license.[1]

Bob Ostertag is currently Professor in the faculty of Technocultural Studies at UC Davis [1] (short video from his and Jon Rose's work with students is available here: [2]).

Performing the works of other composers

This article uses material from the article Bob Ostertag from the free encyclopedia Wikipedia and it is licensed under the GNU Free Documentation License.