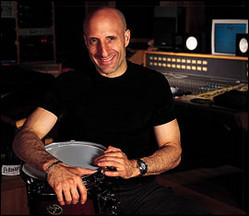 After graduating from Indiana University, in 1976, where he studied under the acclaimed tympanist George Gaber, Aronoff passed on several symphony orchestra offers and decided to head for the East Coast where he studied drum set in Boston and New York. During this time he began to concentrate on jazz and fusion music, and in 1977 he returned to Bloomington, Indiana and spent several years in a popular local band, playing throughout the Midwest.

In 1980 he joined John Mellencamp's band, recording 10 albums and touring with him over a 17-year period.

Aronoff also has been, and remains, an in-demand "sideman", touring with the likes of Richard Thompson (filling in for Dave Mattacks on the second half of Thompson's 1989 tour, after Mattacks broke his arm), as well as on one tour with alternative rock group The Smashing Pumpkins.

In 2005, Aronoff began touring again with roots rock band The BoDeans. He has appeared on their two-CD live set, Homebrewed: Live From the Pabst. Recently, Aronoff had the position of drummer on Avril Lavigne's new CD, The Best Damn Thing. He starred in the track "Everything Back But You".

Aronoff is one of four rotating drummers in Daryl Hall's house band for his Live From Daryl's House webcast.

As of July 26 2011, Arnoff is to jam with members of Chickenfoot and is confirmed to tour with the band promoting their second album, temporarily filling in with Chad Smith who is unable to participate in the tour due to commitments with his main band Red Hot Chili Peppers.[2]

This article uses material from the article Kenny Aronoff from the free encyclopedia Wikipedia and it is licensed under the GNU Free Documentation License.