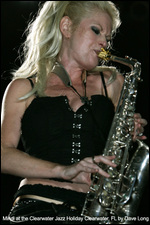 Mindi Abair is an American two time Grammy Award nominated[1] saxophonist, vocalist, author, and National Trustee for the National Academy of Recording Arts and Sciences, the organization that puts on the Grammy Awards show.

Her solo career has produced ten No. 1 radio singles, two No. 1 Billboard Jazz CDs, and four more solo CDs that have landed No. 5 and above on the Billboard Contemporary Jazz Charts. She was the featured saxophonist for the 2011 and 2012 seasons of American Idol, performed with the rock band Aerosmith,[2] for their 2012 Summer Tour, joined Bruce Springsteen and Max Weinberg for a night at the Beacon Theater and has played with Paul Shaffer and the CBS Orchestra three times on Late Show with David Letterman.

Mindi Abair was born in St. Petersburg, Florida. Her father Lance Abair played saxophone and keyboards, and her grandmother Virginia Rice was an opera singer, and piano and vocal instructor. Mindi started playing the piano at age five, and started playing alto saxophone at age eight, when her elementary school band instructor laid out instruments on the first day of band class and instructed each student to pick the instrument they most wanted to play. Mindi spent much of her early life on the road with her father's band, The Entertainers.

She acted as drum major of her high school marching band in her junior and senior years at Northside Christian School in St. Petersburg. As a senior in high school, she won the first chair alto saxophone for the Florida All-State Jazz Band. Abair spent her first year of college on a full scholarship at the University of North Florida, a jazz program started by Rich Matteson. She transferred to Berklee College of Music in Boston, Massachusetts, attending on a scholarship and studying saxophone with Joe Viola and George Garzone. Abair graduated magna cum laude in 1991 with a degree in Woodwind Performance. She formed her first band in college.[3]

In 1991, after college, Abair moved to Los Angeles, California, where she began booking her band into clubs, coffee shops and hotels. She played solo on the street at 3rd Street Promenade in Santa Monica, California and garnered the attention of jazz keyboardist Bobby Lyle, who hired her to record on his Power of Touch CD and tour with him. Her touring opportunities expanded over the next decade, as she toured as a saxophonist/singer and keyboardist with Adam Sandler, John Tesh, Jonathan Butler, Teena Marie, Rick Braun as well. Abair was featured on saxophone in the Go West video "Tell Me". And in 1996, she appeared on Adam Sandler's HBO Special and recorded on his platinum CD What's Your Name? playing the saxophone solo on "The Lonesome Kicker" and singing on various tracks.

When not touring, Abair released her first complete solo album, Always and Never the Same, an all vocal pop record, independently.[4] Abair performed in local Los Angeles rock clubs to promote the record, in addition to her touring with the Backstreet Boys.

In 2003, Abair signed to Verve Records and released the album It Just Happens That Way, which peaked at No. 7 on the Billboard Contemporary Jazz Chart[5] and remained in the Top 10 for 19 consecutive weeks. Billboard named the album one of the top 10 Contemporary Jazz CDs of the year. Her hit single "Lucy's" was No. 1 on R&R for a record-breaking eight weeks.

In 2013, Abair collaborated with Dave Koz, Richard Elliot, and Gerald Albright on the album Summer Horns. It was nominated for a Grammy Award.

On May 27, 2014, Abair released[10] "Wild Heart" on Concord Records imprint, Heads Up International. The record debuted at No. 1 on the Billboard Jazz chart and No. 152 on the Billboard Top 200.[11] The record, which included collaborations with the late Gregg Allman, Joe Perry and Trombone Shorty, was nominated for Best Contemporary Instrumental Album in the 2015 Grammy Awards.[1]

Abair received the Mad Skills Award at the third annual She Rocks at NAMM Show (organized by NAMM, the National Association of Music Merchants) on January 24, 2015.[12] Held in Anaheim, California, the event was founded by the Women's International Music Network.[12]

In 2015, after working with Randy Jacobs (founder of The Boneshakers) on the tour for "Wild Heart," he and Abair decided to form Mindi Abair and The Boneshakers, which includes Mindi Abair (Saxophone, Vocals), Randy Jacobs (Guitar, Vocals), Sweet Pea Atkinson (Vocals), Rodney Lee (Keys), Derek Frank (Bass, Vocals), and Third Richardson (Drums, Vocals).[13] In late 2015, they released a live album Mindi Abair and The Boneshakers Live in Seattle via Pledge Music and HeadsUp, which featured a performance from Seattle's Dimitriou's Jazz Alley in February 2015. In summer 2017, the group announced their first studio project via lead guitarist Randy Jacobs' website - Recorded over five days at EastWest Studios with producer Kevin Shirley,The EastWest Sessions, which includes 11 gritty blues and rock tracks, was released September 15, 2017. Blues guitarist Joe Bonamassa and Grammy winner Fantastic Negrito are featured guests.[14]. The album debuted at No. 3 on Billboard magazine's Blues Album Sales Chart the week of October 7, 2017.[15]

"Pretty Good for a Girl," a tongue-in-cheek track co-written by Abair and Jacobs for the album, inspired Abair to launch the web platform PrettyGoodForAGirl.net. The goal of the website is to celebrate exceptional women and turn "pretty good for a girl" into a phrase of empowerment.[16]

In 2007, Abair took over the nationally syndicated radio program Chill with Chris Botti which he had hosted for two years. The name changed to "Chill With Mindi Abair," which she hosted from 2007 to 2015. The focus of the program was chill out music.[17]

Abair featured on the 2011 American Idol season as a soloist with Paul McDonald and Casey Abrams and playing behind contestants Jacob Lusk and Haley Reinhart. Steven Tyler remarked to McDonald after her debut on the show "Forget you, who's your sax player?"[18] Abair was featured on the 2012 American Idol season, performing with Phillip Phillips. Abair appeared with Phillips six times as a featured saxophonist, performing the songs "U Got It Bad" originally by Usher, "Disease" originally by Matchbox Twenty, "Have You Ever Seen the Rain?" originally by Creedence Clearwater Revival, "Movin' Out" originally by Billy Joel, "In The Midnight Hour" originally by Wilson Pickett and "Give A Little More" originally by Maroon 5. Tyler was so impressed with Abair that he invited her to join Aerosmith on the summer leg of their 2012 world tour playing sax and singing backing vocals.[18] Abair performed a duet with Joey Kramer during his drum solo.

She filled in as the saxophonist with the CBS Orchestra on the Late Show with David Letterman on April 3 and 4, 2012.[19] She sat in with the band again on July 29, 2014, and she also performed her original songs "Wild Heart" and "Train."

Abair has also appeared on The Tavis Smiley Show and more than once on The Tonight Show Starring Jimmy Fallon.[20]

In 2011, Abair self-published her first book, How To Play Madison Square Garden, a guide to stage performance. She collaborated on it with her father Lance Abair and Ross Cooper. It was released on Amazon.com as both a Kindle electronic format and in paperback, and has a 5 star rating. John Taylor of Duran Duran (and veteran of Madison Square Garden) said of the book: "For the next generation of wanna-be arena-fillers, there is now an alternative to spending years on the road, playing empty dives, and pimping out the bass player to get radio play. Mindi Abair's book gives away every professional secret of how to make it to Madison Square Garden. And how to get an encore!"[21]

In 2009, Abair was elected as a Governor on the Board of the Los Angeles Chapter of the National Academy of Recording Arts and Sciences, serving for three years until 2012, when she was elected as Secretary. She spent one year serving as Secretary. In 2013, Abair was elected to a two-year term as the President of the Los Angeles Chapter, taking over the position from the previous president, MC Lyte. Mindi was elected to a 2-year term as National Trustee of the Recording Academy in 2015.

This article uses material from the article Mindi Abair from the free encyclopedia Wikipedia and it is licensed under the GNU Free Documentation License.