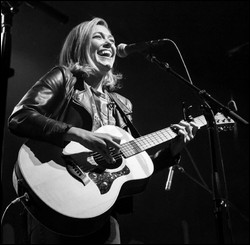 Rachel Ashley Platten[1] (born May 20, 1981) is an American singer and songwriter. She released three independent albums between 2003 and 2014, before signing with Columbia Records in early 2015.

She rose to fame in 2015 with the release of the single "Fight Song", which peaked at number six on the US Billboard Hot 100, topped the charts in the United Kingdom and peaked within the top ten of multiple charts worldwide. Platten won an Emmy Award for the live performance of the song on Good Morning America. Her major-label debut album, Wildfire, released in 2016, was certified gold by the Recording Industry Association of America and also featured "Stand by You" and "Better Place".

Platten was born on May 20, 1981, in New York City to a mother of Irish ancestry, and grew up in Newton Centre, Massachusetts and attended the Mason-Rice Elementary School.[2] She was raised Jewish.[3][4] Platten studied classical piano from the age of 5 and then took up guitar in high school. She attended Buckingham Browne and Nichols high school, where she sang in the school's singing group. At Trinity College, she was a member of the Trinity College Trinitones, the college's first all-female a cappella group.

As a part of a study abroad program, she went to Trinidad to do an internship at a diplomat's office and at a record label. While she was there, she sang backup for a friend's band in front of over 80,000 people at the International Soca Monarch finals in 2002. According to Platten, from that moment on she knew she had to pursue music full-time.[5]

Platten graduated from Trinity College with a degree in international relations in 2003. She then moved to New York City's Greenwich Village performing with Prince and Sly and the Family Stone cover band called Dayz of Wild. She performed her solo music around the Village and eventually began touring the country.

She has worked with numerous charities, Musicians on Call (where she sings bedside to hospital patients) for 11 years and she is an ambassador for Music Unites. She also works with the Ryan Seacrest Foundation and was an ambassador for Live Below the Line, a call to end world poverty.

Platten released her debut studio album Trust in Me in 2003, which she has called "a collection of demos".[6] Her second album, Be Here, was released from Rock Ridge Music in 2011.[7] Her 2011 single "1,000 Ships" peaked at number 24 on the US Billboard Adult Top 40 chart, also playing at various radio stations.[8] An earlier song, "Seven Weeks", was used for the film The Good Guy.[9] The theme song for ABC Family's Jane by Design, "Work of Art" was performed by Platten on hire.[10] Her song "Begin Again" was used in the hit ABC Family TV show Pretty Little Liars 100th episode "Miss Me x 100".[11] Her song "Don't Care What Time It Is" was used in VH1's Basketball Wives. Her song "You're Safe" was used in MTV's Finding Carter in September 2014. On June 27, 2014, Platten debuted "Fight Song" on the music social network We Heart It as part of an artist spotlight.[12]

In the spring of 2015, Platten released "Fight Song" from Wildfire. The song has been used in various media, as well as serving the official anthem for the 2016 Democratic presidential nominee Hillary Clinton. It reached number six on the US Billboard Hot 100, number two on the Australian Singles Chart, number six in Ireland, number eight in New Zealand, number nine on the Billboard Canadian Hot 100 and number one on the UK Singles Chart.[13] It has double platinum sales in the US. Platten's 2015 Fight Song EP reached number 20 on the Billboard 200.

Platten served as a support act on Alex & Sierra and Andy Grammer's "The Good Guys & A Girl Tour" in early 2015.[14] She then toured with Colbie Caillat and Christina Perri on their "Girls Night Out, Boys Can Come Too Tour" throughout the summer of 2015.[15]

After the Orlando nightclub massacre, Platten announced that proceeds from the new acoustic version of her “Fight Song” will benefit the National Compassion Fund, working to support the needs of people impacted by the event.[18]

In October 2016, Platten sang The Star Spangled Banner prior to Game 1 of the 2016 World Series between the Cleveland Indians and Chicago Cubs.[19]

On New Year's Eve 2016, Platten co-headlined the Times Square Ball festivities in New York City's Times Square alongside Gavin DeGraw, where she performed "Fight Song", "Stand by You", "Beating Me Up", and John Lennon's "Imagine".[20]

In 2017, Platten served as an opening act for two Los Angeles shows and one Las Vegas show on Faith Hill and Tim McGraw’s Soul2Soul: The World Tour.[21]

This article uses material from the article Rachel Platten from the free encyclopedia Wikipedia and it is licensed under the GNU Free Documentation License.