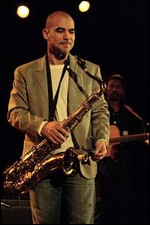 His mother is the Guadeloupean novelist Simone Schwarz-Bart, author of The Bridge of Beyond. His father was French-Jewish author André Schwarz-Bart. The family traveled widely, living in Senegal, Switzerland, and Goyave, Guadeloupe. Jacques Schwarz-Bart was dubbed "Brother Jacques" and his music has incorporated rhythm and blues as well as hip hop influences.[1]

Schwarz-Bart's first instrument was the Gwo ka drum which he learned to play as a child, coached by Anzala (one of the top percussionists on Guadeloupe).[2] He also learned the biguine style of music. At age six, while living in Switzerland, he discovered jazz music and taught himself guitar by playing along with jazz records.

Schwarz-Bart graduated from the School of Government called Sciences Po, and took a job as a Senator’s assistant in Paris. When he was 24, he began playing saxophone, and after three years, left his position in government, and attended the Berklee School of Music, in Boston, Massachusetts.[3]

After graduation, Schwarz-Bart developed a reputation by playing with acknowledged leaders of the Boston jazz scene such as Danilo Perez, Bob Moses, and Giovanni Hidalgo before leaving for New York City. He played in Roy Hargrove's Latin jazz band, Crisol, replacing David Sanchez. By early 2000, he had earned his nickname, "Brother Jacques," given to him by musician D'Angelo, in praise of Schwarz-Bart's musicianship. In addition to his work with Hargrove and D'Angelo, Schwarz-Bart did session work, and performed live with, Erykah Badu, Eric Benet, Meshell N’degeocello, James Hurt, Danilo Perez, Ari Hoenig and David Gilmore. His tune, "Forget Regret", was a single on Hargrove’s 2003 album "Hard Groove."

In 2005, Schwarz-Bart left Hargrove's band and began the Gwoka Jazz Project which included musicians such as Admiral T and Jacob Desvarieux of Kassav', and resulted in two albums with Universal, Soné Ka La and Abyss.[4] In 2010, he released Rise Above which is a collaboration with singer Stephanie McKay, who is also his wife.[5]

This article uses material from the article Jacques Schwarz-Bart from the free encyclopedia Wikipedia and it is licensed under the GNU Free Documentation License.

Johann Simon Mayr Ouvertüre zu "Sisara"
Update Required To play the media you will need to either update your browser to a recent version or update your Flash plugin.