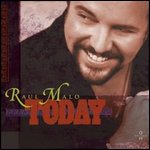 Raúl Francisco Martínez-Malo Jr. (born August 7, 1965, Miami, Florida), known professionally as Raúl Malo, is an American singer, songwriter, guitarist and record producer. He is the lead singer of country music band The Mavericks and the co-writer of many of their singles, as well as Rick Trevino's 2003 single "In My Dreams". After the disbanding of The Mavericks in the early 2000s, Malo pursued a solo career.[1] He has also participated from 2001 in the Los Super Seven supergroup. The Mavericks re-formed in 2012 and did a five-week tour.

Malo was born in Miami to middle-class Cuban parents. He is married to Betty and together they have three sons: Dino, Vincent and Max (who sang with him on Marshmallow World & Other Holiday Favorites).

The Mavericks, with Malo, original drummer Paul Deakin, and bass guitarist Robert Reynolds, reunited in 2012-2013 for tours and a new album. Eddie Perez will be the guitarist. He joined the group for the Live in Austin DVD.

On July 29, 2012, Malo sang The National Anthem at the Brickyard 400 NASCAR race in Indianapolis, IN.

This article uses material from the article Raul Malo from the free encyclopedia Wikipedia and it is licensed under the GNU Free Documentation License.