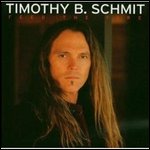 Timothy Bruce Schmit (born October 30, 1947) is an American musician, singer, and songwriter. He has performed as the bassist and vocalist for Poco and the Eagles, having replaced bassist and vocalist Randy Meisner in both cases. Schmit has also worked for decades as a session musician and solo artist. In 1998, he was inducted into the Rock and Roll Hall of Fame as a member of the Eagles.

Schmit was born in Oakland, California.[1] He was raised in Sacramento, and began playing in the folk music group Tim, Tom & Ron[1] at the age of 15. That group evolved into a surf band called the Contenders, then changed its name to the New Breed (sometimes known simply as "the Breed"). As the New Breed, they had one big radio hit: the Animals-inspired "Green Eyed Woman," which was released in 1965. Changing its name once again to Glad, the group recorded the album Feelin' Glad in 1968.

In 1968, Schmit auditioned for Poco but was turned down in favor of founding member Randy Meisner. When Meisner quit the band in 1970, Schmit replaced him on bass and vocals.[2] He wrote and was the lead singer on the song "Keep on Tryin'," Poco's biggest hit single to that point, peaking at #50 on the Billboard Hot 100 in 1975. Apart from Poco, Schmit also contributed vocals to Firefall's 1977 hit, "Just Remember I Love You."[3]

Tenure with the Eagles

In 1977, Schmit joined the Eagles after the Hotel California tour, once again replacing Randy Meisner on bass/vocals after Meisner quit. Although the Eagles are thought of as a quintessential California band, Schmit is the only member of the group to actually be a native of California.[11][12]

On the 1979 album, The Long Run, Schmit co-wrote and sang lead vocals on the song "I Can't Tell You Why". The band later broke up in 1980 and reunited 14 years later in 1994, with Schmit singing the lead vocals on "Love Will Keep Us Alive", on the reunion album Hell Freezes Over.

In 2007, the Eagles released a new album, Long Road Out of Eden. Schmit continued to be part of the Eagles lineup along with Don Henley, Glenn Frey and Joe Walsh until Frey's death in 2016.

Career after the Eagles

After the Eagles broke up in 1980, Schmit embarked on a solo career, singing vocals and playing bass for hire during studio sessions. His voice can be heard on many hits, including Bob Seger's "Fire Lake" and Boz Scaggs' "Look What You've Done to Me" (each with Frey and Henley), Don Felder's "Heavy Metal (Takin' a Ride)" (with Henley), and Crosby, Stills and Nash's "Southern Cross", where he sang harmony. He was also a background musician on two of Don Henley's hit songs, "Dirty Laundry" and "You Don't Know Me at All".

Schmit teamed with his predecessor in both Poco and the Eagles, Randy Meisner, along with their mutual Eagles bandmate Joe Walsh, to provide background vocals to the Richard Marx 1987 hit "Don't Mean Nothing". Schmit also performed on the Toto 1983 hit singles "I Won't Hold You Back" and "Africa", and the Jars of Clay song "Everything in Between". He also played on the 1983 Glenn Shorrock solo album. In 1991 Schmit covered the standard "I Only Have Eyes for You" for the soundtrack of the film Don't Tell Mom the Babysitter's Dead. In 1988 he added background vocals to Sheena Easton's album The Lover in Me and in 1989 Schmit added background vocals on the Stacey Q single, "Heartbeat", which was featured on her critically acclaimed Nights Like This album.

Schmit toured with Toto in 1982 and with Jimmy Buffett, in 1983, 1984, and 1985 as a member of the Coral Reefer Band, and coined the term "Parrotheads" to describe Buffett's fans. He was a member of Ringo Starr & His All-Starr Band in 1992. In 1993, he contributed background vocals to several tracks on Clint Black's No Time to Kill CD including the title cut. In 1996, he sang on a cover version of The Beach Boys' 1966 song "Caroline, No" on their album Stars and Stripes Vol. 1, with the Beach Boys themselves contributing harmonies. In 2000, he toured with Dan Fogelberg which became a live album, "Dan Fogelberg Live." Schmit sang harmony on the title track of Katy Rose's debut album, Because I Can, produced by fellow Poco alumnus and Katy's father, Kim Bullard.

In May 2012, Schmit was awarded an Honorary Doctorate of Music from Berklee College of Music.[13]

His latest album, Leap of Faith, was released on September 23, 2016, the first release of an Eagles member since the death of bandmate Glenn Frey in January 2016.

Schmit has three children: a daughter by his first wife and a daughter and son by his present wife.[14]

This article uses material from the article Timothy B. Schmit from the free encyclopedia Wikipedia and it is licensed under the GNU Free Documentation License.