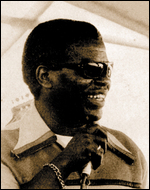 Chris Kenner (December 25, 1929 January 25, 1976) was a New Orleans R&B singer and songwriter, best known for two hit singles in the early 1960s that became staples in the repertoires of many other musicians.

Born in the farming community of Kenner, Louisiana, upriver from New Orleans, Kenner sang gospel music with his church choir, and moved to New Orleans in his teens. In 1955 he made his first recordings, for a small label, Baton Records, without success; and in 1957 recorded his "Sick and Tired" for the Imperial Records label; Fats Domino covered it the next year and the song became a hit. "Rocket to the Moon" and "Life Is Just a Struggle," both cut for the Ron Records label, were other notable songs from this period.

Moving to another New Orleans label, Instant, he began to work with pianist and arranger Allen Toussaint. In 1961, this collaboration produced "I Like It Like That", his first and biggest hit, peaking at #2 in the Billboard Hot 100 chart (covered in 1965 by The Dave Clark Five) and "Something You Got" (covered by Wilson Pickett, Alvin Robinson, the Ramsey Lewis Trio, Chuck Jackson, Earl Grant, Maxine Brown, Bobby Womack, Fairport Convention and Bruce Springsteen). "I Like It Like That" sold over one million copies, and was awarded a gold disc.[1] In 1962 he produced his most enduring song, "Land of a Thousand Dances," which was recorded by Cannibal & the Headhunters, Thee Midniters, Wilson Pickett, The Action and Patti Smith.

Kenner continued to record for Instant and for various other small local labels, including many of his lesser-known songs from the 1960s, such as "My Wife," "Packing Up" and "They Took My Money". He released an album on Atlantic Records in 1966; the Collectors' Choice label reissued the LP, Land of a Thousand Dances, on CD in 2007.

In 1968 Kenner was convicted of statutory rape of a minor, and spent three years in Louisiana's Angola prison.

This article uses material from the article Chris Kenner from the free encyclopedia Wikipedia and it is licensed under the GNU Free Documentation License.