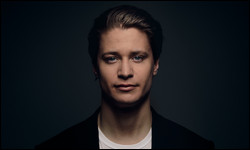 Kygo has since released several singles, such as "Stole the Show", "Here for You", "Stay", and "It Ain't Me", which have debuted on several international charts. Kygo's debut album Cloud Nine was released on 13 May 2016.[12] He made history on 21 August 2016 at the 2016 Rio Olympics, when he became the first house music producer to perform at an Olympics closing ceremony.[13] In March 2018, Billboard named Kygo as number three on their 2018 ranking of dance musicians titled Billboard Dance 100.[14][15]

Kygo was born 11 September 1991 as a non-native foreign in Singapore,[1][2] the son of Kjersti Gjerde, a dentist, and Lars Gørvell-Dahll, an abroad worker in the maritime industry.[16][17] He has an older stepbrother Mads, two older sisters Johanne and Jenny, and a younger half-brother Sondre.[1][17] Through his childhood, he lived and traveled with his family in Brazil, Japan, Kenya and Egypt.[1]

Kygo started getting piano lessons at the age of six.[18] He stopped when he was 15 or 16 and started producing music with Logic Studio and a MIDI keyboard while watching several tutorials on YouTube.[19] When he decided to pursue music full-time he was halfway through a degree in business and finance at Heriot-Watt University in Edinburgh, Scotland.[20] He has cited Swedish DJ Avicii as his main inspiration.[21]

On 15 May 2013, Kygo released his first single called "Epsilon" on Romanian record label Ensis Records.[22] After that, on 1 December 2014, he released the single "Firestone", featuring vocals from Conrad (mononym for Conrad Sewell), which gained international recognition and debuted on several charts worldwide. After receiving over 80 million views on YouTube and SoundCloud, Kygo was contacted by Avicii and by Chris Martin of Coldplay to create a remix of the song "Midnight".[23][24] He has also supported Avicii at Findings Festival in Oslo, Norway, in 2014.[23] On 19 September 2014, it was confirmed that Kygo was to replace Avicii at mainstage in TomorrowWorld, due to Avicii's health concerns.[25]

He was also featured in an interview for Billboard magazine, where he talked to writer Matt Medved about his remixes for Diplo and Coldplay, and talked about his upcoming tour in North America.[26] In July 2014, Kygo entered into a partnership with EDM lifestyle brand Electric Family to produce a collaboration bracelet for which 100% of the proceeds are donated to Médecins Sans Frontières.[27] In the same month, he signed a record label deal with Sony International and Ultra Music.[28]

In February 2015, Kygo's song "ID" was featured in the official trailer for Ultra Music Festival.[29] The same track is also featured on FIFA 16, a popular association football video game by EA Sports.[30] In August 2015, Kygo was a featured headliner at Lollapalooza in Chicago, one of the biggest music festivals in the world. He made his U.S. television debut on The Late Late Show with James Corden in October 2015.

In the beginning of March 2016, Kygo announced that his debut studio album was going to be released on 13 May 2016, under the title Cloud Nine. He also announced that he would be releasing three promotional singles, leading up to the release of the album. The first of these singles, which was released 18 March 2016, was entitled "Fragile", which features vocals and was collaborated with Labrinth. The second single came out on 1 April 2016, and was called "Raging", which features vocals from the Irish band Kodaline and was also co-written by James Bay. The third and last single was released on 22 April 2016 and was entitled "I'm In Love", featuring vocals from James Vincent McMorrow.

Kygo launched a new lifestyle brand called Kygo Life on 17 August 2016. The brand consists of two collections of high-fashion and relaxed wear, in addition to hardware such as headphones.[35][36] Kygo Life is at the moment only available in Europe, United States and Canada.[37][38]

He performed "Carry Me" with American singer and songwriter Julia Michaels at the closing ceremony of the 2016 Summer Olympics on 21 August at the Maracanã Stadium in Rio de Janeiro, as part of a segment that promoted the new Olympic Channel service launching after the Games.[39]

On 9 February 2017, Kygo posted a snippet of his collaboration with American singer and actress Selena Gomez.[40] They confirmed the single titled "It Ain't Me", via their social media accounts on 13 February 2017. It was released on 16 February 2017.[41] The song is the lead single from Kygo's first EP, Stargazing.

On 15 September 2017, Kygo remixed the U2 song "You're The Best Thing About Me", which was also released as his collaborative single with the band.[42]

On 19 October 2017, Kygo announced via Facebook that his second studio album is called Kids in Love, which was released on 3 November. On 20 October 2017, he released the lead single and title track "Kids in Love", which features The Night Game. Shortly after releasing the album, Kygo announced the Kids in Love Tour. On 16 March 2018, Kygo released "Remind Me to Forget", a track featuring American singer Miguel, as the third single from the album, following "Stranger Things".

In June 2018, Kygo announced a collaboration with American rock band Imagine Dragons titled "Born to Be Yours".[43]

Kygo is in a relationship with Maren Platou, who was publicly known since March 2016.[44] He is a fan of Manchester United.[45]

His artist name Kygo can be pronounced as (Norwegian pronunciation: [kyːɡuː])[46] for Norwegian speakers, and /ˈkaɪɡoʊ/[46] for English speakers. Both pronunciations can be used interchangeably. Kyrre got the idea for his stage name through a username he received in high school for the digital learning platform itslearning.[47] The service used parts of his name to create a nickname, thereof "Ky-" standing for the first two letters in his given name "Kyrre", and "-go" for the first two letters in his last name "Gørvell-Dahll". The letter ø is usually replaced with letter o in computing. In an interview with newspaper Fanaposten, Kyrre quoted; "Kygo [as an artist name] has been absolutely perfect. It is very easy to say, in both Norwegian and English. [And] I have no need to change the artist name [in the future]".[47]

In June 2016, NRK said that Kygo is "giving 50 000 USD [...] of the profits [of his sold-out festival on 20 August]" to Frank Mugisha; Kygo was quoted: "Everyone should be permitted to live with one's sexual orientation. That is not the situation in Uganda and quite a few other countries across the world".[48]

This article uses material from the article Kygo from the free encyclopedia Wikipedia and it is licensed under the GNU Free Documentation License.