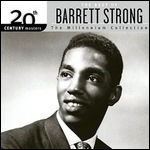 Barrett Strong (born February 5, 1941) is an American singer and songwriter. Strong was the first artist to record a hit for Motown, although he is best known for his work as a songwriter, particularly in association with producer Norman Whitfield.[1] Among his most famous work at Motown, Strong wrote the lyrics for many of the songs recorded by the Temptations.

He was born in West Point, Mississippi.[2]

Strong was among the first artists signed to Berry Gordy's fledging label, Tamla Records, and was the performer on the company's first hit, "Money (That's What I Want)", which reached No. 2 US R&B in 1960. The single was originally released on Tamla, Motown's first label, but was then leased to the Anna label as it was getting airplay, and it was on the Anna label that it was a hit. It sold over one million copies, and was awarded a gold disc by the RIAA.[3] "Money"[2] was later recorded by a number of acts, including the Beatles, the Rolling Stones, the Kingsmen, Richard Wylie and His Band, Jerry Lee Lewis, the Searchers, the Flying Lizards, the Sonics and Buddy Guy. Strong claims that he co-wrote "Money" with Gordy and Janie Bradford; his name appears on the song's original copyright registration with the United States Copyright Office. Gordy disputed these claims, stating that Strong's name was only included because of a clerical error.[4]

In the mid 1960s, Strong became a Motown writer lyricist, teaming with producer Norman Whitfield. Together, they wrote some of the most successful and critically acclaimed soul songs ever to be released by Motown, including "I Heard It Through the Grapevine" by both Marvin Gaye and Gladys Knight & the Pips; "War" by Edwin Starr; "Wherever I Lay My Hat (That's My Home)" by Paul Young; Smiling Faces Sometimes" by the Undisputed Truth; and the long line of "psychedelic soul" records by the Temptations, including "Cloud Nine", "I Can't Get Next to You", "Psychedelic Shack", "Ball of Confusion (That's What the World Is Today)", and "Papa Was a Rollin' Stone", amongst others. Strong received a Grammy Award for Best R&B Song in 1973 for "Papa Was a Rollin' Stone". Strong and Whitfield also co-wrote the ballad "Just My Imagination (Running Away With Me)", a 1971 Billboard No. 1 that also marked the last Temptations single to feature original members Eddie Kendricks and Paul Williams.

Strong has re-released his latest album, Stronghold II, which he wrote and composed in collaboration with rocker/songwriter Eliza Neals in 2008, in digital format only.[6]

In 2010, Strong appeared in "Misery", his first music video in his fifty years of recording music, co-produced by Eliza Neals and Martin "Tino" Gross with Strong at the helm.[7]

This article uses material from the article Barrett Strong from the free encyclopedia Wikipedia and it is licensed under the GNU Free Documentation License.

Ignacy Jan Paderewski Romanze aus Klavierkonzert a-moll op. 17
Update Required To play the media you will need to either update your browser to a recent version or update your Flash plugin.