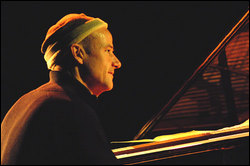 Jon Georg Balke (born 7 June 1955 at Furnes, (Ringsaker), Norway) is a Norwegian jazz pianist and composer currently known for his Magnetic North Orchestra. He is the younger brother of saxophonist Erik Balke.[1][2][3]

He began with classical piano, but switched to blues at 12, though today he performs within several genres. At the age of 18 he joined Arild Andersen's quartet. By the mid-1980s he worked on his own and would become one of Norway's leading jazz composers.[4] He was active in the groups of Radka Toneff and in the Afrofusion group E´olén before joining Oslo 13 and Masqualero in the early 1980s. From 1989 he focused on his own projects, such as JøKleBa (with Audun Kleive and Per Jørgensen) and the still existing Magnetic North Orchestra for which he composed the commissioned work Il Cenoneat to Vossajazz 1992.[5]

Balke formed the percussion group Batagraf in 2002, and created the concept work Siwan with singer Amina Alaoui in 2007. He is also the creator of a series of multimedia concerts at Vossajazz festival, labeled Ekstremjazz. The concerts involve various practitioners of extreme sports, such as parachuting, paragliding, hanggliding, and bmx biking.[1][4] In 2012 he was "Artist in residence" at Moldejazz.[6]

This article uses material from the article Jon Balke from the free encyclopedia Wikipedia and it is licensed under the GNU Free Documentation License.