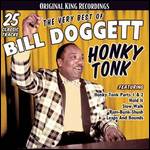 William Ballard Doggett (February 16, 1916 – November 13, 1996)[1] was an American jazz and rhythm and blues pianist and organist. He is best known for his compositions "Honky Tonk" and "Hippy Dippy", and variously working with the Ink Spots, Johnny Otis, Wynonie Harris, Ella Fitzgerald, and Louis Jordan.[1]

Doggett was born in Philadelphia.[1] His mother, a church pianist, introduced him to music when he was nine years old. By the time he was fifteen, he had joined a Philadelphia area combo, playing local theaters and clubs while attending high school.

Doggett later sold his band to Lucky Millinder, and worked during the 1930s and early 1940s for Millinder, Frank Fairfax and arranger Jimmy Mundy. In 1942 he was hired as the Ink Spots' pianist and arranger.

Toward the end of 1947, he replaced Wild Bill Davis as the pianist for Louis Jordan's Tympany Five. It was in Jordan's group that he first achieved success playing the Hammond organ. In 1950 he is reputed to have written one of Jordan's biggest hits, "Saturday Night Fish Fry", for which Jordan claimed the writing credit.

In 1951, Doggett organized his own trio and began recording for King Records. His best known recording is "Honky Tonk", a rhythm and blues hit of 1956 which sold four million copies (reaching No. 1 R&B and No. 2 Pop), and which he co-wrote with Billy Butler.[2] The track topped the US Billboard R&B chart for over two months.[3] He won the Cash Box award for best rhythm and blues performer in 1957, 1958, and 1959. He also arranged for many bandleaders and performers, including Louis Armstrong, Count Basie, Ella Fitzgerald, and Lionel Hampton.

He continued to play and arrange until he died, aged 80, of a heart attack in New York City.[1]

12" LPs issued by other labels

This article uses material from the article Bill Doggett from the free encyclopedia Wikipedia and it is licensed under the GNU Free Documentation License.

Frédéric Chopin Etude Ges-Dur op. 10 Nr. 5
Update Required To play the media you will need to either update your browser to a recent version or update your Flash plugin.