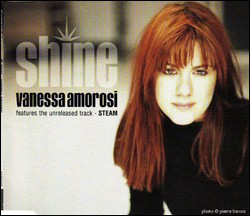 Vanessa Joy Amorosi[1] (born 8 August 1981)[2] is an Australian singer-songwriter and recording artist. Her combined album and single sales have reached over 2 million worldwide. In August 2012, Amorosi announced she was no longer signed to Universal Music.[3]

Amorosi was born in Melbourne, Victoria, in a Roman Catholic family of Italian origin, the daughter of singers Frank and Joy Amorosi.[1] When Amorosi was four, along with her younger sisters Mellissa and Natasha, she would go to tap, jazz and classical ballet classes, which were being run by her uncle. She attended Emerald Primary School and Emerald Secondary College.[4][5] At the age of 12, Amorosi started to perform in shopping centers and local council concerts under the supervision of her family. She also performed on Young Talent Time.[6] Amorosi was discovered performing at Matrioshka,[7] a Russian restaurant in Carnegie, by Jack Strom and signed a recording contract in 1997. After being signed to MarJac Productions (co-owned by managers Mark Holden and Jack Strom) and recording a promo CD titled "Get Here", she secured a deal with Transistor Music Australia.[8]

In 1999, Amorosi released her debut single "Have a Look" which became a Top 20 hit and went gold in Australia.[9] This was followed by her second single "Absolutely Everybody", an anthemic dance song, which reached the Top 10. It was certified double platinum and became the longest charting Australian single by an Australian female artist.[9][10] It remained in the ARIA Top 50 Singles Chart for over six months after its release.[11] "Absolutely Everybody" was released internationally and reached the Top 10 in many European countries including the UK and Germany where it received a gold certification. Amorosi performed at many large events such as the NRL Grand Final, the opening of the Motorcycle Grand Prix at Phillip Island and the new millennium on "New Year's Eve" at Darling Harbour.

Following the success of the first two singles Amorosi released two more singles in 2000 "Shine" and "The Power" became major Australian hits. Both were accredited gold by the ARIA Australian music industry. The rights to create a remixed version of "Shine" were purchased by the airline Ansett Australia, who used this version for a commercial.[12] Amorosi was one of many celebrities to appear in the commercial.

From 29 April to 25 May, Amorosi supported Savage Garden for 16 shows on the Australian leg of their Affirmation World Tour.[6]

Her album The Power reached number one on the Australian album charts. Amorosi received six ARIA nominations in the year 2000 awards[13] and The Power was nominated[14] for "Best Female Artist" and "Best Pop Release" in the ARIA Music Awards of 2001. Her largest audience came in September 2000 with performances at the opening and closing ceremonies of the 2000 Sydney Olympics and at the Paralympic Games. At the opening ceremony of the aforementioned Olympics she sang the Olympic song titled "Heroes Live Forever". Amorosi won the APRA Award in 2001 for "Most Played Song" on Australian Radio with "Shine",[15] and received international acclaim in Germany where she won "Best International Newcomer" at the 2001 VIVA Comet Awards.[16] Later that year she also made a special appearance at the Goodwill Games Opening and Closing ceremonies in Brisbane. In 2001, she performed at the AFL Grand Final.

In August 2002, Amorosi traveled to Manchester where she was one of the stars of the Commonwealth Games Hand-Over Ceremony, performing her single "Shine" and a new song written especially for the event, "I'll Always Be a Melbourne Girl".[17][18]

In February 2003, Amorosi performed her blues set for the first time at the Melbourne International Music and Blues Festival[19] and traveled to Germany to perform her latest European single "True To Yourself" on Top of the Pops and the hugely successful long-running show Wetten, dass..? which screens throughout Europe.[20]

On 25 January 2006, it was revealed that Amorosi signed with manager Ralph Carr, having completed her seven-year management with MarJac Productions.[21] She is quoted on the website as saying, "I have been with my previous management for seven years and thought both parties had gone as far as we could together... Moving over to Ralph Carr Management seemed like a natural progression, given the acts he has successfully managed. I am excited and enthused." On 22 November, it was announced that Amorosi had signed to Universal Music Australia.

Amorosi's involvement with Kids Help Line and the Variety Club led to a number of honours,[22] including a 2003 nomination for Australian of the Year. She still has the farm where endangered animals can find refuge, although she does not get to visit much; her friends run it for her. She supported Kiss on their 2008 tour of Australia.

In 2008, Amorosi released the album Somewhere in the Real World, through Universal Music Australia, on 24 May 2008.[23][24] The album tracks "Perfect" and "Start It" have both been used in promotions for the Seven Network. "Start It" is Channel 7's AFL song for 2008 and was used again in 2009. Released digitally and in stores on 24 May 2008, Somewhere in the Real World reached gold sales in Australia.

The single "Kiss Your Mama!" was serviced to radio on 3 August and released 8 September 2007.[25] On a special edition of Australian Idol she sang her hit song "Kiss Your Mama!".[26] This marked Amorosi's returned to the ARIA charts the first single in many years to be released, the song peaked at No. 15.

Amorosi released her second single "Perfect" digitally on 5 April and physically on 26 April 2008.[27] The single made it to number 1 on the digital iTunes charts on 7 June 2008, and a then equal highest charting singles of her career at No. 4. "Perfect" reached Platinum sales in Australia and was the most played Australian song on Australian radio for 2008. "Perfect" was nominated for the 2009 APRA awards for 'Most Played Australian Work'.

Following the success of her first two singles a third single was released from the album, the song "The Simple Things (Something Emotional)" was released on 20 September 2008. The Song received a video and achieved a top 40 peak. In December 2008 a video for the song "My House" was released onto her website, but never released as a single.

On 20 April 2009, a Vanessa fan website revealed details of a collaboration with U.S. band Hoobastank on a single titled "The Letter". The website, VanessaAmorosi.net, also provided the duet to be streamed in full.[28] Amorosi also appears in the video which was shot in Los Angeles at Lacy Street Studio with director Paul Brown (Alicia Keys, Jack White). The video and single was serviced to Australian media on 4 May. The single was released in Australia on 19 June 2009.[29]

Vanessa Amorosi's album Hazardous, became her third ARIA Top 10 album debuting at No. 7, It was also the week's highest album debut by an Australian artist and has been accredited Platinum by the Australian Recording Industry Association. The album has produced the singles "This Is Who I Am" (Amorosi's first #1), top 30 hit "Hazardous" and third single "Mr. Mysterious" featuring Seany B. Amorosi released the album to the German market in early June 2010.[30]

"This Is Who I Am" debuted at number 1 on the ARIA Charts for the week beginning 18 October 2009. This is Amorosi's first number 1 single. The single held the top spot for a second week in a row - becoming the first Australian artist to debut at No. 1 and hold No. 1 single since Silverchair's "Straight Lines" in 2007. "This Is Who I Am" has achieved 2× platinum sales in Australia making it her most successful single to date in her homeland.

With the success of her album and first single "This Is Who I Am", Amorosi released her second single and title track from the album Hazardous. Amorosi flew to Los Angeles to film the video for "Hazardous" with director Paul Brown (Prince, Alicia Keys), which was serviced Thursday, 17 December 2009. The single peaked at No. 29 on the ARIA Charts a solid follow-up single to her first number 1.

It was announced that Amorosi would collaborate with Mary J. Blige, so Amorosi flew to Los Angeles on 1 February to film the music video for her duet with Mary J. Blige for the upcoming single "Each Tear". The new version of the track will feature on an international re-release of Blige's latest record Stronger with Each Tear.[31]

On 4 March 2010, Amorosi announced "Mr. Mysterious" as the third single from the Hazardous album via newsletter.[32] During March 2010 Vanessa Amorosi supported Rob Thomas on his Australian leg of the Cradlesong Tour, as well as performing headline shows for her fans separately.

"Holiday" was released as the fourth single off Hazardous and charted in the top 50 on the ARIA charts.

In September 2010, Vanessa revealed on her official Twitter account she was back in the studio again with MachoPsycho in London. In October 2010, Amorosi wrote to her mailing list announcing she was writing and recording in Los Angeles for her new studio album,[33] which is described to "push boundaries" and "may even shock people".[34]

Amorosi's first single "Gossip" from her forthcoming album V was released on 1 July 2011 and became the No. 1 added song on Australian radio in the first week,[35] but did not chart in the ARIA Top 100 Singles. The second single "Amazing" was released 9 September 2011 and peaked at No. 83 on the ARIA Singles Chart.[36] The song was featured on Channel 7's AFL Grand Final ad which also resulted in Vanessa Amorosi performing at the[37] AFL Grand Final in 2011. 2011 also saw Vanessa work on such campaigns as Proactiv, Headspace and Kids Helpline. On 3 November 2011, Amorosi announced her album due for release on 11 November would be delayed until further notice.[38] In August 2012, Amorosi announced she was no longer with Universal Music, and would be looking to rebuild her career as an album artist.[3]

In a June 2014 interview with APN, she said she is currently working on a gospel album and her fifth studio album, which she revealed will be "completely different" to her previous releases.[39]

Dave Stewart announced on his website [40] that he has begun writing amazing new material with Vanessa that would be released later in the year or early next year.[41]

Vanessa finished recording her new album in early 2017, at Royal Studios in Memphis, with Dave Stewart serving as the producer. [42] The album now has a tentative release date of late 2017/early 2018, as mentioned in an interview with Jon Stevens,[43] the title of the album is currently undisclosed. Vanessa was in Los Angeles in March 2016 for a photo shoot for the album, and has recently returned to Hollywood where the post-production of the album continues.[44]

Following the release of Hazardous in 2009, Amorosi relocated to Los Angeles, California, where she currently lives.[39]

This article uses material from the article Vanessa Amorosi from the free encyclopedia Wikipedia and it is licensed under the GNU Free Documentation License.