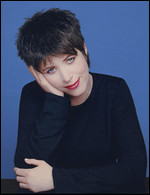 Diane Eve Warren (born September 7, 1956)[1][2] is an American songwriter. She rose to prominence in 1983, and has since written songs for and co-written songs with multiple singers, as well as for several films.

Warren has had nine number-one songs and 32 top 10 songs on the Billboard Hot 100 chart. Additionally, two of the top 13 hits in the Hot 100's 57-year history were written by her. Warren’s career catapulted in the late 1980s shortly after joining forces with the UK music company EMI when Warren became the first songwriter in the history of Billboard magazine to have seven hits, all by different artists, on the singles chart at the same time prompting the UK’s former Chairman of EMI Music Publishing Peter Reichardt to credit her as "the most important songwriter in the world". She has been rated the third most successful female artist in the UK.

Warren has won a Grammy Award, an Emmy Award, a Golden Globe Award, three consecutive Billboard Music Awards for Songwriter of the Year, and has been nominated for nine Academy Awards. She has been inducted into the Songwriters Hall of Fame and received a star on the Hollywood Walk of Fame. Her UK success saw her win an Ivor Novello Award from the British Academy of Songwriters, Composers and Authors when she received the Special International Award in 2008. Warren owns a publishing company, Realsongs, which gives her control over her compositions.

Warren, the youngest of three daughters, was born to David, an insurance salesman, and Flora Warren,[3] in the Los Angeles community of Van Nuys, where she said she felt misunderstood and "alienated" as a Jewish child growing up.[4] Her family's surname "Warren" was originally "Wolfberg", but her father changed the name because it sounded too Jewish.[5] Warren says she was rebellious as a child[4] and told NPR's Scott Simon that she got into trouble and ran away as a teen but returned because she missed her cat. As a child, Warren loved listening to the radio and dreamed of performing on the radio herself.[5] She was also influenced by music through her parents and her two older sisters who would play music.[6] She began writing music when she was 11 but took a more serious approach at 14, commenting "music saved me."[5][7] Warren has said that her mother asked her to give up her dream of a songwriting career[8] and take a secretarial job. However, her father continued to believe in her and encouraged her. In addition, he bought her a 12-string guitar and a metal shed for her to practice and took her to music auditions.[1] She wrote Celine Dion's 1996 song "Because You Loved Me" as a tribute to her father for his encouragement.[9] She briefly attended college at Los Angeles Pierce College and California State University, Northridge but considered it a waste[10] and spent more of her time writing songs while attending.[5]

On the February 12, 2016 edition of All Things Considered, Warren stated that she had been molested at age 12, and had later experienced sexual harassment and assault by a sound engineer during her working career.

She's actually more like the Emily Dickinson of Pop. As in the case of the great nineteenth-century reclusive New England poet known for her simple yet eloquent verses, Warren leads a life focused almost entirely on her art.

The original name for her publishing company, Realsongs, was "Warren Piece" because "War and Peace" was already taken.[11] In 1998, Realsongs and its international partner, EMI Music Publishing, distributed A Passion For Music, a six-CD box set that showcased her music. EMI Music's London office assisted in distributing 1,200 copies of the box set primarily to the film and television industry for consideration in soundtracks and other commercial endeavors. It was not marketed to consumers.[12] As of 2011, Warren's music has appeared in the soundtracks of over sixty films. She was awarded a star in the Hollywood Walk of Fame[13] in 2001.[14]

Warren wrote three songs for Carrie Underwood's debut album, Some Hearts (2005) that were "Lessons Learned", "Whenever You Remember" and the title track.

In 2010, Warren partnered with Avon Products as a celebrity judge for Avon Voices,[19] Avon's first ever global online singing talent search for women and songwriting competition for men and women. For the competition, Warren wrote a special anthem which was recorded by the finalists and produced by Humberto Gatica.[20] Warren has been recognized six times ASCAP Songwriter of the Year and four times Billboard’s Songwriter of the Year.[21]

Warren's success in the U.S. has been paralleled in the U.K., where she has been rated the third most successful female artist.[23] Peter Reichardt, former Chairman of EMI Music Publishing UK, credited her as "the most important songwriter in the world."[24]

Warren is the first songwriter in the history of Billboard magazine to have seven hits, all by different artists, on the singles chart at the same time. Warren has had nine of her compositions hit #1 in the US Billboard Hot 100, all by different artists, and overall more than 30 of her songs have hit the U.S. top ten. Additionally, two of the top 13 hits in the Hot 100's 57-year history were written by her - "How Do I Live" (number four) and "Un-Break My Heart" (number 13).[25] She has had an even bigger success on the U.S. Adult Contemporary charts, where sixteen of her songs have gone to #1, and overall more than 40 songs have hit the top ten on that chart. In the U.K., Warren has had three #1 hits, and more than 20 top ten hits. She has been inducted into the Songwriters Hall of Fame and received a star on the Hollywood Walk of Fame.[26]

Warren has never married,[27] and does not think of herself as a person of commitment. In interviews, she has stated a belief that her lack of a romantic life makes her more peculiar as a songwriter.[5] She had a relationship with producer/songwriter Guy Roche which ended in 1992[5] and claims she has not had another relationship since, commenting "I've never been in love like in my songs. I'm not like normal people. I'm no good at relationships. I draw drama to me — it's the Jew in me".[28] Although she considers herself to be cynical regarding romance, Warren does not let this affect her songwriting[5] and prefers to write alone, commenting "When I write with other people the experience is different. You have to compromise, which I have problems with. I'd rather listen to my own mind".[10]

In a 2000 interview, Warren explained that she never let go of music despite experiencing rejections, depression and poverty.[5] In 1994, Warren's house was damaged by the 1994 Northridge earthquake causing her to be miserable and homeless, drifting from hotels to rental houses. She has stated that therapy helped her with songwriting.[5] She has also revealed that she works 12–16 hours a day, always takes her keyboard whenever she travels[11] and is self-proclaimed and more active than when she was twenty years old.[3]

Warren does not usually allow anyone into her Hollywood Hills office[5] which she describes as a "cluttered, airless room...nothing has been moved or cleaned for 17 years because she is superstitious" and prefers to think of that room as her "secret world".[3] In that room, Warren records melodies with a tape recorder on which she plays them again and chooses the songs she likes the most.[3] But in an interview with CBS News Sunday Morning correspondent, Ben Tracy, she allowed part of the interview to be taped in the office.[29] Warren's mother has expressed concern that she is too immersed in her work, saying "she's always, constantly thinking of a song", and urges her to think about starting a family.[3]

Other awards and honors

This article uses material from the article Diane Warren from the free encyclopedia Wikipedia and it is licensed under the GNU Free Documentation License.