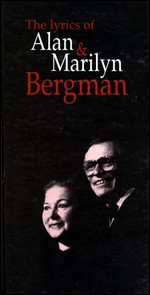 Alan Bergman (born September 11, 1925) and Marilyn Bergman (née Keith), born November 10, 1929) are American lyricists and songwriters. The pair have been married since 1958 and have written the music and lyrics for numerous celebrated television shows, films, and stage musicals. The Bergmans have won two Academy Awards for Best Original Song and have been inducted into the Songwriters Hall of Fame.

Alan Bergman was born to Jewish parents in Brooklyn, New York, in 1925,[1] and studied at University of North Carolina at Chapel Hill and earned his master's degree in music at UCLA. Marilyn Bergman was born in 1929, coincidentally at the same Brooklyn hospital where Alan had been born four years earlier, and studied music at The High School of Music & Art in New York before studying psychology and English at New York University.[2] Alan worked as a television director and songwriter at Philadelphia's WCAU-TV in the early 1950s. Johnny Mercer encouraged Alan to move to Los Angeles and become a professional songwriter.[3][4] Despite the geographical proximity of their upbringing in New York, the Bergmans did not meet until they had both moved to Los Angeles in the late 1950s. Marilyn had moved to California and was friends with songwriter Bob Russell and his wife, Anna, and later described "drif[ing] into songwriting really by accident because I had a fall and broke my shoulder and couldn't play piano so I started writing lyrics". Marilyn also felt that she lacked the discipline or talent required to become a concert pianist. The Bergmans had both become collaborators with composer Lew Spence, and only met when Spence suggested they all work together. The Bergmans married in 1958, and have a daughter, Julie Bergman Sender, who works as an independent film producer.[3][5]

The Bergmans wrote lyrics for "In the Heat of the Night" with music by Quincy Jones for the 1967 film of the same name, which has been described as their "breakthrough".[9] The couple would later work with Jones on Michael Jackson's soundtrack album for E.T. the Extra-Terrestrial (1982), for which they wrote the lyrics for "Someone In the Dark", and the 2007 Ennio Morricone tribute album We All Love Ennio Morricone for which they wrote lyrics to "I Knew I Loved You", which was sung by Celine Dion.[10]

The Bergmans' long relationship with the French composer Michel Legrand began in the late 1960s. The couple wrote English lyrics for Legrand's song "The Windmills of Your Mind" featured in The Thomas Crown Affair (1968), which won them their first Academy Award for Best Original Song at the 41st Academy Awards in 1969. The Bergmans and Legrand were subsequently nominated for the Best Original Song award in the following two years for "What Are You Doing the Rest of Your Life?" from The Happy Ending (1969) and "Pieces of Dreams" from the 1970 film of the same name. The couple's minor work with Legrand in this period included "Listen to the Sea" from Ice Station Zebra (1968) and "Nobody Knows" and "Sweet Gingerbread Man" from The Magic Garden of Stanley Sweetheart (1970).[11] Legrand would also feature eight of the Bergman's lyrics on his 1972 album with Sarah Vaughan.[12]

The Bergmans were also co-writers of "An American Reunion", the opening ceremony of the inaugural festivities at Washington D.C.'s Lincoln Memorial that marked Bill Clinton's first term as President of the United States in January 1993.[3] In the late 1990s the Bergmans received their most recent nominations for the Academy Award for Best Original Song, for "Moonlight" (composed by John Williams) for the 1995 film Sabrina, and "Love Is Where You Are" (music by Mark Isham) for the 1999 film At First Sight. 1999 was the same year that the Bergmans received their most recent Primetime Emmy Award for Outstanding Original Music and Lyrics for "A Time to Dream"" (music by Hamisch) for the AFI's AFI's 100 Years 100 Movies Special.

The Kennedy Center commissioned the Bergmans to write a song cycle in 2001, they chose to collaborate with the composer Cy Coleman. The resulting work, Portraits in Jazz: A Gallery of Songs was performed on May 17, 2002.[5] The Bergmans wrote the lyrics to Billy Goldenberg's television musical Queen of the Stardust Ballroom which won the couple their third Primetime Emmy Award Outstanding Achievement in Special Musical Material, it was later the couple's second Broadway show, Ballroom, which opened in 1978.[13]

In 2007 Alan Bergman released his first album as a vocalist, Lyrically, Alan Bergman, featuring lyrics written by him and his wife and arranged by Alan Broadbent and Jeremy Lubbock.[14] Reviewing the album for Allmusic, John Bush praised Bergman's "excellent interpretive skills" and Christopher Loundon in the JazzTimes described Bergman's voice as a "...revelation, suggesting both the wise, elder Sinatra and the astutely mellow Fred Astaire, with a touch of the offbeat dreaminess of Chet Baker."[15]

The Bergmans have had a long professional relationship with the singer and actress Barbra Streisand. In addition to their work on the films Yentl and The Way We Were, in which Streisand starred, the Bergmans wrote Streisand's "One Voice" concert which was released as a live album in 1987. Marilyn also served as the executive producer of the "One Voice" concert. The Bergmans' song "Ordinary Miracles" from Streisand's 1994 concert tour and HBO special won the couple their third Emmy Award, with the couple's script for the tour also being nominated for a CableACE Award. The Bergmans received their fifth Emmy nomination for the song "On the Way to Becoming Me" (music by Marvin Hamlisch) from the AFI tribute to Streisand.[2] The Bergmans have also served as board members of Streisand's charitable foundation.[16] Streisand's 2011 album What Matters Most was recorded in tribute to the Bergmans, and featured ten songs by the couple that she had not previously recorded.[17]

Most recently, The Bergman's collaborated with playwright Josh Ravetch in 2017 on Chasing Mem'ries: A Different Kind of Musical. The play opened to rave reviews as a world premiere at The Geffen Playhouse and was the recipient of the Edgerton New Play Award. The play starred Tyne Daly, Robert Forster and Scott Kradolfer. In the play, there were both classic Bergman songs and new songs written for the play that married in seamlessly with Ravetch's text. The songs became the inner-monologues of the characters in an unusual and touching way. It was one of the best received plays in the history of The Geffen Playhouse.

The Bergmans have been the recipients of numerous academic honors and lifetime achievement awards. The couple were inducted into the Songwriters Hall of Fame in 1980 and subsequently received the Johnny Mercer Award from the Hall of Fame in 1997.[3] The Bergmans were awarded honorary doctorates by the Berklee College of Music in 1995, they also received the Lifetime Achievement Award from the National Academy of Songwriters that year. In 1996 the couple were the recipients of the inaugural Fiorello Lifetime Achievement Award from New York City's Fiorello H. LaGuardia High School. The Bergmans were later inducted into the LaGuardia High School's Hall of Fame.[5][18] In 1986, Marilyn was awarded the Women in Film Crystal Award.[19] Marilyn was later appointed an Officer of the Order of Arts and Letters by the French Ministry of Culture in 1996.[20] In 1998 Marilyn received an Honorary doctorate from Trinity College in Hartford, Connecticut, and in 2011 Alan was presented with a Distinguished Alumnus award from his alma mater, the University of North Carolina. The Bergmans were the recipients of the National Music Publishers Association Lifetime Achievement Award in 2002, Marilyn was also the recipient of the Creative Arts Award from the Kaufman Cultural Center that same year.[3]

The Bergmans have held several executive positions in organizations connected with the arts. Marilyn served as the president and chairman of the board of the American Society of Composers, Authors and Publishers (ASCAP) for fifteen years, from 1994 to 2009. Bergman was elected president and chairman after having served five terms as the since 1984 as the first woman ever to serve on ASCAP's board of directors. Marilyn completed her term as president in April 2009 and has since continued to serve on the board of ASCAP.[2] Marilyn also served two terms as president of CISAC, The International Confederation of Performing Rights Societies. Alan has served on the boards of directors of The Johnny Mercer Foundation, The Artists' Rights Foundation and The Jazz Bakery.[2] The Bergmans have also served on the executive committee of the Music Branch of the Academy of Motion Picture Arts and Sciences and have been board members of the National Academy of Songwriters.[3] Marilyn also served as the president of the National Recording Preservation Board.[21]

The Bergmans' notable lyrics and compositions include:

This article uses material from the article Marilyn Bergman from the free encyclopedia Wikipedia and it is licensed under the GNU Free Documentation License.