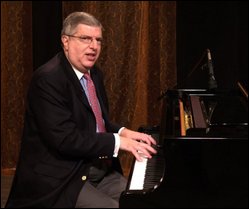 Marvin Frederick Hamlisch (June 2, 1944 – August 6, 2012) was an American composer and conductor. Hamlisch was one of only twelve people to win Emmy, Grammy, Oscar and Tony awards. This collection of all four is referred to as an "EGOT". He is one of only two people (along with Richard Rodgers) to have won those four prizes and a Pulitzer Prize.

Hamlisch was born in Manhattan, to Viennese-born Jewish parents Lilly (née Schachter) and Max Hamlisch.[1] His father was an accordionist and bandleader. Hamlisch was a child prodigy and, by age five, he began mimicking the piano music he heard on the radio. A few months before he turned seven, in 1951, he was accepted into what is now the Juilliard School Pre-College Division.[2]

His first job was as a rehearsal pianist for Funny Girl with Barbra Streisand. Shortly afterward, he was hired by producer Sam Spiegel to play piano at Spiegel's parties. This connection led to his first film score, The Swimmer.[2] His favorite musicals growing up were My Fair Lady, Gypsy, West Side Story, and Bye Bye Birdie.[3] Hamlisch attended Queens College, earning his Bachelor of Arts degree in 1967.[2]

Although Liza Minnelli's debut album included "The Travelin' Life", a song he wrote in his teens (originally titled "Travelin' Man"),[4] his first hit did not come until he was 21 years old. This song, "Sunshine, Lollipops, and Rainbows", co-written with Howard Liebling, was recorded by Lesley Gore and reached No. 13 on the Billboard Hot 100 in the summer of 1965.[5] His first film score was for The Swimmer, after the film's producer Sam Spiegel hired Hamlisch based on a piano performance Hamlisch did at a party.[5] Later he wrote music for several early Woody Allen films such as Take the Money and Run and Bananas. In addition, Hamlisch co-wrote the song "California Nights" (also with Liebling), which was recorded by Lesley Gore for her 1967 hit album of the same name. The Bob Crewe-produced single peaked at No. 16 on the Hot 100 in March 1967, two months after Gore had performed the song on the Batman TV series, in which she guest-starred as an accomplice to Julie Newmar's Catwoman.

Among his better-known works during the 1970s were adaptations of Scott Joplin's ragtime music for the motion picture The Sting, including its theme song, "The Entertainer". It hit No. 1 on Billboard's Adult Contemporary chart and No. 3 on the Hot 100, selling nearly 2 million copies in the U.S. alone. He had great success in 1973, winning two Academy Awards for the title song and the score for the motion picture The Way We Were and an Academy Award for the adaptation score for The Sting.[6] He won four Grammy Awards in 1974, two for "The Way We Were". In 1975, he wrote what, for its first 12 years, would be the original theme music for Good Morning America—it was built around four notes. He co-wrote "Nobody Does It Better" for The Spy Who Loved Me (1977) with his then-girlfriend Carole Bayer Sager, which would be nominated for an Oscar.[5] In the 1980s, he had success with the scores for Ordinary People (1980) and Sophie's Choice (1982). He also received an Academy-Award nomination in 1986 for the film version of A Chorus Line. His last projects included The Informant! (2009), starring Matt Damon and directed by Steven Soderbergh.[5] Prior to his death, he completed his first children's book Marvin Makes Music, which included the original music "The Music in My Mind" with words by Rupert Holmes, and the score for the HBO film Behind the Candelabra (2013), also directed by Soderbergh and starring Damon and Michael Douglas as Liberace.

Hamlisch's first major stage work was in 1972 playing piano for Groucho Marx at Carnegie Hall for An Evening with Groucho. Hamlisch acted as both straight man and accompanist while Marx (at age 81) reminisced about his career in show business.[7] The performances were released as a two-record set, and remained very popular.[8]

He then composed the scores for the 1975 Broadway musical A Chorus Line, for which he won both a Tony Award and a Pulitzer Prize; and for the 1978 musical They're Playing Our Song, loosely based on his relationship with Carole Bayer Sager.[9]

At the beginning of the 1980s, his romantic relationship with Bayer Sager ended, but their songwriting relationship continued. The 1983 musical Jean Seberg, based on the life of the real-life actress, failed in its London production at the UK's National Theatre and never played in the U.S.[10] In 1986, Smile was a mixed success and had a short run on Broadway.[5] The musical version of Neil Simon's The Goodbye Girl (1993) closed after only 188 performances, although he received a Drama Desk nomination, for Outstanding Music.[11]

Shortly before his death, Hamlisch finished scoring a musical theatre version of The Nutty Professor, based on the 1963 film.[12] The show played in July and August 2012, at the Tennessee Performing Arts Center (TPAC) in Nashville, aiming for a Broadway run.[12][13][14] The book is by Rupert Holmes, and the production was directed by Jerry Lewis.[15][16]

Hamlisch was musical director and arranger of Barbra Streisand's 1994 concert tour of the U.S. and England as well as of the television special, Barbra Streisand: The Concert, for which he received two of his Emmys. He also conducted several tours of Linda Ronstadt during this period, most notably on her successful 1996 Dedicated to the One I Love tour of arenas and stadiums.

Hamlisch also won two Golden Globes. He earned ten Golden Globe Award nominations, winning twice for Best Original Song, with "Life Is What You Make It" in 1972 and "The Way We Were" in 1974.[27] He also received six Emmy Award nominations, winning four times, twice for music direction of Barbra Streisand specials, in 1995 and 2001.[28] He shared the Pulitzer Prize for Drama in 1976 with Michael Bennett, James Kirkwood, Nicholas Dante, and Edward Kleban for his musical contribution to the original Broadway production of A Chorus Line.[5]

Hamlisch received a Lifetime Achievement Award in 2009 at the World Soundtrack Awards in Ghent, Belgium. He was also inducted into the Long Island Music Hall of Fame in 2008.[29] In 2008, he appeared as a judge in the Canadian reality series Triple Sensation which aired on the Canadian Broadcasting Corporation. The show was aimed to provide a training bursary to a talented young man or woman with the potential to be a leader in song, dance, and acting.[30][31] In 2008, Hamlisch was also inducted into the American Theatre Hall of Fame.[32]

In May 1989, Hamlisch married Terre Blair, a native of Columbus, Ohio, who was the weather and news anchor for that city's ABC affiliate, WSYX-Channel 6.[33][34][35] The marriage lasted until his death.[36] Hamlisch's prior relationship with lyricist Carole Bayer Sager inspired the musical They're Playing Our Song.[37]

Marvin Hamlisch died on August 6, 2012. The cause of death was respiratory arrest. The Associated Press described him as having written "some of the best-loved and most enduring songs and scores in movie history".[38] Streisand released a statement praising Hamlisch, stating it was "his brilliantly quick mind, his generosity and delicious sense of humor that made him a delight to be around."[5] Aretha Franklin called him "classic and one of a kind", and one of the "all-time great" arrangers and producers.[39] The head of the Pasadena Symphony and Pops commented that Hamlisch had "left a very specific ... original mark on American music and added to the great American songbook with works he himself composed."[40]

At 8:00 p.m. EDT on August 8, the marquee lights of the 40 Broadway theaters were dimmed for one minute in tribute to Hamlisch,[41][42] an honor traditionally accorded posthumously to those considered to have made significant contributions to the theater arts.[43][44][45]

Barbra Streisand, Aretha Franklin, and Liza Minnelli took turns singing songs by Hamlisch during a memorial service for the composer on September 18, 2012.[46] At the 2013 Academy Awards, Streisand sang "The Way We Were" in Hamlisch's memory.

Hamlisch was the primary conductor for the Pittsburgh Pops from 1995 until his death.[47]

The Dallas Symphony Orchestra performed a rare Hamlisch classical symphonic suite titled Anatomy of Peace (Symphonic Suite in one Movement For Full Orchestra/Chorus/Child Vocal Soloist) on November 19, 1991.[48] It was also performed at Carnegie Hall in 1993,[49] and in Paris in 1994 to commemorate D-Day.[50] The work was recorded by the Dallas Symphony Orchestra in 1992.[51] The Anatomy of Peace was a book by Emery Reves which expressed the world-federalist sentiments shared by Albert Einstein and many others in the late 1940s, in the period immediately following World War II.[52]

This article uses material from the article Marvin Hamlisch from the free encyclopedia Wikipedia and it is licensed under the GNU Free Documentation License.