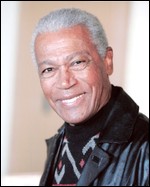 Pate learned to play piano and tuba as a child, and later picked up the bass and learned arranging while serving in the Army.[1]

Following stints with Coleridge Davis and Stuff Smith in the 1940s,[1] in 1951 Pate was recording on Chess Records with Eddie South and his Orchestra, credited on bass and arrangements. This was also the first of a series of Chess recordings on which Pate collaborated with saxophonist Eddie Johnson.[3] In the 1950s he was also a resident arranger for Red Saunders' house band at the Club DeLisa.

Johnny Pate's trio recorded for a number of local Chicago labels like Gig and Talisman. For the Cincinnati based Federal Records, the Johnny Pate Quintet had a hit with "Swinging Shepherd Blues," which reached number 17 on Billboard's R&B chart in spring 1958.[1]

One of the last albums on which Pate played bass was James Moodys 1958 album Last Train from Overbrook, released on the Chess subsidiary, Argo Records.[4]

Pate did the arrangements for B.B. King's album Live at the Regal in November 1964.[5]

Pate also did the arrangements for Bee Gees' 1973 album Life in a Tin Can.

In the early 1960s, Pate was hired by OKeh Records producer/A&R director Carl Davis to write arrangements for the label. Davis had had previous hits with artists such as Walter Jackson, Major Lance, Ted Taylor and The Opals.

Pate, Curtis Mayfield and The Impressions first teamed in January 1963 recording the ballad "Sad Sad Girl and Boy," which mid-charted in Cashbox magazine's charts. The following single, "It's All Right," stayed at number one R&B for two weeks and hit number four pop in fall 1963; it was followed by "Talking about My Baby," "I'm So Proud," "Keep on Pushing". The Keep on Pushing LP peaked at number eight pop in fall 1964. Pate produced and recorded most of their hits at Universal Recording Studios in Chicago.[1]

Their success led the group's label, ABC-Paramount, to open a Chicago office on 14th and Michigan and appoint Pate as A&R director in 1964. One of the acts he signed, the Marvelows, had a number seven R&B hit with "I Do". "I Do" was followed by another hit with "In the Morning."

Other acts signed to ABC-Paramount through the Chicago branch were the Trends, the Kittens, and former Vee-Jay Records star Betty Everett. He also did the arrangements for Major Lance's Monkey Time.[6][7]

In 1968, Pate began doing arrangements for Curtis Mayfield's Curtom label. Leaving in 1972, he worked on numerous recordings including the horn arrangements for the Bobby Bland and B.B. King Together Again...Live (1976), and the 1978 album Words and Music by Lonette McKee on Warner Bros. Records. Pate also made soundtracks for films including Shaft in Africa in 1973.

In 2006, TNC Records released an 80th birthday tribute album. His song "Shaft in Africa", was sampled by producer Just Blaze, for the Jay-Z single "Show Me What You Got". It was later sampled by producer K-Def for Diddy's "We Gon' Make It" featuring Jack Knight.

Pate was also the arranger and conductor for Wes Montgomery's album Movin' Wes, released in 1965 and re-released in 1981.[8]

This article uses material from the article Johnny Pate from the free encyclopedia Wikipedia and it is licensed under the GNU Free Documentation License.