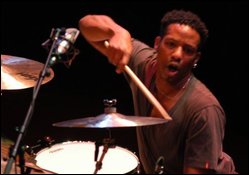 Kilson was born in Washington, D.C.. He started on trumpet at ten, switched to trombone at 11, then to drums at 16. He studied at the Berklee College of Music from 1980 to 1985 and took private lessons from Alan Dawson during 1982–89. Following this he did a tour of Europe with Walter Davis.

Kilson is perhaps best known for his work with Holland.[1] He plays on Holland's Grammy Award-nominated 1999 album Prime Directive and his Grammy-winning 2002 release What Goes Around.

Kilson has also led his own quartet ensemble along with James Genus and Tim Hagans. His debut release as a leader, Pots and Pans, appeared in 2006.[1]

This article uses material from the article Billy Kilson from the free encyclopedia Wikipedia and it is licensed under the GNU Free Documentation License.

Georg Friedrich Händel Menuett und Air aus der Wassermusik-Suite Nr. 1 F-Dur
Update Required To play the media you will need to either update your browser to a recent version or update your Flash plugin.