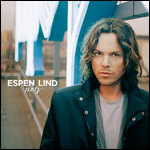 Espen Lind (born 13 May 1971) is a Norwegian record producer, songwriter, singer, and multi-instrumentalist. He is one half of the production team Espionage. Espen is also a mentor on the Norwegian version of The Voice.

Espen Lind released his first solo album, Mmm...Prepare To Be Swayed, in 1995 under the moniker, 'Sway'. Only released in Norway, it received mixed reviews and sold approximately 5,000 copies. His commercial breakthrough came in 1997 with the single "When Susannah Cries" which was a hit in several European and Latin American countries, including Norway where it was number one for six weeks. His second album Red went on to sell more than 100,000 copies in Norway, and 350,000 copies worldwide, earning Lind three Norwegian Grammy awards (Spellemannprisen) in 1998, including Artist of the Year.

2000 saw Lind releasing his third album, This Is Pop Music, and the singles "Black Sunday" and "Life Is Good". The album also contains a duet, "Where the Lost Ones Go," with Norwegian singer Sissel Kyrkjebø. The album reached gold status in Norway but was generally perceived to be a commercial disappointment compared to its predecessor. After a 3-year break Lind released a new single, "Unloved," in December 2004, followed by the album April, in January 2005.

In January 2009 he received the award "Årets Spelleman" (artist of the year) at the Norwegian Grammy Awards.

During the past few years Espen Lind has done a lot of writing and producing, most notably as co-writer of "Irreplaceable" by Beyoncé and "Drive By" and "Hey, Soul Sister" by Train. Together with writing partner Amund Bjørklund in the production team Espionage he has also written and/or produced songs for artists Lionel Richie, Ne-Yo, Chris Brown and Leona Lewis. Morten Harket covered Lind's "Scared of Heights" for his album Out of My Hands.

The following is a discography of albums and singles released by Norwegian music artist Espen Lind.

This article uses material from the article Espen Lind from the free encyclopedia Wikipedia and it is licensed under the GNU Free Documentation License.