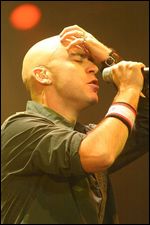 Edward Joel Kowalczyk (born July 16, 1971)[1] is the former lead singer of the band Live. Since leaving Live in 2009, he has launched a solo career. His first album, Alive, was released worldwide in June and July 2010.

Ed Kowalczyk was the lead singer and primary songwriter for the band Live. In 2009, he left the band and the other three members issued a statement detailing what they felt were inappropriate actions by Kowalczyk.[2] Kowalczyk is being sued by the band, seeking damages and an injunction against using the name "Live."[3]

Following his departure from Live, Kowalczyk recorded a solo album, Alive, which was released in 2010.

Collaboration with other musicians

Kowalczyk has worked with musicians Stuart Davis and Glen Ballard and singers Anouk, Neneh Cherry and Adam Duritz of Counting Crows. He featured on the song "Evolution Revolution Love," from the 2001 Tricky album Blowback. He collaborated with Chris Frantz, Jerry Harrison and Tina Weymouth (ex-Talking Heads, then performing as The Heads) on the song "Indie Hair" from their 1996 album No Talking, Just Head.

Kowalczyk performed John Lennon's "Imagine" with Slash in 2003 at "Peace on the Beach," a rally to protest the coming War in Iraq.[4] In 2008 he appeared in a video with will.i.am from The Black Eyed Peas, John Legend, Scarlett Johansson and Nick Cannon, supporting US Presidential candidate Barack Obama and appeared at campaign rallies for Obama with will.i.am.

He appeared in the David Fincher film Fight Club as a waiter, his only film acting credit to date.[1]

Kowalczyk is married and has three daughters. He announced the birth of his third daughter, Cecilia, on April 14, 2011. He grew up in York, Pennsylvania of Polish descent and attended William Penn Senior High School in the York City School District, where he met the other three members of what would become Live. His father was a teacher at the local High School (Northeastern).

His younger brother Adam Kowalczyk is also a musician, who toured with Live from 1999 to 2009, playing rhythm guitar and providing backing vocals.

This article uses material from the article Ed Kowalczyk from the free encyclopedia Wikipedia and it is licensed under the GNU Free Documentation License.