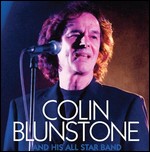 Colin Edward Michael Blunstone (born 24 June 1945) is an English pop singer-songwriter, best known as a member of the pop/rock band The Zombies, and for his participation on various albums with The Alan Parsons Project.[1]

Blunstone's plaintive, wistful voice was one of the factors making The Zombies' single, "She's Not There" (written by fellow band member Rod Argent), a big hit worldwide. After the amicable split of the band, shortly after completing the baroque pop classic LP, Odessey and Oracle, Blunstone briefly worked in the insurance business before resuming his musical career. In 1969, he signed with Deram Records and cut three singles under the pseudonym of Neil MacArthur, including a re-make of The Zombies' hit, "She's Not There" which charted in the UK.[2]

One Year (1971) produced by Chris White) was his first solo album, and included the song "Caroline Goodbye" about Blunstone's break-up with the model and actress Caroline Munro. This was followed by Ennismore and Journey. He then signed with Elton John's record label named The Rocket Record Company and released three albums, Planes (1976), Never Even Thought (1978) and Late Nights in Soho (1979), which was only released in Europe.

Blunstone also contributed to Dave Stewart's hit cover version of "What Becomes of the Brokenhearted" (1980).

He went on to appear on several albums by The Alan Parsons Project including Eye in the Sky, where he sings the hit single Old and Wise, and Ammonia Avenue. In 1984, he joined with other Parsons musicians to form Keats.

Blunstone has appeared many times on radio and television shows in the UK. He and his band performed several sessions for John Peel and Johnnie Walker, and on the Old Grey Whistle Test in 1971 where he performed live with a string quartet.

He has had only a limited acting career. He was in The Savages (2001) and Keep the Aspidistra Flying (1997) both as a singer. Other TV appearances include The Dan and Dusty Show (2004) as The Zombies, Shindig! Presents British Invasion Vol. 2 (1992) also as The Zombies, and Pop Quiz (1982). His sole film part was in Bunny Lake Is Missing (1965) a movie directed by Otto Preminger (as The Zombies) and starring Laurence Olivier.

Blunstone still tours to this day, sometimes on his own, occasionally in tours with 1960s bands such as Manfred Mann and most often with his old Zombies colleague Rod Argent. Some of his more recent albums are As Far As I Can See, the mid 1990s Echo Bridge and Out of the Shadows (with Rod Argent).

His solo album, The Ghost of You And Me was released in the UK, Benelux and Scandinavia on 9 March 2009. Blunstone completed a twelve date UK tour, his first in several years. He continues to tour with Rod Argent as The Zombies, and the original surviving members of The Zombies played four reunion concerts performing Odessey and Oracle, in April 2009.

This article uses material from the article Colin Blunstone from the free encyclopedia Wikipedia and it is licensed under the GNU Free Documentation License.