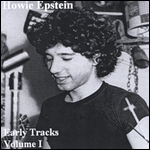 Howard Norman "Howie" Epstein (July 21, 1955  February 23, 2003) was a musician best known for his work with Tom Petty and the Heartbreakers as bassist.

Epstein was born in Milwaukee, Wisconsin and grew up in a musical household, but didnt start playing the bass until a couple of years before joining the Heartbreakers. His father, Sam, was a top local record producer who worked with various Rock and Soul groups in the 50s and 60s. Howie got to hang around the studios watching his father work, as well as do a little recording under his dads watchful eye at a very young age. "I would go into the bars with my father to check out the bands he was thinking of working with," Epstein recalls, "and a couple of times he let me use groups he was working with as back up musicians for stuff Id record." Howie attended Nicolet High School in Glendale, WI and was part of the class of 1973.

In the late 1960s and early 1970s, Howie played in a number of both rock and roll and country Milwaukee bands that were regionally popular, like MHB Experience, Egz, Winks, Forearm Smash, and The Craze. When hed gone as far as he could go in Milwaukee, Epstein decided to move to New York, but before he could pack his gear, he was lured to the West Coast by a drummer friend to play bass in a new band that singer-songwriter John Hiatt was forming in LA. He stuck with Hiatt for two years and two albums (Slug Line and Two Bit Monsters) and also toured briefly with Cindy Bullens.

Epstein then took a gig backing Del Shannon. While playing on a Shannon album that Tom Petty was producing (Drop Down And Get Me), Epstein impressed Tom with his ability. So when Ron Blair, who had been bassist with Tom Petty and The Heartbreakers since their inception in 1976, announced that he had enough of touring, Epstein was recruited into the line-up. "We all kind of thought Howie would get the job," says Heartbreakers' drummer Stan Lynch. "He seemed to have a real good feeling for what we were doing. Hes a good bass player, a real good singer, and he fit in real well." Epstein agreed that the transition of playing in these obscure bands to becoming part of a very popular, very established band was almost seamless. "Its been easier than I thought it would be. I was already familiar with most of their music just because Im a fan of the Heartbreakers, so it wasnt like I was coming in cold."

After joining the Heartbreakers, he started to take up the bass seriously "I had a tendency to play real busy, from all the years of playing rhythm guitar". Epstein found a natural style, which he said emphasizes "simplicity, playing in the pocket, getting into a steady groove. Ive always considered myself a good team player and thats the way that the Heartbreakers operate. Everyone listens to what everyone else is doing musically." He made his live debut at the Santa Cruz Civic Auditorium on September 1, 1982 on a tour to promote the album Long After Dark. When Tom Petty and The Heartbreakers played the US Festival four days later in San Bernardino, California, alongside Fleetwood Mac, The Police and Talking Heads, he took it all in his stride. In addition to playing bass and singing back-up vocals, he played mandolin.

"You gotta love him, I don't know if I ever tell him how good he is. Tonight, there was a line early in the show I could just barely sing. I was having to work harder than I normally do to make it, I was getting really close on the mike. I was thinking, 'Oh boy, I hope I can do this...' I got to it and I heard Howie singing it with me over his mike. It sounded great, it sounded like a double track. I just looked at him, he caught my eye like 'Yeah!' It made me feel great, 'cause I know he was thinking the same thing, 'I know he's tired, I'll cover him. Wham! Got it!' That's what a great band's all about. That's what it's all about." (Musician, April 1990)

He earned acclaim as a songwriter and a producer. Epstein produced two albums for John Prine, including 1991s The Missing Years (album), which won a Grammy for Best Contemporary Folk Recording, and Eric Andersens Memory Of The Future (1998).

Epstein formed a creative and personal partnership with Carlene Carter following her divorce from the English singer-songwriter Nick Lowe, and return to the United States in 1988. He helped Carter re-establish her career. Epstein produced her hit album I Fell in Love (1990), and co-authored the title track with his longtime collaborator, Milwaukee writer Perry M. Lamek. Carter's vocals 'I Fell In Love' earned her a Grammy nomination for Best Female Country Vocal Performance in 1991. Three years later, Epstein produced Carter's follow-up CD Little Love Letters. Epstein and Carter were engaged in the mid to late 1990s, but never married.

Epstein died of complications due to drug use; but an overdose has not been reported. Investigators were told Epstein had been using heroin. Howie was driven to St. Vincent Hospital by his girlfriend, who described him as "under distress."

Epstein was taking antibiotics for an illness, and he had recently suffered from flu, stomach problems and an abscess on his leg, friends said.

"Apparently he passed out in the bathroom, and (his girlfriend) drove him to the hospital," Madrid said.

He died on February 23, 2003 at the age of 47. Reportedly, he was extremely despondent over the death of his 16-year-old German Shepherd a few days earlier. In recent interviews, Tom Petty admitted that Epstein's behavior had become unpredictable: "He was just degenerating on us to the point where we thought keeping Howie in the band was actually doing him more harm than getting rid of him. His personal problems were vast and serious." He was interred at Second Home Cemetery in Greenfield, Wisconsin.

"We tried everything we could to reach him but it got to the point where his ability to do gigs was diminishing." Finally, Petty took the decision to recall Ron Blair to the Heartbreakers. He said, "Eventually, we realized that we were just contributing to the problem. When you're living a life where you really don't have any responsibilities, it's easy for evil forces to take over."

"I'm devastated," said Carlene Carter, the stepdaughter of country singer Johnny Cash and daughter of June Carter Cash. "I loved him very much. My kids thought of Howie as their father."

Petty wrote the following in an article for Rolling Stone in response to Howie's death: "...theres a great sadness, because Howie was never not a Heartbreaker. He just got to where he couldnt do it anymore. ...Its like you got a tree dying in the backyard. And youre kind of used to the idea that its dying. But you look out there one day and they cut it down. And you just cant imagine that beautiful tree isnt there anymore."

He is survived by brothers Craig and Bradley Epstein, and nieces Sarah, Samantha, and Hope.

This article uses material from the article Howie Epstein from the free encyclopedia Wikipedia and it is licensed under the GNU Free Documentation License.