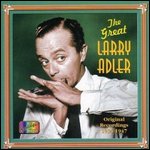 Lawrence "Larry" Cecil Adler (February 10, 1914[2] August 6, 2001) was an American musician, widely acknowledged as one of the world's most skilled harmonica players. Composers such as Ralph Vaughan Williams, Malcolm Arnold, Darius Milhaud and Arthur Benjamin composed works for him. During the later stage of his career he was known for his collaborations with popular musicians Sting, Elton John, Kate Bush, and Cerys Matthews.

Adler was born in Baltimore, Maryland, into a Jewish family and graduated from the Baltimore City College high school.[3] Adler taught himself harmonica (which he preferred to call a mouth-organ)[4] and began playing professionally at the age of 14. In 1927, the harmonica was popular enough that the Baltimore Sun newspaper sponsored a contest. His rendering of a Beethoven minuet won him the award, and a year later, he ran away from home to New York. After being referred by Rudy Vallée, Adler got his first theatre work, and caught the attention of orchestra leader Paul Ash, who placed Adler in a vaudeville act as "a ragged urchin, playing for pennies".[5] From there, he was hired by Florenz Ziegfeld and then by Lew Leslie (again as an urchin). Adler finally broke the typecasting and appeared in a dinner jacket in the 1934 Paramount film Many Happy Returns, and was hired by British theatrical producer C. B. Cochran to perform in a London revue. Adler found stardom in the United Kingdom and the British Empire, where, it has been written, harmonica sales increased twenty-fold and 300,000 people joined fan clubs.".[5]

Adler was one of the first harmonica players to perform major works written for the instrument, often written expressly for him: these include Jean Berger's Concerto for Harmonica and Orchestra "Caribbean" (1941), Cyril Scott's Serenade (harmonica and piano, 1936), Vaughan Williams' Romance in D-flat (harmonica, piano and string orchestra; premiered New York, 1952), Milhaud's Suite Anglais (Paris, May 28, 1947), Arthur Benjamin's Harmonica Concerto (1953), and Malcolm Arnold's Harmonica Concerto, Op. 46 (1954, written for The Proms). He recorded all these pieces (except the Scott Serenade), some more than once. Earlier, Adler had performed transcriptions of pieces written for other instruments, such as violin concertos by Bach and Vivaldi - he played his arrangement of Vivaldi's Violin Concerto in A minor with the Sydney Symphony. Other works he played in harmonica arrangements were by Bartók, Beethoven (Minuet in G), Debussy, Falla, Gershwin (Rhapsody in Blue), Mozart (slow movement from the Oboe Quartet, K. 470), Poulenc, Ravel (Boléro), Stravinsky and Walton.

During the 1940s, Adler and the American virtuoso dancer, Paul Draper, formed a popular act, touring nationally and internationally. He moved to the United Kingdom in 1949, and settled in London, where he remained for the remainder of his life.

The 1953 film Genevieve brought him an Oscar nomination for his work on the soundtrack (though his name was originally kept off the credits in the United States due to blacklisting). He scored a hit with the theme song of the French Jacques Becker movie Touchez pas au grisbi with Jean Gabin, written by Jean Wiener.

In 1994 for his 80th birthday Adler, along with George Martin, produced an album of George Gershwin songs, The Glory of Gershwin, on which Adler and Martin performed "Rhapsody in Blue." The Glory of Gershwin reached #2 in the UK Albums Chart in 1994.[6] Adler was an entertaining performer and showman. The concerts in support of The Glory of Gershwin also revealed that he was a competent pianist, when he opened each performance with Gershwin's "Summertime", playing piano and harmonica simultaneously. The album featured an all-star lineup of artists, including Peter Gabriel, Oleta Adams, Elton John, Sting, Jon Bon Jovi and Richie Sambora, Meat Loaf, Sinéad O'Connor, Robert Palmer, Cher, Kate Bush, Elvis Costello, Courtney Pine, Issy Van Randwyck, Lisa Stansfield and Carly Simon, all of whom sang Gershwin tunes live with an orchestra and Adler adding harmonica solos.

He died peacefully in St Thomas' Hospital, London, at the age of 87, on August 7, 2001. He was cremated at the Golders Green Crematorium, where his ashes remain.

Apart from his career as a renowned musician, Adler also made appearances in several movies, including Sidewalks of London (1938), in which he played a [harmonica virtuoso]. He was also known as a prolific letter writer, with his correspondence with the satirical magazine Private Eye becoming very popular in the United Kingdom. Adler wrote an autobiography — entitled It Ain't Necessarily So — in 1985, and worked as a food critic for Harpers & Queen for some time. Adler also appeared on the Jack Benny radio program[7] several times, entertaining disabled soldiers stateside during World War II. A further biography, Me and My Big Mouth appeared in 1994 but, in an interview for The Free-Reed Journal, he made clear that it should not be considered as such: 'That's a lousy book and I don't like it; it's ghosted . ... [It] has a certain amount of factual material but the author completely missed my style and my voice. That's why I hate the book.'[8]

Adler had four children, two grandchildren and two great grandchildren, one of whom was Peter Adler who fronted a band called the Action and others,[9] in Dublin, Ireland in the late 1960s. Adler was an atheist.[1] His brother, Jerry Adler (1918–2010) was also an accomplished harmonica player.

This article uses material from the article Larry Adler from the free encyclopedia Wikipedia and it is licensed under the GNU Free Documentation License.