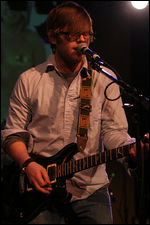 Eric Johnson (born August 17, 1954) is an American guitarist and recording artist from Austin, Texas. Best known for his success in the instrumental rock format, Johnson regularly incorporates jazz, fusion, New Age, and country and western music into his recordings.[1]

Guitar Player magazine calls Johnson "One of the most respected guitarists on the planet."[2] Johnson composes and plays not just instrumental songs but also vocal pieces, and plays piano as well as guitar.

Johnson's talent developed at an early age. Born into a musically inclined family, he and his three sisters studied piano, his brother started his own band in his teens; his father (an Austin physician) was a singing enthusiast. At age 11, Johnson took up the guitar and progressed rapidly through the music of his influences: Eric Clapton, Chet Atkins, Cream, Jimi Hendrix, Wes Montgomery, Jerry Reed, Bob Dylan, and Django Reinhardt, among others. His first professional experience came as a member of the psychedelic rock band Mariani at just 15 years of age. In 1968, Johnson recorded a demo tape with the group which saw extremely limited release; years later the recording would become a prized collector's item.[1][4][5][6][7]

After graduating from Holy Cross High School, Johnson briefly attended the University of Texas at Austin and traveled with his family to Africa. He eventually returned to Austin, and in 1974 joined the local fusion group Electromagnets. The group toured and recorded regionally, but failed to attract attention from major record labels and disbanded in 1977. However, the strength of Johnson's playing attracted a small cult following to the group's early recordings, and decades later their two albums were given wide release on compact disc.[8][9]

Following the demise of the Electromagnets, Johnson formed a touring trio, the Eric Johnson Group, with drummer Bill Maddox and bassist Kyle Brock. They played to respectable audiences on the Austin music scene, and in 1978 recorded a full length album entitled Seven Worlds. Although the album showcased Johnson's considerable playing ability, a combination of contract disputes, financial wrangling, and mismanagement held up the album's release and Johnson's career for several years. True to form, Seven Worlds was released two full decades later in 1998 on Ark21 Records after Johnson secured the rights to the master recordings.[10][11]

Unable to secure a new management contract, Johnson nonetheless continued to build his professional reputation by working as a session guitarist for nationally known and regional acts, appearing on recordings by Cat Stevens,[12] Carole King, and Christopher Cross[13] among others. All the while, he continued to toil on the local scene, thrilling audiences with his flashy-yet-tasteful electric guitar playing. His career rebounded in 1984 when pop superstar Prince caught one of Johnson's performances on the public television program Austin City Limits. However, despite the story of Johnson being signed to Warner Brothers courtesy of Prince, it was singer Christopher Cross and producer David Tickle who recommended Johnson to be signed to the label.[14] 1986 saw the release of Johnson's major-label debut, Tones with Tickle as co-producer.

Johnson's May 1986 Guitar Player magazine cover story "Who Is Eric Johnson and Why Is He On Our Cover" was a successful risky bold move that helped promote the release of Tones which brought Johnson considerable praise, if not widespread commercial success, and raised his profile in the guitar and music community.[15] Despite the track "Zap" being nominated for the 1987 Best Rock Instrumental Performance Grammy Award, the album did not sell well, and soon after Warner Bros. let Johnson's contract expire. He signed on with indie label Cinema Records which was distributed by Capitol Records.[16]

By the time Johnson released his Capitol Records debut Ah Via Musicom in 1990, he was regularly winning awards for his musicianship in the guitar press. During this period, Johnson was also drawing recognition for the rich, violin-like tone he coaxed from his vintage Fender Stratocaster. The album's second cut, "Cliffs of Dover," exemplified his unique sound and won Johnson a 1991 Grammy Award for Best Rock Instrumental Performance. Ah Via Musicom was a crossover hit, and was soon certified platinum. A 5.1 DVD-Audio version of Ah Via Musicom was released in 2002 from Capitol Records without Johnson's input, but was soon dropped. Johnson apologized to fans on his website for the DVD-Audio release.[17]

Johnson is an admitted perfectionist, and those traits seemed to work against Ah Via Musicom's follow-up release. Unhappy with his recordings, Johnson mastered then subsequently scrapped several completed tracks for the new album and delayed its release for a period of three years, on top of the three three years already spent touring in support of Ah Via Musicom, and also had to deal with setbacks involving musical growth and personal issues while recording his next album Venus Isle.[18][19]

When Venus Isle was finally released on September 3, 1996, it received mixed reviews and did not match the success of its predecessor. The album at this time has sold 250,000 units and Johnson was dropped from Capitol Records soon after that. It was a unique album with world influences which demonstrated Eric Johnson's growth as a guitarist, songwriter, producer, arranger, and vocalist. The Venus Isle title track showcased the talents of musician Amit Chatterjee.[20][21]

In 1998, Eric Johnson was among the judges in Musician magazine's Best Unsigned Bands competition, along with Ani DiFranco, Moby, Art Alexakis of Everclear, Keb' Mo', and Joe Perry of Aerosmith.[22]

Johnson eventually returned to the recording studio, releasing Souvenir, an internet release, in January 2002 on his own Vortexan Records. The album received nearly 65,000 plays in the first 7 weeks it was made available on mp3.com.[26] Johnson promoted Souvenir with an electric tour in 2003 and an acoustic tour in 2004.[27][28]

In 2004, Eric Johnson was invited by Eric Clapton to perform at Clapton's successful Crossroads Guitar Festival. According to Johnson, he was scheduled to perform onstage with Clapton, but the opportunity fell through.[29]

Johnson's next studio album Bloom was released in June 2005 also on Steve Vai's Favored Nations label. The album was divided into three sections based on vibe of songs that showcased Johnson's musical versatility.[30] His December 1988 Austin City Limits performance was released on both DVD and compact disc on New West Records in November 2005. His instructional guitar DVD, The Art of Guitar, (Hal Leonard Corporation) was also released at the end of 2005.

In January 2006, an individual named Brian Sparks was arrested for posing as Johnson by bilking businesses out of about $18,000 worth of guitars and equipment.[31] Also in 2006, Johnson's guitars that were stolen 24 years prior, were recovered.[32]

In September 2006, Eric Johnson took part in a theatrical production titled "Primal Twang: The Legacy of the Guitar" - the first definitive theatrical journey through the guitars colorful and surprisingly controversial 3500-year history, filmed by the Adams Entertainment Group. In September 2007, Johnson took part in a second theatrical production by Adams Entertainment titled "Love In: A Musical Celebration" in which he performed a Jimi Hendrix set which paid tribute to the year 1967 "The Summer Of Love."[33] Also in late 2006 Johnson also took part in a second G3 (tour) in South America with Joe Satriani and John Petrucci.

Johnson's current projects did include an all-acoustic project[34] and a live video from his 2006 Tour with Joe Satriani.[35] However these have been shelved, as Johnson is cutting a new studio album at this time.[36]

His hit single "Cliffs of Dover" appears in the game Guitar Hero III: Legends of Rock. In addition, Johnson is currently a featured instructor at Web site http://www.guitarinstructor.com.

Eric Johnson along with other Texas musicians such as Stephen Burton and Patrice Pike have signed up with Operation Immortality, a project to create a digital time capsule of their DNA and humanity's achievements in the event of global calamity.[37]

Eric Johnson is best known for playing stock Fender Stratocaster and Gibson ES-335 electric guitars through a triple amp setup that consists of Fender Amplifiers, Dumble Amplifiers, and Marshall amplification. The Dumble amp has not made an appearance on his live performances for sometime since and including his best known live DVD at the Austin City Limits. Eric uses effects pedals such as a Dallas Arbiter Fuzz Face, BK Butler Tube Driver, TC Electronic Stereo Chorus, Vox Cry Baby wah-wah, Electro-Harmonix Memory Man Delay, an MXR Digital Delay, a Line 6 Echo Pro Studio Modeler, and a Maestro Echoplex tape delay of which all are connected to multiple A/B boxes to create sounds and tones that are both clean and distorted; Although the majority of Eric's setup is predominantly vintage, he has recently started using more modern effects including a stereo chorus made by AnalogMan.

Eric Johnson occasionally substitutes his pedals for others, sometimes being spotted with a TubeWorks Tube Driver rather than a Butler one. He has also been seen using the Xotic AC Booster as well as a Boss DS-1 and a Smoky Signal Tubeless Overdrive.

Eric Johnson was also responsible for putting the Tube Driver pedal created by Brent Butler on the map which is an essential part of his guitar sound.[38]

Johnson has also played other guitar brands such as Robin, Rickenbacker, and Jackson Charvel, which appears on the cover of the Ah Via Musicom album.

He has also been known to use series wired or 'coil tapped' Dimarzio HS-2's in the neck and bridge position of his stratocasters; although this setup is not hum-cancelling, it still cancels around 70% of the AC hum.

In 2001, Eric Johnson added a Custom Shop '59 Les Paul Reissue to his guitars of choice.

C. F. Martin & Company released a limited-edition signature Eric Johnson Signature MC-40 in 2003, built to his specifications. Johnson donated five percent of the profits from his signature Martin guitar to Jefferson Medical College as a tribute to his father who attended.[39]

Johnson was also featured in a video for Line6 GuitarPort product.

In late 2006, Johnson switched from recording in analog format[40] to digital format.[41]

Guitarist Alex Lifeson of Rush (band) gave a thank you in the liner notes in the Counterparts (album) to Johnson for being the inspiration for the guitar solo in the song "Cut To The Chase".

Guitarist Steve Morse recorded a song titled "TruthOla," which is a tribute to Jeff Beck, Alex Lifeson and Eric Johnson. The song is on Morse's album "Major Impacts".

This article uses material from the article Eric Johnson from the free encyclopedia Wikipedia and it is licensed under the GNU Free Documentation License.