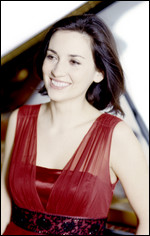 Ivana Gavrić (born in Sarajevo) is a British pianist. She was named Newcomer of the Year at the BBC Music Magazine Awards 2011.[1]

The daughter of pianist Zrinka Gavrić, Ivana Gavrić commenced her studies at the age of six at the Central Junior Music School of Sarajevo. Following her move to the UK in 1992, she attended The Latymer School and the Guildhall School of Music Junior Department, where she was awarded the Keyboard Prize, and studied with James Gibb. She went on to read music at St Catharine's College, Cambridge where she was an Instrumental Award Holder. She completed her Masters in Advanced Performance with Distinction at the Royal College of Music, where she studied with Niel Immelman. She complemented her studies in masterclasses with Dmitri Bashkirov, Ferenc Rados, Menahem Pressler, Pascal Devoyon and Alexander Satz.

Gavrić released her debut disc In the mists, featuring works by Janáček, Schubert, Liszt and Rachmaninov, on Champs Hill Records in August 2010.[3] The CD was named Instrumental Choice of the Month by BBC Music Magazine,[4] was nominated as “outstanding” in International Record Review,[5] and received four-star reviews in The Guardian,[6] Independent on Sunday[7] and The Telegraph.[8]

Gavrić released her second album From the street, featuring works by Janáček, Ravel and Prokofiev on Champs Hill Records in October 2011.[9] The disc was award the "Outstanding" accolade by International Record Review[10] and received 5 stars in BBC Music Magazine.[11]

Gavrić performed on the soundtracks of Anthony Minghella's Breaking and Entering and the BBC Two series The Line of Beauty, where she plays the role of pianist Nina Glaserova.[12]

At the April 2011 BBC Music Magazine Awards, Gavrić was named Newcomer of the Year.

This article uses material from the article Ivana Gavric from the free encyclopedia Wikipedia and it is licensed under the GNU Free Documentation License.

Felix Draeseke Serenade für Orchester D-Dur op.49
Update Required To play the media you will need to either update your browser to a recent version or update your Flash plugin.