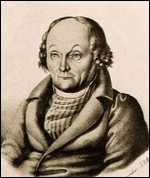 Nägeli was born in Wetzikon, Switzerland. He studied under his father as a child, and then opened a private music shop and publishing firm in the 1790s. In 1803 he began publishing the Repertoire des Clavecinistes, which included the first editions of keyboard pieces by composers such as Muzio Clementi, Johann Baptist Cramer, and Ludwig van Beethoven. He founded two singing societies (Sängervereine) in Zurich, in addition to writing profusely on music theory and aesthetics, as well as introductory treatises for students. He died in Zurich in 1836.

Much of Nägeli's compositional output consists of keyboard works and songs. His "Gold'ne Abendsonne" was adapted by others for various purposes. One version of the tune, sung by a bird (feathered) on Today, was described by its presenters as a "Folk Song", but also appears in various music editions of the Metrical psalter (as the tune "Zurich"), where it is correctly attributed to Nägeli.

Nowadays he is probably best known for the hymn (and psalm) tune Dennis.[1]

This article uses material from the article Hans Georg Nägeli from the free encyclopedia Wikipedia and it is licensed under the GNU Free Documentation License.

Hans Georg Nägeli Toccata Nr.1 f-moll
Update Required To play the media you will need to either update your browser to a recent version or update your Flash plugin.