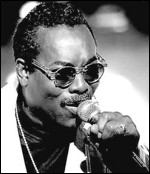 A major figure in the development of American soul music, Pickett recorded over 50 songs which made the US R&B charts, many of which crossed over to the Billboard Hot 100. Among his best-known hits are "In the Midnight Hour" (which he co-wrote), "Land of 1,000 Dances", "Mustang Sally", and "Funky Broadway".[2]

Pickett was inducted into the Rock and Roll Hall of Fame in 1991, in recognition of his impact on songwriting and recording.[3]

Pickett was born March 18, 1941 in Prattville, Alabama,[2] and sang in Baptist church choirs. He was the fourth of 11 children and called his mother "the baddest woman in my book," telling historian Gerri Hirshey: "I get scared of her now. She used to hit me with anything, skillets, stove wood — (one time I ran away) and cried for a week. Stayed in the woods, me and my little dog." Pickett eventually left to live with his father in Detroit in 1955.[4]

Pickett's forceful, passionate style of singing was developed in the church and on the streets of Detroit,[3] under the influence of recording stars such as Little Richard, whom he referred to as "the architect of rock and roll."

In 1955, Pickett joined the Violinaires[5], a gospel group. The Violinaires played with another gospel group on concert tour in America. After singing for four years in the popular gospel-harmony group, Pickett, lured by the success of gospel singers who had moved to the lucrative secular music market, joined the Falcons in 1959.[3]

By 1959, Pickett recorded the song "Let Me Be Your Boy" with the Primettes as background singers. The song is the B-side of his 1963 single "My Heart Belongs to You".

The Falcons were an early vocal group bringing gospel into a popular context, thus paving the way for soul music. The group featured notable members who became major solo artists; when Pickett joined the group, Eddie Floyd and Sir Mack Rice were members. Pickett's biggest success with the Falcons was "I Found a Love", co-written by Pickett and featuring his lead vocals. While only a minor hit for the Falcons, it paved the way for Pickett to embark on a solo career. Pickett later had a solo hit with a re-recorded two-part version of the song, included on his 1967 album The Sound of Wilson Pickett.

Soon after recording "I Found a Love", Pickett cut his first solo recordings, including "I'm Gonna Cry", in collaboration with Don Covay. Pickett also recorded a demo for a song he co-wrote, "If You Need Me", a slow-burning soul ballad featuring a spoken sermon. Pickett sent the demo to Jerry Wexler, a producer at Atlantic Records. Wexler gave it to the label's recording artist Solomon Burke, Atlantic's biggest star at the time. Burke admired Pickett's performance of the song, but his own recording of "If You Need Me" became one of his biggest hits (#2 R&B, #37 pop) and is considered a soul standard. Pickett was crushed when he discovered that Atlantic had given away his song. When Pickett—with a demo tape under his arm—returned to Wexler's studio, Wexler asked whether he was angry about this loss, but denied it saying "It's over".[6] Pickett's version was released on Double L Records and was a moderate hit, peaking at #30 R&B and #64 pop.

Pickett's first significant success as a solo artist came with "It's Too Late," an original composition (not to be confused with the Chuck Willis standard of the same name). Entering the charts on July 27, 1963, it peaked at #7 on the R&B chart (#49 pop); the same title was used for Pickett's debut album, released in the same year. Compiling several of Pickett's single releases for Double L, It's Too Late showcased a raw soulful sound that foreshadowed the singer's performances throughout the coming decade. The single's success persuaded Wexler and Atlantic to buy Pickett's recording contract from Double L in 1964.

The genesis of "In the Midnight Hour" was a recording session on May 12, 1965, at which Wexler worked out a powerful rhythm track with studio musicians Steve Cropper and Al Jackson of the Stax Records house band, including bassist Donald "Duck" Dunn. (Stax keyboard player Booker T. Jones, who usually played with Dunn, Cropper and Jackson as Booker T. & the M.G.'s, did not play on the studio sessions with Pickett.) Wexler said to Cropper and Jackson, "Why don't you pick up on this thing here?" He performed a dance step. Cropper explained in an interview that Wexler told them that "this was the way the kids were dancing; they were putting the accent on two. Basically, we'd been one-beat-accenters with an afterbeat; it was like 'boom dah,' but here was a thing that went 'um-chaw,' just the reverse as far as the accent goes."[9]

For his next sessions, Pickett did not return to Stax, as the label's owner, Jim Stewart, had decided in December 1965 to ban outside productions. Wexler took Pickett to Fame Studios, a studio also with a close association with Atlantic Records, located in a converted tobacco warehouse in nearby Muscle Shoals, Alabama. Pickett recorded some of his biggest hits there, including the highest-charting version of "Land of 1,000 Dances", which was his third R&B #1 and his biggest pop hit, peaking at #6. It was a million-selling disc.[8]

Near the end of 1967, Pickett began recording at American Studios in Memphis with producers Tom Dowd and Tommy Cogbill, and began recording songs by Bobby Womack. The songs "I'm in Love," "Jealous Love," "I've Come a Long Way," "I'm a Midnight Mover," (co-written by Pickett and Womack), and "I Found a True Love" were Womack-penned hits for Pickett in 1967 and 1968. Pickett recorded works by other songwriters in this period; Rodger Collins' "She's Lookin' Good" and a cover of the traditional blues standard "Stagger Lee" were Top 40 hits Pickett recorded at American. Womack was the guitarist on all recordings.

Pickett returned to Fame Studios in late 1968 and early 1969, where he worked with a band that featured guitarist Duane Allman, Hawkins, and bassist Jerry Jemmott. A #16 pop hit cover of The Beatles' "Hey Jude" came out of the Fame sessions, as well as the minor hits "Mini-Skirt Minnie" and "Hey Joe"(Jimi Hendrix hit).

Pickett then teamed up with established Philadelphia-based hitmakers Gamble and Huff for the 1970 album Wilson Pickett in Philadelphia, which featured his next two hit singles, "Engine No. 9" and "Don't Let the Green Grass Fool You", the latter selling one million copies.[8]

Following these two hits, Pickett returned to Muscle Shoals and the band featuring David Hood, Hawkins and Tippy Armstrong. This lineup recorded Pickett's fifth and last R&B #1 hit, "Don't Knock My Love, Pt. 1".[2] It was another Pickett recording that rang up sales in excess of a million copies.[8] Two further hits followed in 1971: "Call My Name, I'll Be There" (#10 R&B, #52 pop) and "Fire and Water" (#2 R&B, #24 pop), a cover of a song by Free.

Pickett recorded several tracks in 1972 for a planned new album on Atlantic, but after the single "Funk Factory" reached #11 R&B and #58 pop in June 1972, he left Atlantic for RCA Records. His final Atlantic single, a cover of Randy Newman's "Mama Told Me Not to Come," was culled from Pickett's 1971 album Don't Knock My Love.

In 2010, Rhino Handmade released a comprehensive compilation of these years titled Funky Midnight Mover – The Studio Recordings (1962–1978). The compilation included all recordings originally issued during Pickett's Atlantic years along with previously unreleased recordings. This collection was sold online only by Rhino.com.

Pickett continued to record with success on the R&B charts for RCA in 1973 and 1974, scoring four top 30 R&B hits with "Mr. Magic Man", "Take a Closer Look at the Woman You're With", "International Playboy" (a re-recording of a song he had previously recorded for Atlantic), and "Soft Soul Boogie Woogie". However, he was failing to cross over to the pop charts with regularity, as none of these songs reached higher than #90 on the Hot 100. In 1975, with Pickett's once-prominent chart career on the wane, RCA dropped Pickett from the label. After being dropped, he formed the short-lived Wicked label, where he released one LP, Chocolate Mountain. In 1978, he made a disco album with Big Tree Records titled Funky Situation, which is a coincidence as, at that point, Big Tree was distributed by his former label, Atlantic. The following year, he released an album on EMI titled I Want You.

Pickett continued to record sporadically with several labels over the following decades (including Motown), occasionally making the lower to mid-range of the R&B charts, but he had no pop hit after 1974. His last record was issued in 1999, although he remained fairly active on the touring front until falling ill in 2004.

Pickett appeared in the 1998 film Blues Brothers 2000, in which he performed "634–5789" with Eddie Floyd and Jonny Lang. He was previously mentioned in the 1980 film Blues Brothers, which features several members of Pickett's backing band, as well as a performance of "Everybody Needs Somebody to Love."

Pickett's personal life was troubled. In 1991, he was arrested for allegedly yelling death threats while driving a car over the front lawn of Donald Aronson, the mayor of Englewood, New Jersey. Pickett agreed to perform a benefit concert in exchange for having the charges dropped.[11] The following year, he was charged with assaulting his girlfriend[12].

In 1993, Pickett struck an 86-year-old pedestrian, Pepe Ruiz, with his car in Englewood.[11] Ruiz, who had helped organize the New York animation union, died later that year.[13] Pickett pleaded guilty to drunken driving charges and received a reduced sentence of one year in jail and five years probation.[14][15]

Throughout the 1990s, despite his personal troubles, Pickett was repeatedly honored for his contributions to music. In addition to being inducted into the Rock and Roll Hall of Fame in 1991, his music was prominently featured in the film The Commitments, with Pickett as an off-screen character. In 1993, he was honored with a Pioneer Award by the Rhythm and Blues Foundation.

Pickett was a popular composer, writing songs that were recorded by many artists, including Led Zeppelin, Van Halen, the Rolling Stones, Aerosmith, the Grateful Dead, Booker T. & the MGs, Genesis, Creedence Clearwater Revival, Hootie & the Blowfish, Echo & the Bunnymen, Roxy Music, Bruce Springsteen, Los Lobos, the Jam and Ani DiFranco, among others.

He co-starred in the 2002 documentary Only the Strong Survive, directed by D. A. Pennebaker, a selection of both the 2002 Cannes and Sundance Film Festivals. In 2003, Pickett was a judge for the second annual Independent Music Awards to support independent artists' careers.[17]

Pickett spent the twilight of his career playing dozens of concert dates every year until 2004, when he began suffering from health problems. While in the hospital, he returned to his spiritual roots and told his sister that he wanted to record a gospel album, but he never recovered.

Pickett was the father of six children.

On September 10, 2014, TVOne's Unsung program aired a documentary that focused on Pickett's life and career.[18]

Pickett died of a heart attack on January 19, 2006, in Reston, Virginia. He was 64.[19] He was laid to rest in a mausoleum at Evergreen Cemetery in Louisville, Kentucky.[20] Pickett spent many years in Louisville. The eulogy was delivered by Pastor Steve Owens of Decatur, Georgia. Little Richard, a long-time friend of Pickett's, spoke about him and preached a message at the funeral.[21] Pickett was remembered on March 20, 2006, at New York's B.B. King Blues Club with performances by the Commitments, Ben E. King, his long-term backing band the Midnight Movers, soul singer Bruce "Big Daddy" Wayne, and Southside Johnny in front of an audience that included members of his family, including two brothers.

This article uses material from the article Wilson Pickett from the free encyclopedia Wikipedia and it is licensed under the GNU Free Documentation License.