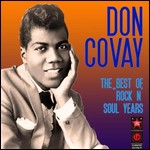 Writing in the Washington Post after his death, Terence McArdle said, "Mr. Covay’s career traversed nearly the entire spectrum of rhythm-and-blues music, from doo-wop to funk."[2]

Donald Randolph was born in Orangeburg, South Carolina, United States. His father, a Baptist preacher, died when Don was eight.[3] Covay resettled in Washington, D.C., in the early 1950s and initially sang in the Cherry Keys,[note 1] his family's gospel quartet. He crossed over to secular music as a member of the Rainbows and made his first recordings with that group in 1956.[4]

Covay's solo career began in 1957 as part of the Little Richard Revue, when he worked both as the star's chauffeur and as an opening act. A single, "Bip Bop Bip", on which Covay was billed as "Pretty Boy", was released on Atlantic, produced by Little Richard and featuring his backing band, the Upsetters.

Over the next few years Covay drifted from label to label, eventually signing with Columbia Records in 1961, but success remained elusive. Later that year, however, he had his first chart success, when "Pony Time", a song he co-wrote with fellow Rainbows member John Berry, reached No. 60 on the Billboard pop chart. It was issued by the small Arnold label and credited to his group, the Goodtimers. The song was later recorded by Chubby Checker and became a US No. 1 single.[4]

In 1962 Covay had his first hit under own name, "The Popeye Waddle", a dance-oriented track. He also started writing songs for Roosevelt Music in the Brill Building in New York City, writing a hit for Solomon Burke, "I'm Hanging Up My Heart for You".[5] Gladys Knight & the Pips reached the US Top 20 with Covay's song "Letter Full of Tears", and Wilson Pickett recorded Covay's "I'm Gonna Cry (Cry Baby)" as his first single on Atlantic.

His singing career continued to falter until 1964, when he had one of his biggest pop hits on the small, Atlantic-distributed Rosemart label with "Mercy, Mercy", co-written with Goodtimers guitarist Ronnie Miller, which established his earthy bluesy style and featured a young Jimi Hendrix on guitar. The following year the song was recorded by the Rolling Stones for their album Out of Our Heads, on which Mick Jagger closely followed Covay's singing style.[4]

Atlantic bought Covay's contract and minor R&B hits followed, but it was a year before Covay returned to the pop chart, with "See-Saw", co-written with guitarist Steve Cropper and recorded at Stax, along with "I Never Get Enough of Your Love", "Sookie Sookie" (both also co-written by Covay and Cropper), and "Iron Out the Rough Spots" (by Cropper, Booker T. Jones, and David Porter).[6] His relationship with Stax's staff has been described as difficult, both with its musicians[7][8] and with its management,[9]

Cropper ascribes this to a clash between executive Jim Stewart's more conservative persona and Covay's unpredictable creative character. Cropper emphasized his appreciation of Covay: "I loved Don to death. We get along great but I don't think Jim and them understood Don. He thinks in different areas and he was kind of driving people bananas".[9] According to Carla Thomas, the musicians enjoyed working with artists sent by Atlantic, including Covay and Wilson Pickett, but resented having to give them studio time.[8] On "See-Saw", Covay "achieved an even more powerfully soulful edge", but he did not maintain momentum as a performer, and most of his later recordings for Atlantic failed to chart.

However, his songwriting continued to be successful, as he wrote songs for Etta James, Otis Redding, Little Richard (his 1965 hit, "I Don't Know What You Got but It's Got Me"), and notably Aretha Franklin, who had a hit in 1968 with "Chain of Fools", a song Covay had written some fifteen years earlier. Franklin won a Grammy for her performance.[4] Over the years Covay's compositions have been recorded by such varied artists as Gene Vincent, Wanda Jackson, Connie Francis, Steppenwolf, Bobby Womack, the Rolling Stones, Wilson Pickett, Small Faces, Grant Green, and Peter Wolf, among others.

Covay organized the Soul Clan, a collective venture with Solomon Burke, Joe Tex, Ben E. King and Arthur Conley, in 1968, but it was relatively unsuccessful. In 1969, he joined with former Shirelles guitarist Joe Richardson and blues and folk singer John P. Hammond to form the Jefferson Lemon Blues Band. The band had a minor hit single, "Black Woman", and recorded two albums, The House of Blue Lights and Different Strokes for Different Folks, before splitting up.

Covay joined Mercury Records in 1972, as an A&R executive, while also starting to record his album Superdude. The album yielded two of his most successful songs, "I Was Checkin' Out, She Was Checkin' In" and "Somebody's Been Enjoying My Home". He followed up with two more successful singles, "It's Better to Have (and Don't Need)" in 1974, followed by "Rumble in the Jungle", inspired by the heavyweight boxing match between Muhammad Ali and George Foreman. In the late 1970s he recorded for Philadelphia International Records but then withdrew from recording for several years, reappearing as a backing singer on the Rolling Stones' 1986 album Dirty Work.[4]

Covay had a stroke in 1992. The following year Ronnie Wood of the Rolling Stones, Iggy Pop, Todd Rundgren and others performed on a Covay tribute album, Back to the Streets: Celebrating the Music of Don Covay. He was presented with a Pioneer Award from the Rhythm and Blues Foundation in 1994.[10]

In an interview published in the UK music weekly Record Mirror in 1967, Covay said, "Singing is my first love, but I like to express my thoughts in the songs I write as well as in the way I sing them. I am always looking for experiences we all know and try to relate them through both my writing and my singing. This is why I think ‘Mercy, Mercy’ became so popular. It was down-to-earth, and everyone immediately recognized the meaning of the song from first-hand experience.”[2]

His survivors include four children, Wendy Covay of Washington, Wanda Richardson of Chicago, Ursula Covay Parkes of Queens and Antonio Covay of Suitland, Maryland; three brothers, Eddie Randolph of Washington, Thomas Randolph of the Bronx, and Leroy Randolph of Brooklyn; and five grandchildren.[2]

This article uses material from the article Don Covay from the free encyclopedia Wikipedia and it is licensed under the GNU Free Documentation License.