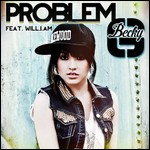 Rebbeca[1] Marie Gomez (born March 2, 1997), known better by her stage name Becky G, is a Mexican-American hip hop singer, rapper, songwriter and dancer from Inglewood, California. She began to gain recognition in 2011, after she posted several videos of herself performing remixes of popular songs on YouTube. Becky later compiled these covers into her first full-length project, a mixtape entitled @itsbeckygomez. She wrote the song Oath performed by Cher Lloyd and was asked to perform a verse by the singer in the song, "Wish U Were Here" by Cody Simpson, and a remix of "Die Young" by Ke$ha. Becky released her debut single "Becky from the Block" in April 2013. The music video was released on April 8, 2013.

Gomez was raised in the Los Angeles California, area. She spent her early childhood in Moreno Valley California, but financial struggles forced her family to sell their home and move into the converted garage of her grandparent's house in Inglewood, California when Becky was nine years old.[1] She is of Mexican descent. Gomez wanted to earn money to help out her family and began doing work including voice-overs and commercials. She also performed in two girl bands, G.L.A.M. and B.C.G.[2]

Beginning in 2011, Gomez began releasing remix videos through YouTube [3] featuring her own lyrics rapped on top of popular hip-hop and pop songs. These songs were to be released on a mixtape entitled @itsbeckygomez. Her cover of Kanye West and Jay-Z's song "Otis", released on September 15, 2011, caught the attention of veteran song-writer Dr. Luke who signed Becky to his Sony Music Entertainment imprint label Kemosabe Records.

On June 12, 2012, Australian singer Cody Simpson released his single "Wish U Were Here" which Gomez co-wrote and is featured on. She released an original song "Turn the Music Up" through YouTube in July 2012. On October 2, 2012 British singer Cher Lloyd released her single "Oath" both written by and featuring Becky G, "Oath" sold more than 140,000 copies in the United States, peaking at number 73 on the Billboard Hot 100. Gomez released her first single "Problem" featuring Will.i.am, which was subsequently remixed into "Problem (The Monster Remix)" for the Sony Pictures Animation film Hotel Transylvania.[4] Later on September 13, 2012 she released a music video for the single. On November 23, 2012 American Singer Ke$ha released a remix of her hit single "Die Young" which features Gomez alongside Juicy J and Wiz Khalifa. She started working on her remix "Becky from the Block" from JLo's album known as "Jenny from the Block" and shot the music video.[5] On May 6, 2013 Gomez released the video for Play It Again which serves as the next promotional single of her career and first taken from her upcoming debut studio album, still untitled, thats scheduled for release on spring next year. Gomez released her new EP "Play It Again" on July 16, 2013. It features four previously unheard tracks - "Can't Get Enough", which features Pitbull, "Built for This", "Zoomin' Zoomin'", and "Lovin What You Do."[6] Becky G appeared alongside American singer Jasmine V, on the cover of Latina magazine's February 2014 issue.[7][8] Becky G will open for Katy Perry for four stops on her Prismatic World Tour, two in Houston, TX and two in Mexico.

This article uses material from the article Becky G from the free encyclopedia Wikipedia and it is licensed under the GNU Free Documentation License.