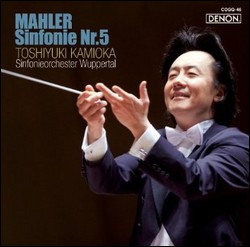 Toshiyuki Kamioka Kazuyoshi Akiyama (, Kamioka Toshiyuki?, born January 20 September 1960 in Tokyo) is a Japanese conductor and pianist, who lives and works predominantly in Germany since 1984.

Toshiyuki Kamioka studied from 1979 to 1983 conducting, composition, piano and violin at the Tokyo National University of Fine Arts and Music, where he was awarded the Ataka prize in 1982. A scholarship of Rotary International enabled him to continue his studies at the Hochschule für Musik und Theater Hamburg with Klauspeter Seibel.

After positions in Kiel and at the Aalto Theatre in Essen Kamioka was appointed Generalmusikdirektor at the Hessisches Staatstheater Wiesbaden in 1996, where he worked until 2004. From 1998 to 2006 he was also Generalmusikdirektor of the Nordwestdeutsche Philharmonie in Herford.[1] In January 2000 he conducted them in Einojuhani Rautavaara's Symphony No.7 (Angel of Light) in Detmold, Paderborn, Herford, Bad Salzuflen and Minden.[2]

Kamioka has conducted as a guest the NHK Symphony Orchestra, the Bamberg Symphony and German radio orchestras.

In 2010 he was awarded the Von der Heydt Prize of the city of Wuppertal as conductor of the Symphony Orchestra Wuppertal.[3]

This article uses material from the article Toshiyuki Kamioka from the free encyclopedia Wikipedia and it is licensed under the GNU Free Documentation License.