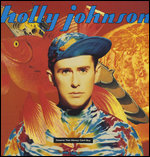 William Holly Johnson[1] (born 9 February 1960), born William Johnson and known professionally as Holly Johnson, is an English artist, musician, and writer, best known as the lead vocalist of Frankie Goes to Hollywood, who achieved huge commercial success in the mid-1980s. Prior to that, in the late 1970s he was a bassist for the band Big in Japan. In 1989, Johnson's debut solo album, Blast, reached number one in the UK albums chart. Two singles from the album – "Love Train" and "Americanos" – reached the top 5 of the UK Singles Chart. In the 1990s he also embarked on writing, painting, and printmaking careers.[2]

Holly Johnson was born on 9 February 1960 in Liverpool to Eric and Pat (née McGlouchlin) Johnson. Johnson was the third of four children and was nicknamed Billy as a child. He started his education in Liverpool at St Mary's Church of England primary school and at age eleven went to the Liverpool Collegiate Grammar School for Boys.

During his second year there, Johnson and his friend were teased and nicknamed "Jolly Johnson" and "Honey Heath". The two shared an interest in Marc Bolan and David Bowie. While he attended Liverpool Collegiate in Everton, Johnson was actively involved in that city's punk rock/new wave scene of the late 1970s. Johnson played bass with the local band Big in Japan and also released two solo singles on the Eric's label. Both "Yankee Rose" and "Hobo Joe" failed to chart, however. Johnson met his partner, Wolfgang Kuhle, in the early 1980s.

Kuhle, Johnson's personal manager, became a successful art dealer and collected paintings by Duncan Grant and Vanessa Bell. In 1982, Johnson joined Frankie Goes to Hollywood, and he later found fame as the lead singer and lyricist of the band. Frankie Goes to Hollywood experienced both controversy and phenomenal commercial success during 1984. Johnson claims to have grasped the nickname "Holly" from Lou Reed's "Walk on the Wild Side", which was playing on a dance floor when someone asked for his name. In 1987, tension grew between Johnson and the rest of his group. He also had an argument with his record company and won a case in court against them on restraint of trade. He left Frankie Goes To Hollywood and the other members of the band were eventually let go by the label after the court case ZTT and Perfect Songs v Holly Johnson.

In 1991, Johnson was diagnosed with HIV and wrote an autobiography, A Bone In My Flute; he did not expect to live much longer. Johnson remained creative working as a painter and printmaker and writing songs until 1994 when he returned to performing music occasionally. [3]

After gaining some measure of local celebrity from being a member of Big In Japan, Johnson became involved with a group of younger musicians who together would become the nucleus of Frankie Goes to Hollywood. Johnson himself named the new band[4] after seeing the headline of an article about Frank Sinatra. This new band quickly gained a reputation for their stage show which had strong SM overtones. It was during this period that guitarist Brian Nash and backing vocalist Paul Rutherford completed the band's established line up.

After the band's reputation grew large enough to attract record company interest, they were eventually signed to a new record company, ZTT. Johnson became exposed to the general public via the phenomenal success of their debut single Relax, which was a huge, and controversial, hit in 1984. After such success during 1984, when the band spent nearly four months at the top of the singles chart, Johnson was firmly established as a household name. By autumn 1986, his star had faded considerably. Frankie Goes to Hollywood had not released any material since early 1985 and were absent from that year's Live Aid event.

In addition, he did not perform on the successful charity single "Do They Know It's Christmas" by Band Aid in December 1984. By 1987 his relationship with the rest of the band had broken down irretrievably, not helped by his decision to gain legal rights to exclusive use of the band's name, without consultation with other members.[4] The UK Intellectual Property Office ruled against Mr Johnson, however, and during a reunion on the TV show Bands Reunited many years later, refused to perform with them but did not rule out a future possibility. In his own words; "If it happens, we do it properly. We have a reputation. I'm not a wedding singer!"[5]

Johnson left Frankie Goes to Hollywood in 1987 because of disagreements regarding their musical direction. He became the subject of an injunction from the group's record company, ZTT Records, and its sister publishing company, Perfect Songs, which cited a breach of his prior recording and publishing contracts, thus barring him from pursuing a solo career with any other new label.[6] He embarked on a two-year legal battle with ZTT, the case being settled in Johnson's favour on 10 February 1988, the judge ruling that the original contracts had constituted an unreasonable restraint of trade, remarking that "Mr. Johnson could be 70 years old and still be bound to this contract".[6]

ZTT unsuccessfully appealed against the judge's decision, the Appeal Court concluding on 26 July 1989 that the original recording and publishing contracts were "not a fair bargain".[7] The result represented a landmark legal outcome, contemporary press reports stating that the result "set a legal precedent which rocked the music business", adding that ZTT had by this time released most of its artists from their original contracts.[6]

Johnson's relationship with ZTT owners Trevor Horn and Jill Sinclair broke down irretrievably due to the court case: "They, [Horn and Sinclair] have never really forgiven me for winning my freedom in the law courts", the singer said in 2001, adding that the worst part of being in FGTH was "the contract we signed with ZTT."[6]

In 1989, Johnson finally made his first solo debut with the album Blast, for MCA Records. Singles "Love Train", "Americanos" and "Atomic City" met with warm reception, the former two both charting in the UK's top 5. Johnson took part in a charity project for the Hillsborough disaster fund and recorded a popular single "Ferry Cross the Mersey" with Paul McCartney, the Christians and others. The single reached number 1 in the UK and Ireland.[8]

After the 1990 remix album Hollelujah, Johnson released his second solo album in 1991. Dreams That Money Can't Buy was a commercial failure and did not chart in the UK, while the singles "Where Has Love Gone?" and "Across the Universe" performed very poorly on UK singles chart. In November 1991, Johnson learned that he was HIV positive. This triggered a temporary withdrawal from the music business and public life in general, with one of his last TV performances around the time being at the Diamond Record Awards, Antwerp, where he performed "Americanos" and "Where Has Love Gone?".[9] His HIV status was made public during an interview with The Times in April 1993.[6]

In March 1994, Johnson's critically acclaimed autobiography A Bone in My Flute was published, in which he discusses his struggle with, and acceptance of, his homosexuality.[10][11][12] The same year, he recorded a new single, "Legendary Children (All of Them Queer)", whose lyrics referred to famous LGBT people throughout history. During 1994, he performed live at London's Gay Pride show, where he performed "Relax", "Legendary Children" and "The Power of Love".[13] The same month Holly Johnson featured on and co-wrote the single "Love and Hate" by Ryuichi Sakamoto (from his Sweet Revenge album)

In April 1998, he performed "The Power of Love" live at the Easter Gay Happening in Krefeld, Germany at Club Königsburg.[14]

Since the mid-1990s, Johnson has worked primarily as a painter. His works have been exhibited at the Tate Liverpool and the Royal Academy. He has contributed to Modern Painters and the Paul Smith-sponsored Carlos magazine. He made a musical comeback in 1999, with a self-released album called Soulstream, preceded by the 1998 promo only single "Hallelujah!". The video for the first available single "Disco Heaven" featured a cameo performance from Boy George. However, the album passed fairly unnoticed and didn't chart. The only charting single from Soulstream was a new version of "The Power of Love". For the release of Soulstream, Johnson appeared on the Jools Holland Show performing "The Power of Love" and performed the song again in 2004 for ZDF Love Songs.[15]

In August 2009, Johnson presented an hour-long show "In the Beginning" on BBC Radio 2 about the Beatles, whilst he also appeared in the new video for Frankie Goes to Hollywood's "Relax" as the DJ. Since then, he has performed The Power of Love twice in Germany, also performing the song at the opening of Life Ball 2011 in Vienna. In an interview at the Q Awards, Johnson announced plans for an album of new material. In 2010, Johnson performed "Americanos" on German TV,[16] and "Relax" on French TV. During February 2011, Johnson joined Jools Holland and his band for a version of the Animals' "The House of the Rising Sun" song, a track that Johnson covered on his Soulstream album. In August 2011, he performed a full set live at the Rewind Festival, using a mix of Frankie Goes to Hollywood songs together with some of his solo hits "Americanos", "Heaven's Here" and "Love Train".

In May 2014, Johnson announced his first UK solo tour, named "Dancing with No Fear". The seven-date tour was preceded by a new solo album, released on 15 September.[17] The album, titled Europa, was preceded by a lead single, "Follow Your Heart".[18]

The second single from Europa, "In And Out Of Love", was released on 4 September 2014 with a special pop promo directed by Chris Shepherd.[15] In October 2014 Europa entered the UK Album Chart at # 63, becoming Johnson's first album to chart in the UK since his debut Blast.[19] In December 2014, Johnson released a live album, only available as merchandise during the tour and his website titled Unleashed From the Pleasuredome.[20]

This article uses material from the article Holly Johnson from the free encyclopedia Wikipedia and it is licensed under the GNU Free Documentation License.