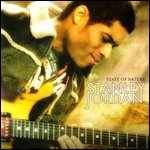 Stanley Jordan (born July 31, 1959) is an American jazz guitarist whose technique involves tapping his fingers on the fretboard of the guitar with both hands.

Jordan was born in Chicago, Illinois. When he was six, he started on piano, then at eleven switched to guitar.[1] He later began playing in rock and soul bands. In 1976, he won an award at the Reno Jazz Festival. At Princeton University, he studied music theory and composition with Milton Babbitt and computer music with Paul Lansky.[2][3] While at Princeton he played with Benny Carter and Dizzy Gillespie.[1]

In 1985, Bruce Lundvall became president of Blue Note Records and Stanley Jordan was the first person he signed. Blue Note released his album Magic Touch, which sat at No.1 on Billboard 's jazz chart for 51 weeks, setting a record.

Normally, a guitarist uses two hands to play each note. One hand presses down a guitar string behind a chosen fret to prepare the note, and the other hand either plucks or strums the string to play that note. Jordan's touch technique is an advanced form of two-handed tapping. The guitarist produces a note using only one finger by quickly tapping (or hammering) his finger down behind the appropriate fret. The impact causes the string to vibrate enough to sound the note, and the volume can be controlled by varying the force of impact. Jordan taps with both hands, and more legato than is normally associated with guitar tapping. His technique allows the guitarist to play melody and chords simultaneously. It is also possible, as he has demonstrated, to play simultaneously on two different guitars, as well as guitar and piano.

He plays guitar in all-fourths tuning, from bass to treble EADGCF (all in perfect fourths as on the bass guitar) rather than the standard EADGBE. He has stated that all-fourths tuning "simplifies the fingerboard, making it logical".[4]

Jordan's main guitar was built by Vigier Guitars in 1988: it is an Arpege model on which Vigier made a flat fingerboard, allowing it to have a very low action (0.5/0.7mm). The low action facilitates the tapping technique.

In 2004, he released the album Dreams of Peace[5] with the Italian band Novecento. The album was produced by Lino Nicolosi and Pino Nicolosi at Nicolosi Productions and was released in the U.S. on Favored Nations. He signed with Mack Avenue Records and released State of Nature in 2008 and Friends in 2011. The latter was nominated for an NAACP Image Award. He has four Grammy nominations.

Since the mid 1980s he has performed on numerous television shows, including The Tonight Show with Johnny Carson, The David Letterman Show and the Grammy Awards.

Stanley Jordan was briefly married and has one daughter, Julia Jordan, who is a singer and songwriter.[7] He attends Arizona State University, working toward a master's degree in music therapy.[7]

This article uses material from the article Stanley Jordan from the free encyclopedia Wikipedia and it is licensed under the GNU Free Documentation License.