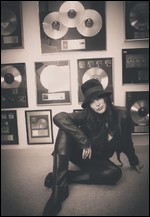 Holly Knight is an American songwriter, vocalist and musician of pop and rock music. In 2013 she was inducted into the Songwriters Hall of Fame. She has won thirteen ASCAP awards and three Grammys, and has written hits for some of the most successful artists in music.

Born in New York City,[1] Knight started playing classical piano at the age of four, continuing her studies for ten years at The Mannes School of Music.[2]

Knight started studying classical piano at age four, continuing her studies for ten years at The Mannes School of Music. She left home at sixteen to pursue her dreams. Five years later, in the early 1980s, her band Spider (featuring Anton Fig of Late Show with David Letterman), managed by Bill Aucoin, manager for Kiss and Billy Idol, among others, got a recording contract with Dreamland Records, and released two albums: Spider (self-titled; 1980) and Between the Lines (1981).

Dreamland president, songwriter and record producer Mike Chapman urged her to leave the band and move to Los Angeles to pursue her songwriting career. She signed a publishing deal with his company, eventually signing to EMI Publishing. Knight and Chapman worked together on the Top 5 U.S. hit "Better Be Good to Me" (1984) by Tina Turner and Pat Benatar's "Love Is a Battlefield" (1983), each of which won a Grammy Award for Best Female Rock Vocal Performance.

Knight has written hits for some of the most successful artists in music. For Pat Benatar, in addition to "Love Is a Battlefield", she wrote "Invincible"; she co-wrote "The Best", performed by Bonnie Tyler and later a No. 1 single around the world for Tina Turner. On her own and in collaboration with others, Knight wrote songs with Heart, Aerosmith, Bonnie Tyler, Rod Stewart, and many more. Tina Turner has recorded nine of her tunes, including "The Best", "Better Be Good to Me", and "In Your Wildest Dreams" (1996). She was voted the Best Songwriter in Rolling Stone Magazine's 11th annual poll, along with Phil Collins, Paul Simon, Billy Joel and Bruce Springsteen.

Knight had a second band called Device in the mid-1980s, who had a hit with "Hanging on a Heart Attack" off their 22B3 (1986) album. Spider and Device both had Top 40 hits, while Device was on MTV's heavy-rotation playlist for four consecutive months. Knight also released a self-titled solo album in 1988. This album featured her own rendition of the song she co-wrote, "Love is a Battlefield", as well as the single "Heart Don't Fail Me Now", which featured background vocals from Daryl Hall.

Knight wrote the theme song for the popular Joss Whedon television show Angel (1999–2004), performed by Darling Violetta. She also wrote and produced the title theme for the sitcom Still Standing (2002–2006), performed by Will Hoge, which received the ASCAP award for recognition as one of the top TV music themes of 2003, as well as the same award again in 2004.

Although primarily known for her songwriting and membership in other bands, Knight also released a self-titled solo album in 1988, which included her own rendition of "Love is a Battlefield" as well as the single "Heart Don't Fail Me Now", which featured background vocals from Daryl Hall. In the 21st century she has also been active as a record producer. In 2009 she produced a jazz EP called Natural for Antonia Bennett, daughter of Tony Bennett, and in 2012 an alternative pop record of original songs for her, entitled Ordinary Girl. In 2014 she produced a second full-length jazz record for Antonia Bennett of songs from the "Great American Songbook" called Embrace Me, on Perseverance records. She has also produced tracks for Otep, Fefe Dobson, the Australian band, Porcelain,[3] and 2014 Tony winner Lena Hall.

In 2017, she contributed a chapter to the book Because I Was A Girl, published by Holt.

Knight has two sons and lives in Los Angeles.

This article uses material from the article Holly Knight from the free encyclopedia Wikipedia and it is licensed under the GNU Free Documentation License.