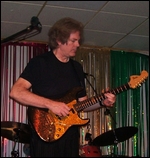 John Jorgenson (born July 6, 1956 in Madison, Wisconsin[1]) is an American musician. Although best known for his guitar work with bands such as the Desert Rose Band and The Hellecasters, Jorgenson is also proficient in the mandolin, mandocello, Dobro, pedal steel, piano, upright bass, clarinet, bassoon and saxophone.[2] While a member of the Desert Rose Band, Jorgenson won the Academy of Country Music's "Guitarist of the Year" award three consecutive years.

Jorgenson has played professionally since the age of fourteen, and had been playing both the piano and clarinet since age eight.[5]

He was born in 1956 in Madison, Wisconsin, into a musical family. His mother was a piano teacher and his father an orchestra conductor and college music professor.[6]

Jorgenson attended junior and senior high school in Redlands, California, graduating in May 1974.[7][8][8] One of his early bands in this period was named Rocking Pneumonia, circa 1971.

In his early 20s he played full-time at Disneyland, playing clarinet with the Main Street Maniacs (Dixieland), mandolin with the Thunder Mountain Boys (bluegrass) and guitar with the Rhythm Brothers (Django Reinhardt style swing). These three groups were composed of the same four members, who changed costumes and music styles at intervals throughout each day.

In 1994 Jorgenson was invited to join Elton John's band for an 18 month tour. Jorgenson remained with the band for the next six years performing both live and in the studio. His versatility was evident on stage, as he played guitar and saxophone for Elton in concert.

In 2004 Jorgenson portrayed the legendary Jazz guitarist Django Reinhardt for the film, Head in the Clouds. Jorgenson was found by the films music coordinator and consultant Scottpatrick Sellitto and Jorgensons performance was praised worldwide.

Jorgenson is also a patron for Guitar-X (Tech Music Schools) in London, which he regularly visits to hold master classes for the students.

The 2008 Brad Paisley album Play, an album that was mostly instrumental, Jorgenson was a part of the song "Cluster Pluck" and collaborated with Brad Paisley, James Burton, Vince Gill, Albert Lee, Brent Mason, Redd Volkaert and Steve Wariner for the song. The tune won a Grammy award in the Best Country Instrumental Performance category.[9]

Best known for using a variety of G&L and other electric guitars as a solo artist and as a member of the slinging guitar trio Hellecasters, John Jorgenson got his own Fender signature models in 1997.

This article uses material from the article John Jorgenson from the free encyclopedia Wikipedia and it is licensed under the GNU Free Documentation License.