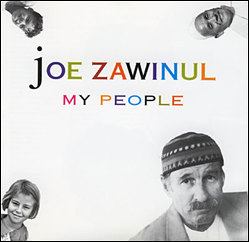 First coming to prominence with saxophonist Cannonball Adderley, Zawinul went on to play with trumpeter Miles Davis, and to become one of the creators of jazz fusion, an innovative musical genre that combined jazz with elements of rock and world music. Later, he co-founded the groups Weather Report and The Zawinul Syndicate. He pioneered the use of electric piano and synthesizer, and was named "Best Electric Keyboardist" twenty-eight times by the readers of Down Beat magazine.[2] Zawinul's playing style was often dominated by quirky melodic improvisations – traversing bebop, ethnic and pop styles – combined with sparse but rhythmic playing of big-band sounding chords or bass lines. In Weather Report, he often employed a vocoder as well as pre-recorded sounds played (i.e. filtered and transposed) through a synthesizer, a method or technique called sampling, creating a very distinctive synthesis of jazz harmonies and "noise" ("using all the sounds the world generates").

Zawinul was born and grew up in Landstraße, as a son of the worker Josef Zawinul, in Vienna, Austria, where he went to school with Thomas Klestil, who became Austrian Federal President. His grandmother was a Hungarian Sintesa ("Gypsy"), and his grandfather was from southern Moravia.

Classically trained at the Konservatorium Wien, Zawinul played in various broadcasting and studio bands before emigrating to the U.S. in 1959 on a music scholarship at Berklee School of Music in Boston.

He went on to play with trumpeter Maynard Ferguson, where he first met Wayne Shorter after having had an influence in hiring him. Shorter left soon thereafter to play in Art Blakey's group and Zawinul was apparently dismissed from the Ferguson band for wanting too much control over personnel decisions. Zawinul then toured and recorded with singer Dinah Washington from 1959 to 1961.[3]

In 1991, Zawinul was awarded an Honorary Doctorate of Music from Berklee College of Music. [4]

In 1961, Zawinul joined the Quintet led by saxophonist Cannonball Adderley.[1] During his nine-year stint with Adderley, he wrote the hit song "Mercy, Mercy, Mercy". He also composed "Walk Tall" and "Country Preacher", the latter a tribute to the American Civil Rights Movement leader Jesse Jackson, from the 1969 Country Preacher album.

In the late 1960s, Zawinul recorded with Miles Davis's studio band and helped create the sound of jazz fusion. He played on the album In a Silent Way, the title track of which he composed, and the landmark album Bitches Brew, for which he contributed the twenty-minute track "Pharaoh's Dance", which occupied the whole of side one.[1]

Zawinul is known to have played live with Davis only once, on July 10, 1991, in Paris, along with Wayne Shorter, shortly before Davis' death.[1]

Zawinul, along with other Davis sidemen Chick Corea and Herbie Hancock, was one of the first to use electric pianos and early synthesizers like the ARP 2600 in 1973's Sweetnighter. He was also among the first to use an electric piano, the Wurlitzer. He used the Fender-Rhodes thereafter, adding a wah-wah pedal and later the Mutron effect unit for a complex phased timbre. His creativity and attention to detail resulted in a very modern sound. He also played the kalimba on Weather Report's albums Mysterious Traveller and Mr. Gone.

In 1970, Zawinul co-founded Weather Report with saxophonist and Davis alumnus Wayne Shorter. Their first two years emphasized a relatively open, group improvisation format not dissimilar to what Miles Davis was doing in a more rock oriented format. However, Zawinul started making changes with their third album, Sweetnighter, stating that he was "tired of waiting for something to happen". Funk elements such as electric bass, wah-wah pedal, etc. began to be introduced to the band's sound. With their 4th album, Mysterious Traveller, the musical forms were now through-composed similar to classical music, and the combination of jazz harmonies with 1970s groove elements helped launch the band into its most commercially successful period.

The band's biggest commercial success came from his composition "Birdland", a 6-minute opus featured on Weather Report's 1977 album Heavy Weather, which peaked at number 30 on the Billboard pop albums chart. "Birdland" is one of the most recognizable jazz pieces of the 1970s, covered by many prominent artists from The Manhattan Transfer and Quincy Jones to Maynard Ferguson, the Buddy Rich Big Band, and Jefferson Starship. Even Weather Report's version received significant mainstream radio airplay – unusual for them – and served to convert many new fans to music which they may never have heard otherwise. The song won him three Grammys.

Weather Report was active until the mid-1980s, with Zawinul and Shorter remaining the sole constant members through multiple personnel shifts. The group was notable for helping bring to prominence not only pioneering fretless electric bassist Jaco Pastorius, but also other musicians, such as Alphonso Johnson and Peter Erskine. Shorter and Zawinul had already gone separate ways, after the recording of their "final" Sportin' Life, when it was discovered that they had to do one more album in order to fulfill their contract with CBS records. This Is This! therefore became the band's final album. Shorter participated despite being busy leading his own group, and Peter Erskine was also brought in again for this record, and played on most of the compositions. Victor Bailey played electric bass and guitarist Carlos Santana appeared as a guest artist on the album.

Absolute Zawinul, a CD recording by Absolute Ensemble, with music by Zawinul, is the last studio recording done during the year that Zawinul died in 2007, and features some of his original music as well as orchestrations by Absolute Ensemble member, Gene Pritsker, which he created in collaboration with Zawinul.

Zawinul also wrote a symphony, called Stories of the Danube, which was commissioned by the Brucknerhaus, Linz. It was first performed as part of the Linzer Klangwolke (a large-scale open-air broadcast event), for the opening of the 1993 Bruckner Festival in Linz. In its seven movements, the symphony traces the course of the Danube from Donaueschingen through various countries ending at the Black Sea. It was recorded in 1995 by the Czech State Philharmonic Orchestra, Brno, conducted by Caspar Richter.

Zawinul became ill and was hospitalized in his native Vienna on August 7, 2007,[5] after concluding a five-week European tour. He died a little over a month later from a rare form of skin cancer (Merkel cell carcinoma) on September 11, 2007.[6][7] He is buried in the Zentralfriedhof Cemetery in Vienna.

This article uses material from the article Joe Zawinul from the free encyclopedia Wikipedia and it is licensed under the GNU Free Documentation License.