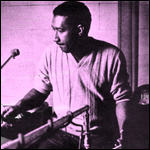 Al Jackson, Jr. (November 27, 1935 October 1, 1975) was a drummer, producer, and songwriter. He is best known as a founding member of Booker T. & the M.G.'s, a group of session musicians who worked for Stax Records and produced their own instrumentals. Jackson was called "The Human Timekeeper" for his drumming ability.

Jackson's father, Al Jackson Sr., led a jazz/swing dance band in Memphis, Tennessee. The young Jackson started drumming at an early age and began playing on stage with his father's band in 1940 at the age of five. He later played in producer/trumpeter Willie Mitchell's band and at the same time was holding down a chair in the popular Ben Branch Band. Future band mates Steve Cropper and Donald "Duck" Dunn first saw Jackson playing in Mitchell's band at the all-white Manhattan Club.

In an interview with DRUM! Magazine, Mitchell says,

Jackson became one of the most important and influential drummers in the history of recorded music at Stax, providing an instantly recognizable backbeat behind the label's artists which included Rufus Thomas, Carla Thomas, Eddie Floyd, Sam & Dave, Otis Redding, and blues guitarist Albert King, who Jackson also produced. In the Seventies, Jackson co-wrote and played on several hits by Al Green, including "Let's Stay Together" and "I'm Still in Love with You".

Four years after the last Booker T. & the MGs album, 1971's Melting Pot, the group got together and decided to wrap up all of their individual productions and devote three years to a reunion of the band.

On September 30, 1975, Al Jackson was scheduled to fly from Memphis to Detroit, Michigan, to produce a Major Lance session, when he heard a reminder on the radio about the Joe FrazierMuhammad Ali fight that night. Jackson called Detroit to delay and said he was going to watch "The Thrilla in Manila" on the big screen at the Mid-South Coliseum.

Though still legally married, Jackson was estranged from his wife. In July 1975, his wife had shot him in the chest. He decided not to press charges, but was in the process of a divorce and was planning to move to Atlanta, Georgia, to begin working with Stax singer/songwriter William Bell.[2]

Jackson attended the screening with Eddie Floyd and Terry Manning, and after the boxing, he returned home to find intruders in his house. He was reportedly told to get down on his knees and then was shot fatally five times in the back. Around 3:00 a.m. on October 1, Barbara Jackson ran out in the street, yelling for help. She told police that burglars had tied her up and then shot her husband when he returned home. Police found nothing in the house out of place and Al Jackson's wallet and jewelry were still on him.

The man believed to have pulled the trigger had reportedly known someone in Memphis and after robbing a bank in Florida, told them to meet him over at Al Jackson's house. Tracked through Florida to Memphis and then to Seattle, Washington, the suspected triggerman, the boyfriend of Barbara Jackson's friend Denise LaSalle, was killed by a police officer on July 15, 1976 after a gun battle.

This article uses material from the article Al Jackson, Jr. from the free encyclopedia Wikipedia and it is licensed under the GNU Free Documentation License.