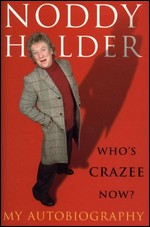 Neville John "Noddy" Holder MBE (born 15 June 1946)[1] is an English musician and actor. He was the lead vocalist and guitarist with the rock band Slade.

Holder co-wrote most of Slade's material with bassist, occasional keyboard player and violinist Jim Lea. Holder has been praised for his distinctive vocal style.

Holder was born in the Caldmore area, near the centre of Walsall, Staffordshire, England. He moved to Beechdale Estate, a council estate in the north of the town, as a child during the early 1950s. The son of a window cleaner, Holder passed the Eleven plus exam and attended a grammar school for a year until it closed.[1] He then attended the new T. P. Riley Comprehensive School and passed 6 GCE O-level exams.[2] He formed a group called The Rockin' Phantoms with school friends at the age of 13, and with money earned from a part-time job, he bought a guitar and an amplifier.[2] Holder turned professional with a band called The Memphis Cutouts and then with Steve Brett & the Mavericks in the early 60s made four singles for Columbia Records.

In 1966 drummer Don Powell persuaded Holder to join The 'NBetweens. The group already included guitarist / bass guitarist Dave Hill and bass guitarist / keyboard player / violinist / songwriter Jim Lea, and the four of them went on to eventually become Slade, one of Britain's top-selling rock bands. Slade also recorded some ballads, "Everyday" and "How Does It Feel?" in particular being widely acclaimed.

Lea and Holder turned out to be the group's most successful song-writing partnership, composing almost all of the band's songs. The band clocked up 21 hit singles and released 15 albums in their 25-year career as the original line-up.

Slade are best remembered for the single "Merry Xmas Everybody"[3] written by Holder and Lea. Holder recorded the single with Slade in 1973, and the song became the band's sixth number one and the third Slade single to go straight in at number one in the UK chart.[4] "Merry Xmas Everybody" has remained seasonally popular ever since and is a festive classic. It is regularly voted the most popular Christmas song of all time. To date, in the UK alone, sales of this song have reached several million copies.[4]

After twenty-five years with Slade, Holder left to pursue a career away from music, with regular stints as radio presenter, television personality, actor and voice over artist.

During 1982, Holder branched into production and worked with his old school friend Phil Burnell and his band Three Phase on one single "All I Want To Do Is (Fall In Love With You)", which was the band's only release. Holder and Burnell produced the single together, and it was published under Noddy Holder Music Ltd./Whild John Music Ltd., and released via Speed Records. The single did not enter the UK chart, as it received limited promotion.[5][6]

During late 1983, Holder did some production work with the American band The First, who came over to the UK from Boston, Massachusetts in America, especially to work with him, although there was never any release of material.[5] In late 1983, both Holder and Lea produced Girlschool's cover of the T-Rex song "20th Century Boy" and then the parent album "Play Dirty" which featured two Slade tracks "Burning in the Heat of Love" and "High and Dry".[7] The "High and Dry" track was originally written for Girlschool but still appeared on Slade's album that same year.[8] In 1985, Holder co-wrote, and sang backing vocals on, the single "Citizen Kane" which Lea released under his own name.[9]

In 1988, Holder recorded "Tear Into the Weekend" for a Pepsi commercial in Canada. In 1989 Holder provided vocals to help out Dave Hill (Slade Guitarist) and his newly formed group Blessings in Disguise which also featured, Ex-Wizzard keyboard player, Bill Hunt, Craig Fenney and Bob Lamb.[10] The debut single, released in 1989 for the Christmas market was a cover of The Everly Brothers "Crying in the Rain", backed by a Hill/Hunt composition, "Wild Nights".[11] The band also recorded a cover of the Elvis Presley song "A Fool Such As I" which wasn't released. The follow-up and final Blessings in Disguise single, "Chance to Be" did not feature Holder.

Holder also presented 31 episodes of Noddy's Electric Ladyland, a surreal television quiz show. He was a team captain in BBC1's music series A Question of Pop[1] and was immortalised as a puppet character Banger on the TV show Bob the Builder.[16]

In 1999 Holder's autobiography, Who's Crazee Now?, was published by Ebury. Updated in paperback in 2001 it is still available online. It was written by Holder with Lisa Verrico.[17]

Noddy was awarded the MBE in 2000 honours list for his services to showbusiness. In 1996 the singer was the subject of the This Is Your Life TV show.[1]

On 8 December 2000, Holder made a cameo appearance on the live episode of Granada Television's Coronation Street, as a character called Stan, saving the cobbles from being replaced on the street. This helped mark the 40th anniversary of the soap.[18]

Holder's voice is famously used in the lift announcements at the Walsall New Art Gallery.[19]

In November 2004, Noddy made a guest appearance in Peter Kay's Max and Paddy's Road to Nowhere - where he played a garage mechanic called Mick Bustin. The scenes were filmed in Bolton.[20] Also for the past 25 years Holder has voiced, sung and appeared in many adverts for TV, film and radio worldwide.[1]

Holder was a regular TV critic and contributor to The Radcliffe and Maconie Show on BBC Radio 2 for eight years, and the three often talked about rock star gossip from all eras.[24] Radcliffe often refers to Holder as 'Sir Nodward of Holdershire'.[25]

To celebrate his 50th professional year in showbiz, Holder toured the UK during May 2013 with Mark Radcliffe for a series of intimate 'In conversation with' shows.[26][27] Venues for the spring part of the tour include Bolton, Leeds, Durham, Telford, Preston, Redditch, Buxton and Harrogate. During the majority of shows Holder performed some short acoustic numbers.[28]

Holder was the third celebrity to be inducted onto the Birmingham Walk of Stars. 27,000 people turned out to his induction ceremony, which took place on 9 December 2007 at Birmingham's 2007 Canal Boat Light Parade.[29][30]

Since Christmas 2007, Noddy has annually recorded a TV show countdown of hit Christmas tunes.[31][32] He is the Nobby's Nuts mascot following on from the famous TV campaign.[33][34]

Holder also made an appearance on the 2008 Xmas edition of BBC's humorous news quiz show, Have I Got News for You as a member of Paul Merton's team.[35]

In 2011, Holder as 'King Of The Sizzle' fronted British Sausage Week, touring the country to find the Best British Bangers and to promote support for British farmers and butchers. Later that year, he also performed a one-man updated version of A Christmas Carol at the Union Chapel venue in London. There were interludes of music provided by an acoustic band doing unusual Christmas songs complete with two Mellotrons. With its success, the producers of the show are hoping they can take it on the road.[37][38][39]

Noddy married TV producer Suzan Price in 2004, with whom he has a son, Django (named after Django Reinhardt). From his previous marriage, to Leandra, Holder has two daughters, Jessica and Charisse.[1]

This article uses material from the article Noddy Holder from the free encyclopedia Wikipedia and it is licensed under the GNU Free Documentation License.