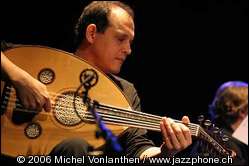 Anouar Brahem (in Tunisian Arabic أنور براهم) (born on October 20, 1957) is a Tunisian oud player and composer. He is widely acclaimed as an innovator in his field.[1] Performing primarily for a jazz audience, he fuses Arab classical music, folk music and jazz and has been recording since at least 1991, after becoming prominent in his own country in the late 1980s.[2]

Brahem was born in Halfaouine in the Medina of Tunis, Tunisia. He studied oud at Tunisia's National Conservatory of Music.[2] In 1981, he left for Paris in search of new vistas. This enabled him to meet musicians from a variety of genres. He remained there as a composer for four years, notably for Tunisian cinema and theatre. He collaborated with Maurice Béjart for his ballet Thalassa Mare Nostrum and with Gabriel Yared as lutist for Costa Gavras’ film Hanna K..

After a period back in Tunisia in the late 1980s, when Brahem was appointed director of the Ensemble musical de la ville de Tunis, he toured in the USA and Canada and then signed with ECM Records[2] with whom he has recorded a series of critically acclaimed albums.[1][3] These include "Thimar", recorded with saxophonist John Surman and bassist Dave Holland[4][5]

In playing style, Anouar Brahem is often compared to Rabih Abou-Khalil. Most often he utilizes an ensemble of three or four musicians. He has collaborated throughout his career and on several albums with other musicians: Tunisian percussionist Lassad Hosni and violinist Bechir Selmi and Turkish clarinetist Barbaros Erköse.[6] He has also performed live concerts with these same ensembles.

This article uses material from the article Anouar Brahem from the free encyclopedia Wikipedia and it is licensed under the GNU Free Documentation License.

Camille Saint-Saëns Havanaise E-Dur op.83 für Violine und Orchester
Update Required To play the media you will need to either update your browser to a recent version or update your Flash plugin.